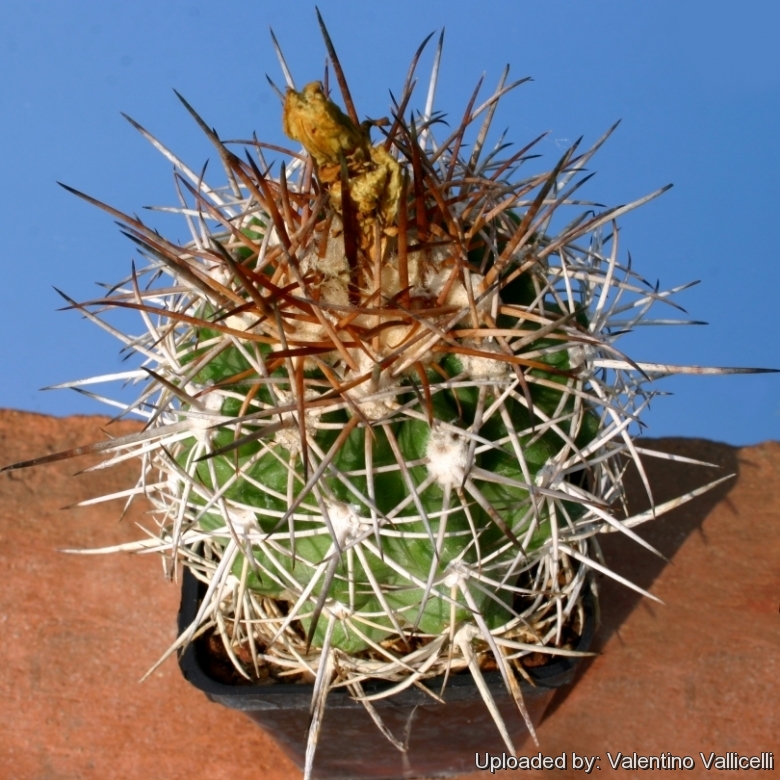 Origin and Habitat: South of the Copiapoa genus range (from the hills around the coastal towns of Coquimbo and La Serena in the province of Coquimbo) Chile.
Habitat: It grows on sandy or gravelly soils in succulent vegetation and desert scrub such as Puya chilensis, Oxalis gigantea, Heliotropium stenophyllum, Eulychnia breviflora, Adesmia argentea, Colliguaja odorifera, Flourensia thurifera and Bulnesia chilensis. The main threats in the short term are the expansion of urban areas, construction of reservoirs and farm work. While the main threat in the long term is the desertification process.

Description: Copiapoa coquimbana is a strongly spined cactus that branches vigorously from the base, forming large clumps or cushions up 1 m wide and 60 cm high and composed of several hundred heads. It's a highly variable taxon with several more or less similar forms that could be described as geographical varieties or, in some cases, critical species.
Stem: Elongated-globose, relatively soft, 7-15 cm in diameter, pale to bright green or bluish green, and crowned by a dense mass of long white wool, particularly at flowering time.
Ribs: There are 10 to 20 strongly tuberculate especially in young specimens
Tubercles: With a rounded, raised edge and a wide base.
Areoles: Apical, convex, covered with short wool when young, later glabrous, about 5-10 mm in diameter and 0,5-2 cm apart.
Radial spines: 5 to 10, stout, 1-5 cm long, fairly slender or slightly curved, horizontal, pointing outwards, narrowed angle to the central spine, honey-amber, brown or black, becoming grey with age.
Central spines: Absent or one or two thicker 3-6 cm long.
Roots: It has a shallow, diffuse root system or (less frequently) a short taproot.
Flowers: At the apex, diurnal closing at night, fragrant, protracting the period of opening many days, campanulate, 2,5-5 cm long, and they grow from the centre of the white wool at the apex. The outer segments of the perianth are linear red-brown or greenish. The inner segments are wide, blunt and yellow with a subtle red mid-stripe.
Fruit: About 15 mm in diameter reddish-brown, flowers remnants separate early from the fruit.
Seeds: 2 x 1,5 mm not shiny, surface with low and rounded bumps.

Notes: This is one of the oldest species, described in 1885 by Rümpler asEchinocactus coquimbanuss, and later transferred to the genusCopiapoa by Britton and Rose. 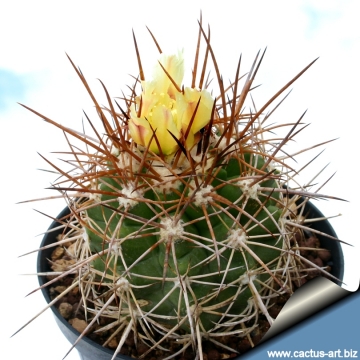 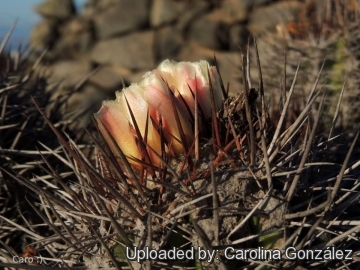 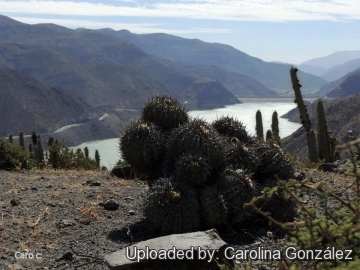 In habitat at Coquimbo. Photo by: Carolina González 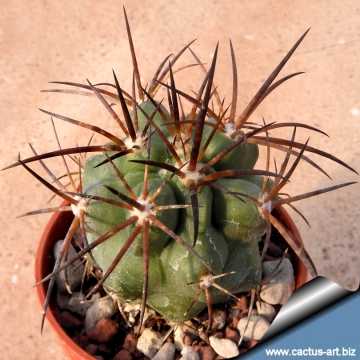 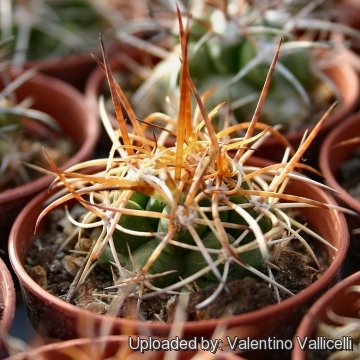 The colour of the spines varies from honey/amber to dark brown/black. Photo by: Valentino Vallicelli 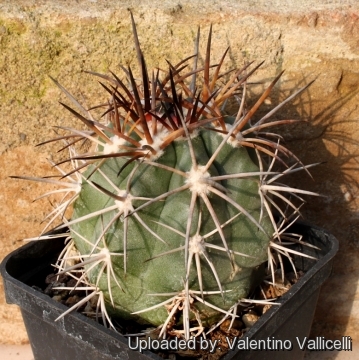 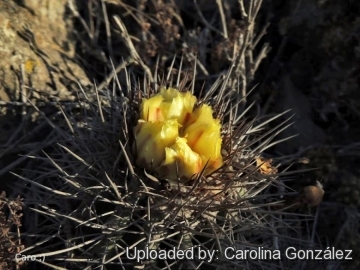 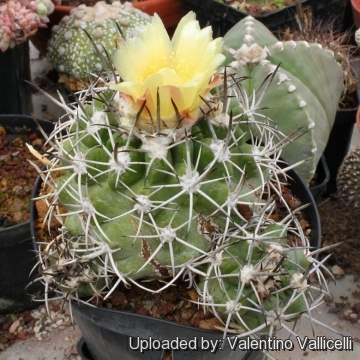 Cultivation and Propagation: Considering that Copiapoa coquimbana comes from a habitat with an extremely arid climate, they are remarkably tolerant of pot culture. These plants have taproots and are susceptible to overwatering. They requires also an appropriate air circulation. Copiapoas are summer grower species easy to cultivate.
Growth rate: This is a slow growing cactus kept for the beauty of its form that will make clumps given the best conditions.
Soils: It likes very coarse mineral cactus mix soil, but can become too elongated if compost is too rich.
Repotting: Use pot with good drainage.
Watering: It requires light but regular waterings in summer, but let the soil mix dry between waterings, but do not overwater (Rot prone), it must be strictly kept dry throughout the winter quiescent period since it is very sensitive to any moisture excesses keep dry in winter.
Fertilization: Feed with a high potassium fertilizer in summer.
Hardiness: Not highly tolerant of a great deal of frost. They need to be kept in a cool place during winter rest and are resistant to light frost if kept on the dry side prior to, and during, cold weather ( they are hardy to -2 C ° C short periods). However some warmth throughout the year will increase the grower's success (minimum 5° to 10°C during rest season).
Exposition: Requires full sun or light shade and careful watering to keep plant compact with strong coloured spines. Tends to bronze in strong light, which encourages flowering and heavy spine production. Light shadow my be useful in the hottest summer days.
Uses: It is an excellent plant for container growing. It always looks good and stays small. It look fine in a cold greenhouse and frame or outdoor in a rockery.
Pests & diseases: It may be attractive to a variety of insects, but plants in good condition should be nearly pest-free, particularly if they are grown in a mineral potting-mix, with good exposure and ventilation. Nonetheless, there are several pests to watch for:
- Red spiders: Red spiders may be effectively rubbed up by watering the infested plants from above.
- Mealy bugs: Mealy bugs occasionally develop aerial into the new growth among the wool with disfiguring results, but the worst types develop underground on the roots and are invisible except by their effects.
- Scales: Scales are rarely a problem. It is wise to treat your whole collection with a systemic insecticide twice a year in spring and autumn.
- Rot: Rot is only a minor problem with cacti if the plants are watered and “aired” correctly. If they are not, fungicides won't help all that much. To prevent rottenness it is also advisable to surround its root neck by very rough sand or grit, this help a fast water drainage.
Propagation: Seeds (or offsets if available), Grafting is often used to speed growth rate and to create a back-up to plants in collection. Seeds germinate in 7-14 days at 21-27° C in spring, remove gradually the glass cover as soon the plants will be well rooted (ca 1-2 weeks) and keep ventilated, no full sun for young plants!

by Valentino Vallicelli
There are a total of 15 Photos.
Click here to view them all!
Cite this page: "Copiapoa coquimbana" Text available under a CC-BY-SA Creative Commons Attribution License. www.llifle.com 14 Nov. 2005. 27 Jan 2023. </Encyclopedia/CACTI/Family/Cactaceae/1348/Copiapoa_coquimbana>