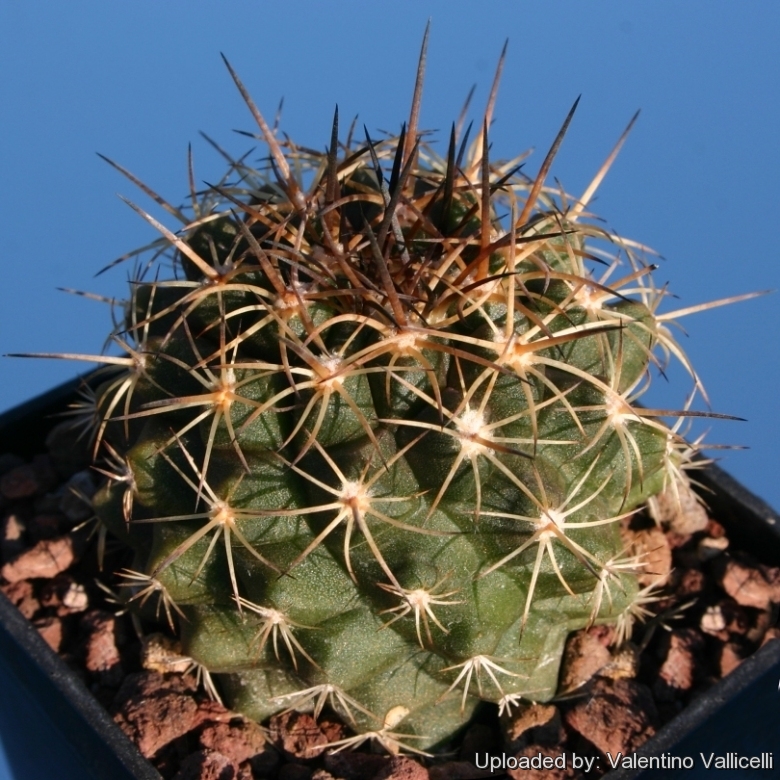 Origin and Habitat: This plant is restricted to a very small area at 18 km South-west of Domeyko (Northern range of the species)
Habitat: It grows in very dry stony environment on the side slope of the valley at an altitude of about 300 mt. It is often fund growing along with the very rare Eriosyce algarrobensis and Maihueniopsis domeykoensis .

Description: The “domeykoensis” is a giant form of C. coquimbana that is found on the far North part of the habitat of this species. These plants are very large (they are among the biggest of all Copiapoas) with long curved (but variable) spines. It is solitary or sometime form little clumps with usually not more than 3-7 individual heads. Another peculiarity of this species is the long, strong tap root that is bigger than that of the Copiapoa vallenariensis.
Stem: Globose , 20-25 (or more) cm in diameter, that branch profusely, forming large clumps up 1 m wide and 60cm high. Pale to bright green, and crowned by a dense mass of long white wool, particularly at flowering time. There are 10 to 17 tuberculate ribs, with a rounded, raised edge and a wide base.
Areoles: apical, convex, covered with short wool when young, later glabrous, about 0,5-0,8 cm, 2 cm apart.
Radial spines: 8-10, fairly slender or slightly curved, horizontal, honey-amber, brown or black, becoming gray with age.
Central spines: Usually one or two thicker, 3 to 5 (or more) cm long.
Flowers: Campanulate, 3 cm long, and they grow from the center of the white wool at the apex. The outer segments of the perianth are linear and greenish. The inner segments are wide, blunt and yellow.