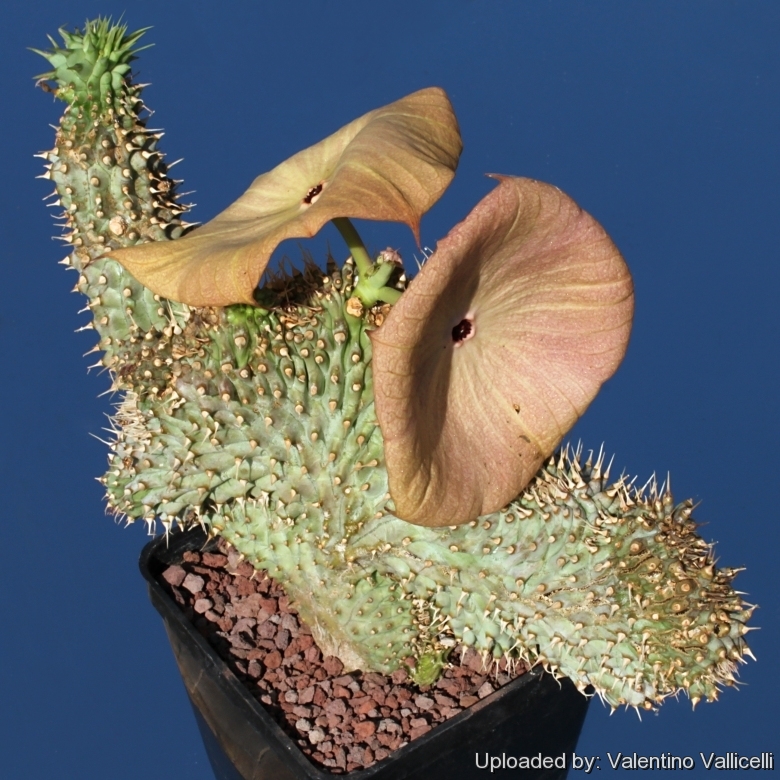 Origin and Habitat: Garden origin (Nursery produced cultivar). This specie grows naturally in a very wide area of the Kalahari desert in South Africa and Namibia. It is also found in the deserts of Botswana and Angola.
Habitat: Grows in winter-rainfall regions in deep Kalahari sands, on dry stony slopes or flats often under the protection of xerophytic bushes but it has a wide tolerance of growing habitats. In places where the temperature soars past 50°C , but it can survive in relatively low temperatures (-3°C). This area is home to a wide range of unique plant species.

Description: Hoodia gordonii is a leafless fat-stemmed and spiny succulent plant similar to a cactus. In the early stages only one stem is produced but at a later stage the plant produces clusters of green upright stem. Mature plants can have as many as 50 individual branches and weigh as much as 30 kg. Plants under ideal conditions can attain a height of 1 m. Hoodia gordonii can under ideal conditions live for 25 years in cultivation. In the wild they probably don't live much longer than 15 years.
Stem: 0,5-1 m tall, greysh-green to pale brown, stricltly cylindrical, 2,5-5 in diameter. The knobbly surface helps to scatter the sun's radiation, minimising the amount of heat they absorb.
Tubercles: Protruding, blunt, arranged in 11-17 rbs. Apically with an acute spine.
Spine: 6-12 mm long.
Flower: Saucer-shaped, strictly 5-lobed with a central depression, large up to 75 mm, pale straw, pale purple to dark maroon colored and usually with darker venation (vaguely resembleing a petunia flower) borne on or near the terminal apex (top part of the plant), inflorescence very shortly pedunculate, with group of 1-4 flowers. The flowers smell like rotten meat and are pollinated mainly by flies.
Blooming season: Flowers are normally borne in August or September. Hoodia takes duration of 5 years to be completely mature, till its flowers appear.
Fruits: The seed capsules resemble small antelope or goat horns.
Seeds: The seeds are light brown in colour, are flat and have a pappus of fluffy hair attached to their one end. This pappus acts as a parachute when the seed pod splits open. The seeds are blown some distance from the parent plant where they will establish themselves. 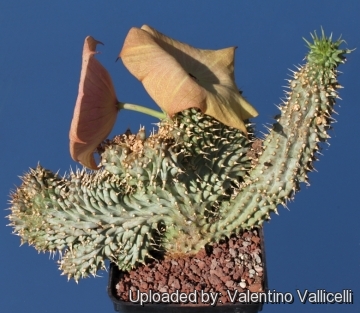 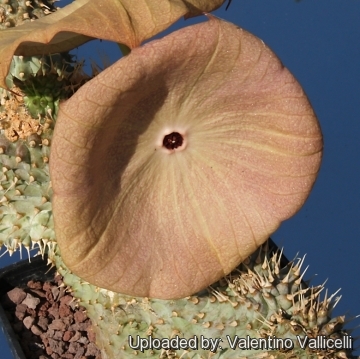 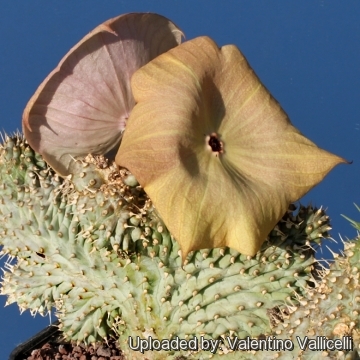 Cultivation and Propagation: It is one of easiest species to grow but prone to root rot due to overwatering and lack of fresh air.
Potting medium: Since roots are quite shallow, use a gritty, very free-draining compost. Extra perlite or pumiceis suitable, and clay pots help the plants to dry out between watering.
Moisture: Water normally in the growing season, sparsely in the winter.
Spring: In the spring leaving them out in the rain may provide them with the water they need.
Summer: In the summer months they will grow well in full sun or partial shade and tolerate heavy rain, but will be just as happy if the season is dry.
Winter: It is usually recommended to over-winter them in warm conditions (at 10° C), but despite their African origins they seem to grow well and flower without the extra heat which one might have thought necessary, and occasional temperatures near 0°C (or less) are tolerated, if kept dry.
Note: Indoors only in brightest position.
Crested growth: Unlike 'monstrose' varieties of plants, where the variation from normal growth is due to genetic mutation, crested growth can occur on normal plants. Sometimes it's due to variances in light intensity, or damage, but generally the causes are unknown. A crested plant may have some areas growing normally, and a cresting plant that looks like a brain, may revert to normal growth for no apparent reason. Any normal shoots should be removed to promote the growth of the crest.
Propagation: Propagation is done mainly from cuttings, but with uncertain results as the severed ends very rarely form a callus from where roots will eventually form.