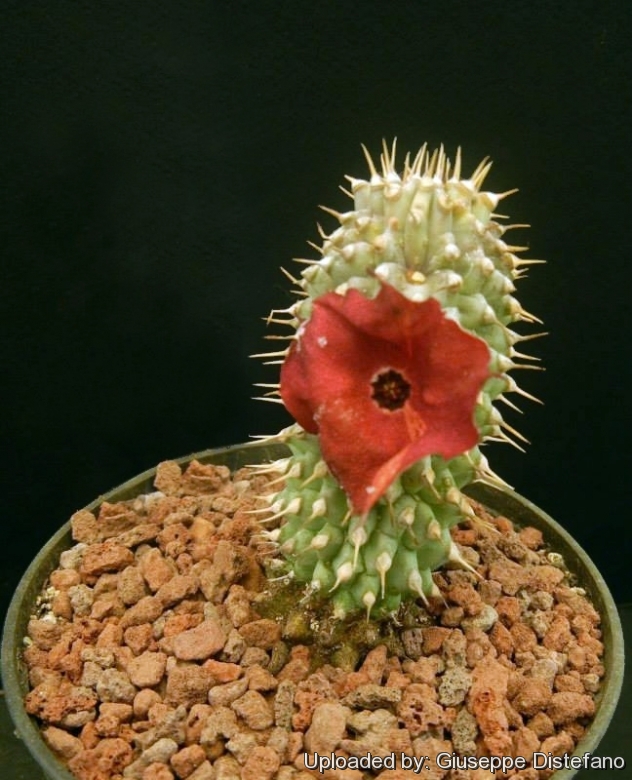 Description: Hoodia bainii has been known for quite a long time and was described in 1878. It is a local or morphological form of the variable Hoodia gordonii. It is an erect bushily branched, leafless, and spiny succulent plant similar to a cactus distinguished by the stems covered with tubercles, ending in long, woody spines. In the early stages only one stem is produced but at a later stage the plant produces clusters of upright stem from the base. Mature plants can have as many as 50 individual branches. Plants under ideal conditions can attain a height of 40 (or more) cm and can under ideal conditions live for 25 years in cultivation. In the wild they probably don't live much longer than 15 years. The flowers are saucer-shaped, slightly five lobed, dull yellow or buff coloured, fading to reddish or purple, often smaller than in H. gordonii and evil smelling. However the two plants are quite similar and it is hard to tell apart one from the others, if not for the geographical provenance. In accordance with the variability of the species the “bainii” variety is invalid and nowadays considered as a synonym.
Habit: It is perennial stem-succulent.
Stem: 15-40 cm tall, glabrous, glaucous-green, strictly cylindrical, 2,5-4 cm in diameter. The angles are broken up into compressed tubercles each bearing a spine.
Tubercles: Protruding, blunt, divided by a sharp, diagonal furrow, arranged in 12-15 ribs. Apically with an acute spine.
Spine: Pale-brown 6-10 mm long. The spines are very useful, protecting it from herbivores and reducing water loss due to evaporation by creating a thick layer of air saturated with water vapour next to the plant's surface. Spines also reflect and disperse the sun's rays.
Flower: Saucer-shaped and often almost circular in outline, strictly 5-lobed with a central depression, with a deep dish shape, are completely glabrous (even in the centre). light yellow tinged with pink, pale purple or dark maroon and usually with darker venation (vaguely resembling a petunia flower) borne singly or in two on or near the terminal apex (top part of the plant), inflorescence very shortly pedunculate. Pedicels 6-12 mm long; sepals 4-5 mm long, ovate-lanceolate, acuminate; corolla in bud hemispheric at the basal part, 5-winged above, truncate, with a short central point, when expanded (25-)50-70(-75) mm in diameter, cup-shaped, about 25 mm deep, subtruncate at the margin with 5 subulate or awn-like points 3-6 mm long, glabrous, smooth, not papillate on the central part, light yellow or pale buff, sometimes tinged with pinkish or very pale purple; tube obsolete, represented by a slight depression from which the blackish corona is exserted or its margin resting upon the rim, when dried contained in a very small cup; outer corona 3-4 mm in diameter, cupular, 5-lobed; lobes 0.5-0.7 mm long, nearly 2 mm broad, transverse, emarginate; inner corona-lobes 0.8 mm long, oblong, obtuse, closely incumbent upon the backs of the anthers and not exceeding them, dorsally connected to the inflexed sinuses of the outer corona. The flowers smell like rotten meat and are pollinated mainly by flies.
Blooming season: Flowers are normally borne in August or September. Hoodia takes duration of 5 years to be completely mature, till its flowers appear.
Fruits (follicles): Terete-fusiform, resembling small antelope or goat horns, 10-13 (or more) cm long, 10-12 mm thick, tapering to a beak, glabrous, smooth.
Seeds: The seeds are light brown in colour, smooth, 6-7 mm long, 3 mm broad, ovate, flat, with a slightly thickened margin, and have a pappus of fluffy hair attached to their one end. This pappus acts as a parachute when the seed pod splits open. The seeds are blown some distance from the parent plant where they will establish themselves.
Remarks: There are many difficulty in Hoodia identification. If we have some plants from unidentified origin ( plants provided unlabeled or with poor identification data), we have to wait until the plant is in flower and also specialists and growers have quite a difficulty to identify correctly this plants.

Notes: This plant stores its seeds, which are like parachutes, within pods that only explode and release the seeds under certain conditions. Once released, the seeds are dispersed by the wind.

Cultivation and Propagation: Hoodia bainii is one of easiest species to grow but prone to root rot due to overwaterings and lack of fresh air.
Esposure: Indoors only in brightest position.
Watering: Water normally in the growing season, sparsely in the winter.
Hardiness: It is usually recommended to over-winter them in warm conditions (at 10° C), but despite their African origins they seem to grow well and flower without the extra heat which one might have thought necessary, and occasional temperatures near 0°C (or less) are tolerated, if kept dry.
Spring: In the spring leaving them out in the rain may provide them with the water they need.
Summer: In the summer months they will grow well in full sun or partial shade and tolerate heavy rain, but will be just as happy if the season is dry.
Potting medium: Since roots are quite shallow, a gritty, very free-draining compost with extra perlite or pumiceis suitable, and clay pots help the plants to dry out between watering.
Edible uses: Commonly known as: “ghaap” the young pods are liked for their sweetniss.
Propagation: Propagation is done mainly from seed. Cuttings are not really an option, as the severed ends very rarely form a callus from where roots will eventually form. Seeds are produced in March and April of each year (Europe). The seed horns must be semi-dry and starting to split down the middle before seed can be collected. If you try to take a cutting allows it to dry several days before planting.