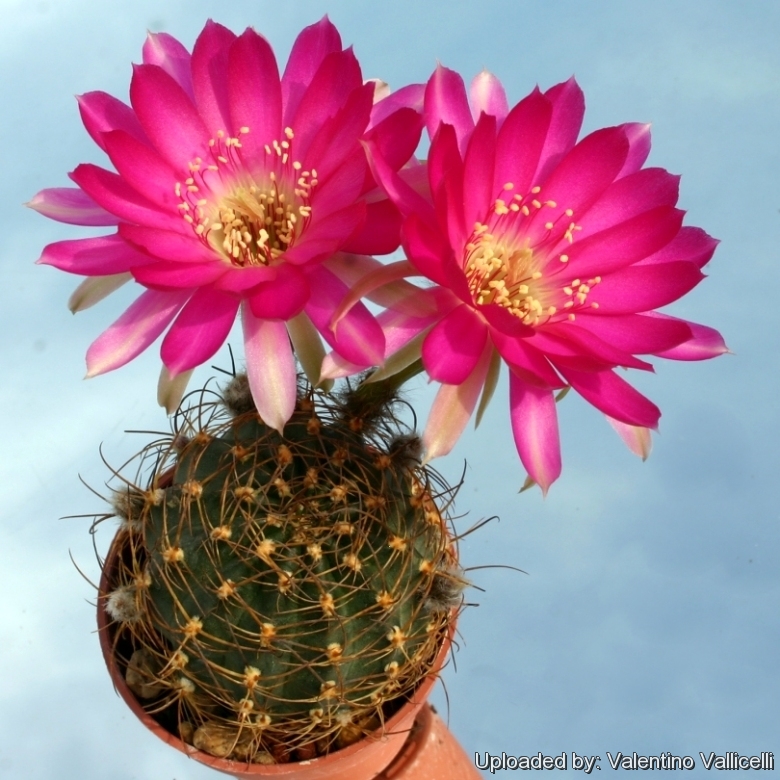 Lobivia winteriana (Echinopsis winteriana) Photo by: Valentino Vallicelli
This species is one of the most remarkable Lobivia, with large, very colourful "shocking fuchsia pink" to purple-violet flowers with white centre. Everyone should have this plant.

Description: Echinopsis winteriana, better known as Lobivia winteriana is one of the many geographical form of Echinopsis backebergii. Many of its morphological and geographical variant was early classified as different independent species, but nowadays all this plant are considered part of a multiform species, where each form is linked to others by populations of plants with intermediate characteristics. Echinopsis winteriana has distinctive bright fuchsia pink petals that contrast nicely with the with a paler or white throat. It is a very prolific bloomer, if you keep it reasonably cool and absolutely dry during winter. The species is however controversial and is now fully synonymized with Echinopsis backebergii.
Habit: It is a small solitary or basally branched cactus, older plants may form mats.
Stem: At first globular becoming cylindrical as it ages, diameter about 5-7 cm. Epidermis greys-green.
Ribs: 13-19 more or le spiralling.
Root: Napiform (Carrot like).
Areoles: Oval with dull white felt.
Radial spines: 6-14 short, about 4-7 mm long, thin, unequal, curved backward somehow pectinated, pale brown, yellow or amber when young, later greys.
Central spines: None or sometime 1 stouter about 1-3 cm long, darker with black tip.
Flowers: Large, funnel shaped, very colourful fuchsia pink to purple-violet, often with a bluish sheen and white throats 7,5-9 cm in diameter. Tepals lanceolate.
Fruit: About 1,5 cm in long, tannish-green to brownish-red.
Seed: Black. 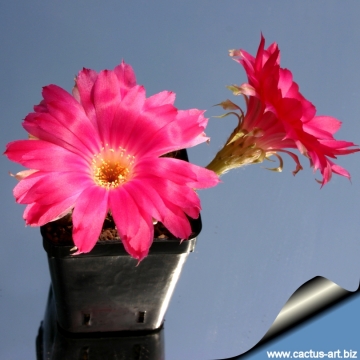 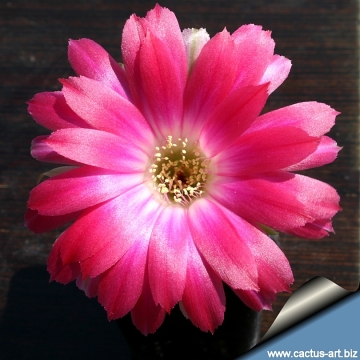 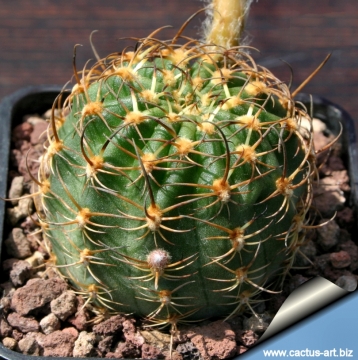 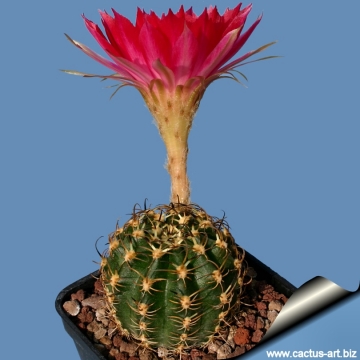 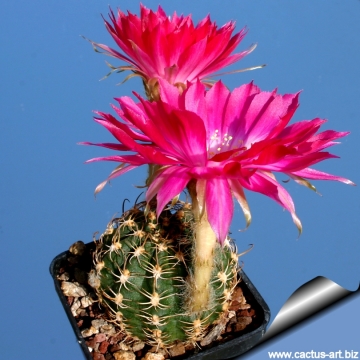 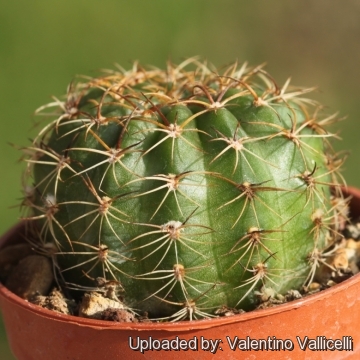 Cultivation and Propagation: Echinopsis winteriana grows rather slowly and it is sensitive to overwatering (rot prone) and needs a very good drainage to avoid rotting, but requires more moisture than true desert cacti to grow and produce flower. It is a very easy flowerer, if you keep it reasonably cool and absolutely dry during winter and lots of fresh air and sunshine tends to produce better plants and more flowers.
Soil: Use a loose well drained cactus mix.
Repotting: It require a deep pot suited to accommodate the swollen root, repotting with fresh potting-mix should be done every other year or when the plant has outgrown its pot. However, repotting doesn't necessarily mean they'll need larger containers.
Sun Exposure: Light shade when young, full sun later. Outside it likes strong sunshine, but is tolerant and do well with light shade during the hot Summer months. Tends to bronze in strong light, which encourages spine production.
Hardiness: It is cold resistant to -10° ( or even less depending on clones) for short periods of time. It will show its flowers only if we provide an adequate winter rest period.
Watering: Water regularly through the growing season. This can be done weekly or more frequently during the summertime, if the weather is sunny enough, but allow to dry fully before watering again. Kept this way, plants will show a healthy growth. Keep rather dry as soon as the temperature starts dropping in October and keep it dry in winter. The plant survives outside without protection in winter but is then somewhat prone to rot, too.
Fertilization: Give an occasional high potassium liquid feed during the active growing period.
Garden uses: It is a fine plant for a rock garden or container, contrasts well with agaves, yuccas, and low-growing flowering plants.
Pest and diseases: They are generally fairly easy to grow, especially if kept pest-free. They are susceptible to, scale insects and spider mite. Watch carefully for infestations of stem and root mealy bugs, and damage from these may well initiate fungal attack.
Propagation: Seeds, also can be grown from cutting as it branches from the base. Take cuttings spring or summer, let them dry till the ends callous well. Then replant them in fresh cactus soil that is ever so slightly moist, and keep it that way till they root. Surface sowing is the best; seeds germinate in 14-28 days at 20° C , remembering that seedlings dislike strong light and dry conditions.