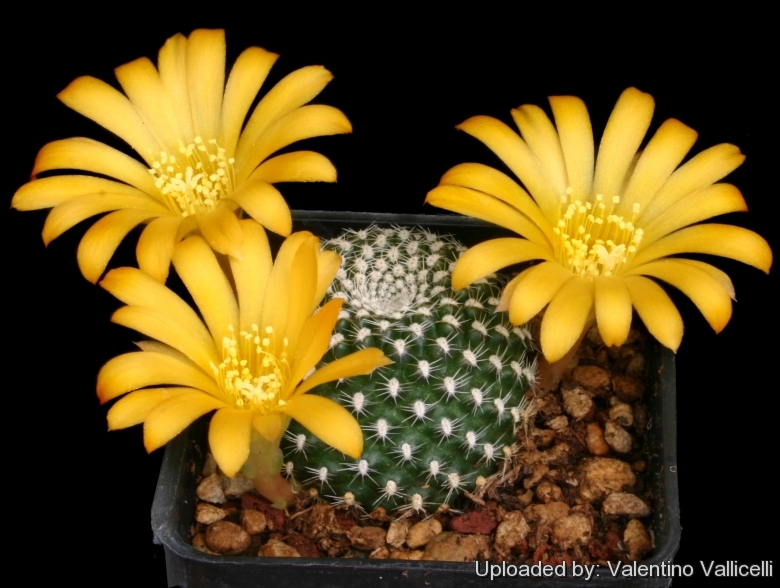 Origin and Habitat: Jujuy to Salta (Argentina)
Habitat and Ecology: The species grows in yunga forest on rocky outcrops. It is a rugged area with the high peaks separated by deep valleys, this has resulted in numerous localized forms of these plants, a factor that has resulted in their classification and nomenclature (scientific names) being in a bit of a chaotic state. The major threats are illegal collection and land use change due to agriculture and farming.

Description: Rebutia marsoneri is a small and very free flowering cactus species with bright yellow to bright orange blooms. The spines are thin and bristly and varies considerably in length depending on clones. The species is strictly related and often synonymized with Rebutia minuscula.
Habit: It is a solitary or clumping globular cactus that begins to offset in about its third or fourth year, eventually making a moderately tight clump. It can grow clumps 10-15 cm wide.
Stem: Symmetrically, depressed globose, 4-6(-7) cm in diameter and 4-6(-10) cm tall, light green to dark green, although it becomes grey as it ages.
Tubercles: Low, rounded in two downward spirals, in ratio 8:13.
Areoles Small, round, brownish white.
Spines: Up to 30(-35) in a nestshaped cluster, very thin, short bristle-like, flexible to somewhat stout, brownish to golden yellow to white, usually with dark tips, variable in length from 3 to 15 mm long and often inconspicuous.
Flowers: Rebutia marsoneri develops a larger crop of flowers from the base of each head, resulting in a superb display in mid season. The "normal" form has bright golden yellow to orange or orange-red flowers 35-45 mm long, 30-35 mm in diameter.
Fruits: Globose, brownish, to 5 mm in diameter.
Blooming season: It is usually one of the earliest rebutias to flower in spring and has a very long lasting and continuous blooming period.

Subspecies, varieties, forms and cultivars of plants belonging to the Rebutia marsoneri group 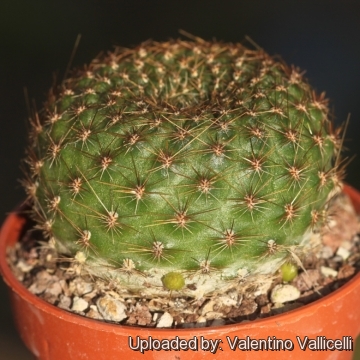 Rebutia marsoneri Photo by: Valentino Vallicelli
Send a photo of this plant.

Cultivation and Propagation: Full sun to light shade. Water regularly in summer but do not over-water. Keep dry in winter. Hardy down to -4°C.
It is better that they be repotted regularly. Repotting will increase the number and size of stems, and will increase the number of flowers produced. Repot yearly until it reaches about 100 mm in size, then every two or three years will suffice. Repotting is best done at the end of winter, but it can be done at other time, too. Do not water for a couple of weeks after repotting, in order to reduce risk of root rot via broken roots.