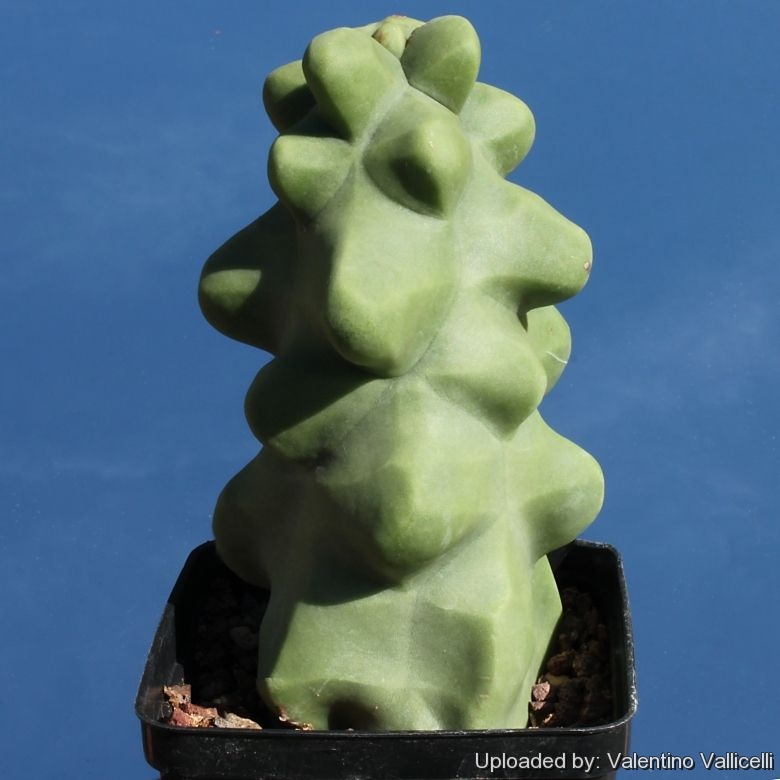 Origin and Habitat: It is native to the desert regions of mainland Mexico and the Baja California peninsula of Mexico. Small populations also occur in the extreme south of Arizona. The monstrous form is restricted to a small area NE of El Arco, about halfway down the Baja peninsula.
Habitat: It tends to grow in colonies in favourable locations on rocky hillsides. It grows mainly on alluvial plains in dry gravely soils and in desert riparian environments, but its northern limit in southern California can get frosts that can occur on the flat sites where it grows. Here plants are smaller in size than their more southerly counterparts. Reproduction in this part of its range is predominantly asexual and occurs either by the dispersal of stems in the immediate vicinity of parents, or by the long-distance transport of detached stem pieces downstream by floodwaters. Wild plants are heavily weathered and badly marked with just the newest growing tips in good condition.
Lophocereus schottii mostruosa is a naturally occurring mutation, which, although sterile, continues to survive in the wild. This growth form occurs naturally in at least two wild populations in a very soft sandy and gravely soil. In these two locations the plants persist because stem sections break off periodically and root along the sides to produce new plants.
Ecology: Lophocereus schottii has recently been found to have a mutualistic association with a moth, which pollinates the small flowers and lays its eggs in them so that the larvae can develop by feeding on the fruit tissues.

Description: Lophocereus schottii (Now Pachycereus) is a slow-growing usually trunkless cactus that forms numerous tall, ascending, columnar stems which branch at the base in a candelabra-like arrangement. Stems have a waxy bloom on the surface and reach a height of 3-4 metres (but can grow up to 7m high) and are 10 to 12cm in diameter. They have five to nine widely-spaced ribs. One of the most distinguishing features is that the tips of the mature, taller stems are covered with about twenty sharp long, hairlike, grey bristles. In contrast to the long spines at the tips of mature stems, the juvenile plants have only about five short conical spines Areoles on the bottom part of the stems are woolly, oval and bears white wool. This species blooms in the apical 'hairy' part of the stems. Flowers are nocturnal, open at dusk and continue until early morning when the sun burns them out. They are 3-5 cm long, greenish white on the underside and pinkish white inside, and emit an unpleasant odour. One or several flowers are produced from each areole during most of the year, mainly from April to September. The edible fruits are as red as ripe strawberries (with a red pulp), and are seldom seen. Occasionally the ends of stems will spiral a little or dramatically in a right or left hand manner Such top cuttings are much prized by enthusiasts, fetching high prices.
Lophocereus schottii f. mostruosa This is a genetically stable mutation with variable, irregularly shaped ribs with raised, tubercle-like, knobby-looking swellings along the stems, and few (if any) spines or bristles. Stems are ascending, slim, lightly pruinose, and also branch just from the base and occasionally at higher levels, reverting sometimes to normal species growths. Some stems reach 6m, but they usually remain smaller (from 2 to 3m tall). The areoles are few and insignificant and flowers (rarely seen) are pink, seeds virtually unknown.
In habitat and cultivated specimens, the stems mark quite badly with age, due to weathering and old age. 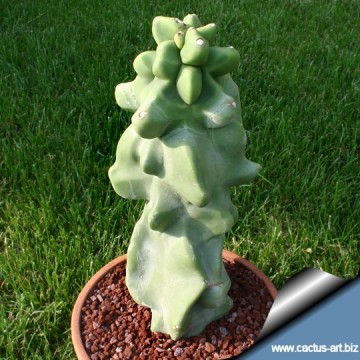 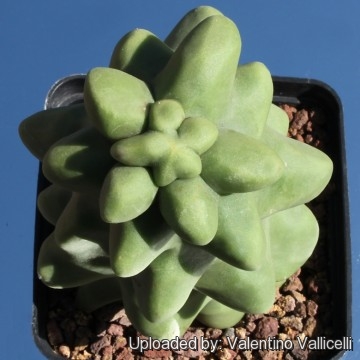 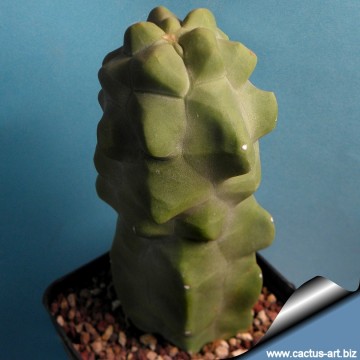 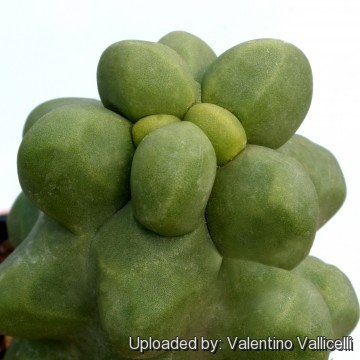 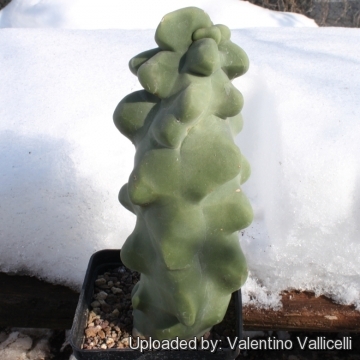 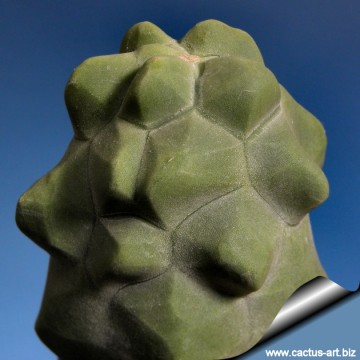 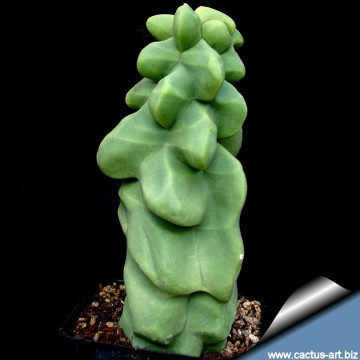 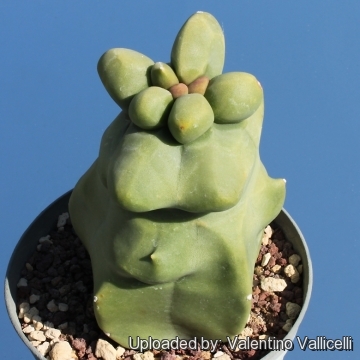 Cultivation and Propagation: This species presents no problems in cultivation and will do well in a sunny spot in a cactus house. These plants will tolerate extreme sun and heat, but not extended periods of frost. They can survive to a minimum temperature of -9°C (for Arizona clones), but the growing tips need protection. The monstrous form is more frost sensitive and should not be kept at less than -4°C . They will tolerate severe drought if they have a large colony of stems. Grow them in rich, porous, sandy soil, and let their soil dry out between waterings. If potted, repot in the spring, if their roots become cramped. Generally, they should be repotted every other year in order to provide fresh soil. However, this doesn't necessarily mean they'll need larger containers. Fill about a quarter of the pot with broken crocks, gravel, etc. to promote good drainage. After repotting, do not water for a week or more. The monstrose plants enjoy a warm sunny environment and for more speedy growth a light position on a higher shelf with light feeding and rainwater given to the bottom of the plant will ensure success, especially with rooted detached branches, which do well in these conditions. Often plants can be seen with a root or two projecting from a lower stem. Plants in cultivation will begin to get a bit tatty after several years, and if you wrap an offset in newspaper and send it to your friend through the post, it will probably get marked anyway.
Some enthusiasts sow many seeds of this plant in the hope that a monstrose seedling will appear. Finally, the greatest problem that you will ever have with this very interesting plant will be finding one to buy in the first place.
Propagation: L. schottii can be increased by seeds or cuttings. L. schottii mostruosa does not apparently flower or seed. All specimens also in cultivation must at one time have been propagated vegetatively, unless a species plant now and then yielded a fasciated seedling. It can be increased by cuttings, which will take root in a minimum temperature of 20° C. Cuttings of healthy shoots can be taken in the spring and summer, Cut the stem with a sharp, sterile knife just above a bud or shoot (a 7-10cm long tip or branch is most suitable for propagation). Leave the cutting in a warm, dry place for a week or weeks (depending on how thick the cutting is) until a callus forms over the wound. Once the callus forms, the cutting may be inserted in a container filled with firmed cactus potting mix topped with a surface layer of coarse grit. They should be placed in the coarse grit only; this prevents the cut end from becoming too wet and allows the roots to penetrate the rich compost underneath. The cuttings should root in 2 to 6 weeks.