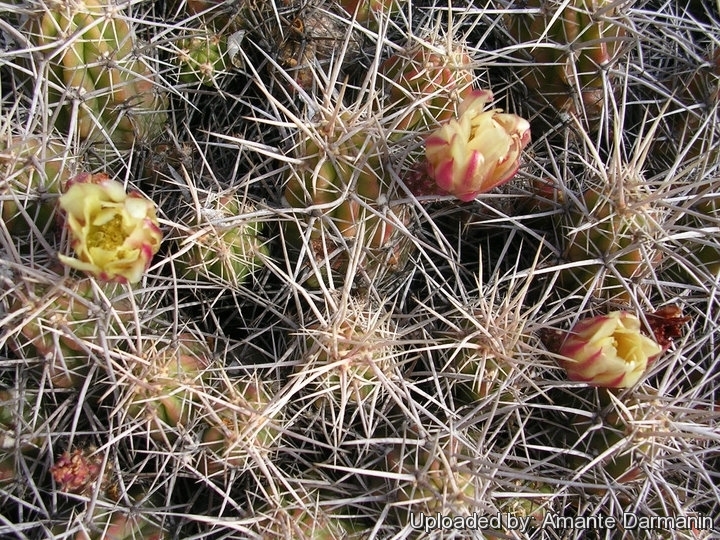 Origin and Habitat: Echinocereus maritimus is endemic to the western coast of Baja California, Mexico, and adjacent islands (Extent of occurrence of 12,000 km2).
Type locality: Ensenada, Lower California.
Altitude range: 0 to 50 metres above sea level.
Habitat and Ecology: The species occurs in littoral sand dunes and on rocks a few kilometres in land, mostly at low elevations. It grows in shrub desert and in flat sedimentary hills near coast in stony-loamy soil and sandy loamy terrain in coastal areas together with locally endemic succulents such as cliff spurge (Euphorbia misera) and Agave sebastiana; and a number of cacti (Bergerocactus emoryi, Echinocereus maritimus, Lophocereus schottii, Myrtillocactus cochal, Ferocactus fordii, Opuntia prolifera, Cochemiea pondii, Mammillaria brandegeei, and Mammillaria louisae). The major threat for this species is urban development in the coastal area in the form of fish camps which consist of informal temporary settlements of fishermen that leave a lot of rubbish behind and they also open access paths that give way to further development and impacts such as tourism disturbance. Agriculture also affects the species, mainly tomato plantations. The production of alternative sources of energy, from tides poses a threat. Even though the species occurs within protected areas the threats in most of its range will not cease in the near future.

Description: Echinoceres maritimus is a much branched, mounding cactus, forming colonies of cylindrical stems to 30(-40) cm high and 0.6-2 m wide with as many as 20(-300) stems (joints). In spring it displays its clear yellow flowers to the sun, but hides them from the moon. Echinoceres maritimus is variable throughout its range. The population on Natividad Island is sparsely spined and small, while a very robust and heavily armed form, which was described as Echinocereus hancockii (Echinocereus maritimus subs. hancockii), occurs at San Hipolito Bay. Giant forms occur also on Cedros Island.
Stems: Individual joints globose to cylindrical, light to dark green, 5-16(-30) cm high, 2,5-7 cm in diameter.
Ribs: 8-10 (or more), acute.
Areoles: 10 to 12 mm apart.
Spines: Bright red when yong, becoming dirty yellow or or horn colour fading
to grey. Central or upper spines 4 (or more), stout, strongly flattened and angled, erect, 2.5-6 cm long. Radial or lower spines, spreading, 7-10, 1.5-5 cm long.
Flowers: Small, arising below the stem tips, funnelform, light to bright yellow, including the ovary 3-4(-6) cm long and in diameter, usually not opening broadly because of interlaced spines of the plant. Inner perianth-segments oblanceolate, rounded at apex; ovary not very spiny.
Blooming season: The plants blossom occasionally over a long ﬂowering season from spring to autumn ( in habitat April through November, with a peak in May)
Fruits: Globose, green, becoming red, spiny, about 3 cm. in diameter. 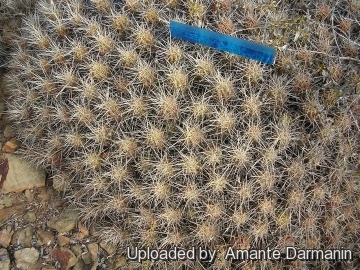