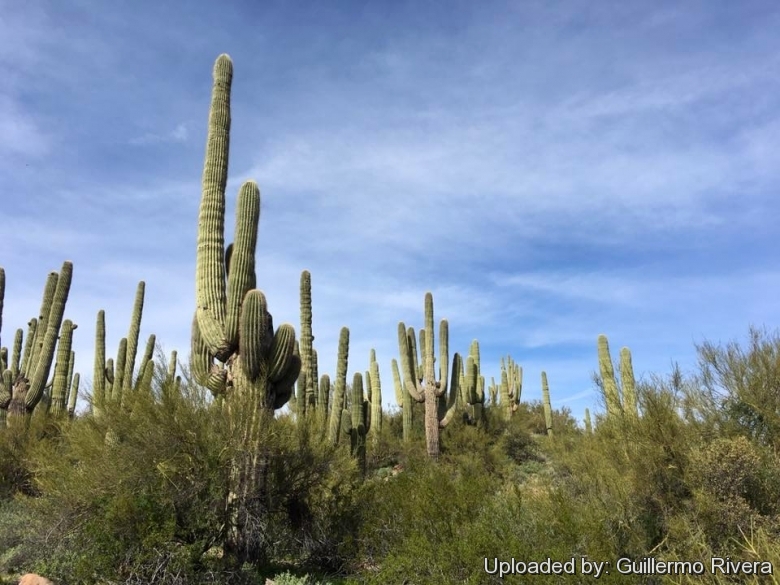 Origin and Habitat: Primarily in Arizona and in southern California just west of the Colorado River, south into Sonora, Mexico.
Altitude: From nearly sea level to approximately 1350 metres above sea level
Habitat: Sonoran Desert, where in the range is limited by freezing temperatures in winter. They are generally found growing on dry rocky slopes, upper bajadas, and well drained flats. Dense stands some-times grow on sandy flats (as near Los Vidrios, Sonora). Saguaros growing higher than 1100 m are usually found on south-facing slopes where freezing temperatures are less likely to occur, or are shorter in duration. Like many Sonoran Desert cacti, Carnegiea depends largely on warm-season rain, and west of the Colorado River, the amount of summer rain drops too low for survival. Because the mature plants use little if any soil moisture when temperatures are low, the increased winter rainfall to the west does not compensate for the dry summers.
Ecology: Bats visit the flowers at night and bees, other insects, and birds visit them during the day. Seeds are shed near the start of the summer rainy period. Dispersal agents include coyotes, peccaries, and doves. As with other large cacti, saguaros characteristically begin life beneath desert shrubs and trees, especially legumes such as Desert Ironwood (Olneya tesota) and Blue Palo Verde (Parkinsonia florida) which serve as nurse plants. However, in dryer areas the usual nurse plants are absent and saguaros begin life beneath white bursage (Ambrosia Mimosa), grasses, and even desert club-cholla (Opuntia kunzei). The same ares support many endemic succulents and xerophyte plants such as Ferocactus emoryi, Ferocactus acanthodes, Stenocereus thurberi, Lophocereus schottii, Opuntia fulgida, Opuntia leptocaulis, Opuntia acanthocarpa, Opuntia engelmannii, Echinocactus polycephalus, Echinocereus engelmannii, Fouquieria macdougalii, Fouqueria splendens, Prosopis velutina and Larrea tridentata.

Description: The giant saguaro, Carnegiea gigantea (Occasionally misspelled "Carnegia"), long popular because of its immense size and unique architecture is, perhaps, the more famous of all cacti. It is the most well-known of a group of spectacular columnar cacti from the Sonoran Desert that includes the cardons (Pachycereus pringlei), the organ-pipe cactus (Stenocereus thurberi) and senita (Lophocereus schottii).
Root: Has a shallow root system with small roots radiating out the height of the cactus and the some. No taproot.
Habit. It is a large, treelike, columnar, perennial succulent that has one or more founded arms from a single, thick trunk. It usually attains the height of about 9 metres, but exceptionally it can tower as high as 16 metres and weighing more than 10 tons, dwarfing every other living thing in the desert. The morphological behaviour of Carnegiea gigantea is also quite remarkable. It shows a marked dimorphism. In its juvenile (or sterile) stage it forms a green, cylindrical solitary columnar stem up to 3 metres tall, mostly with 11-15 stem ribs. The areoles are separate, spaced about 2-3 cm apart on the ribs, with 15-30, stout, rigid spines, grey to blackish, diverging, straight the longer central of which (3,5-) 5,5-11 cm long and (0,8) 1,1-2,3 mm in diameter, these areoles not producing flowers. In mature (Adult or fertile) stage it start branching forming stems with shallow, blunt ribs often 19-25. Areoles closely set with flexible, bristly spines 2,2-3 cm long and 0,3-0,4 mm, producing flowers. First branches usually arising in the region of transition between the juvenile and mature part, the branches fertile. The flowers and fruits are found only on the adult bristly branches, high enough to escape the grazing of herbivores.
Stem (trunk): Columnar, green, 30-75 cm in diameter, unbranched, erect, and straight with (on older plants) one to several branches originating 2-3 m above the base. Stem tissue turning black when cut or injured. The vertical ribs enable Carnegiea stems to expand as moisture is absorbed and to contract as it is used.
Flowers: White and showy 8,5-12,5 cm long, 5-6 cm in across, opening in late afternoon and remaining open until the midday or later of the following day depending on temperature, then closing permanently, funnelform to bell-shaped, with creamy white petals around a dense group of yellow stamens. Pericarpel and floral tube 6-10 cm long, covered with many distinct scales, extending down and clasping, and felted areoles. Though normally found at the end of the main trunk and arms just below the stem tips, flowers may also occur down the sides of the plant. First buds emerging on south or south-west side of the stems. Flowers will continue to be produced throughout a saguaro's lifetime. A stem might produce more than 100 flowers at a time! The saguaro has more stamens per flower than any other cactus flower. To set fruit, flowers must receive pollen from another plant or from flowers on another arm of the same plant
Fruits: Egg shaped, with scales, spine-less (or occasionally with a few bristly spines), 5-7,5(-10) cm long, 2,5–4,4 cm in diameter, fleshy, green, red or purple at maturity, dehiscent and splitting open, along three or four vertical lines, exposing the bright red interior, the pulp juicy, bright red, sweet, and edible.
Phenology: Flowers appear from late April to early June. Fruits ripen from late May until mid July while stems grow mostly during rainy periods in July, August, and September.
Seeds: Obovoid, 1,8-2,1 mm long, dark red-brown to blackish, shiny, nearly smooth, and edible.
Chromosome number n = 11.
Remarks: Saguaro and cardon (Pachyrereus pringlei), the two largest cacti in the Sonoran Desert, often occur together in western Sonora. Saguaros generally initiate branches higher off the ground and the mature stems are green rather than glaucous. Pachyrereus pringlei is a stouter, more massive plant that branches closer to the ground and has fewer (10-15) vertical ribs. The young plants, however, may be difficult to distinguish.

Notes: A saguaro's growth is extremely slow. After 15 years, the saguaro may be barely 30 cm tall tall. At about 30 years saguaros begin to flower and produce fruit. By 50 years-old the saguaro can be as tall as 2 m.. After about 75 years on average, it may sprout its first branches, or "arms". By 100 years the saguaro may have reached 7,5 m. An adult saguaro is generally considered to be about 125 years of age. Saguaros may live at least 150 years. Giant Saguaros attain the grandest sizes, towering as high as 15 m or more. Saguaros rank among the largest of any cactus or desert plant in the world. The average life span of a saguaro is at least 150 - 175 years of age. However, biologists believe that some plants may live over 200 years. One of the largest saguaros known to exist possessed these amazing statistics: It lived 300 years, was over 12 m tall, had 45 arms, and weighed 13 tons! One saguaro produces tens of thousands of seeds in a year, and as many as 40 million in a lifetime of 175 to 200 years, but out of all the seeds that a saguaro produces in a lifetime, few will survive to adulthood. 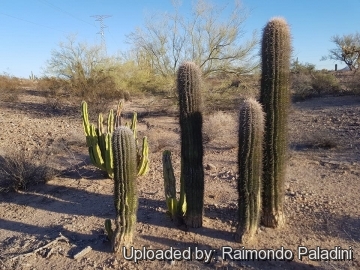 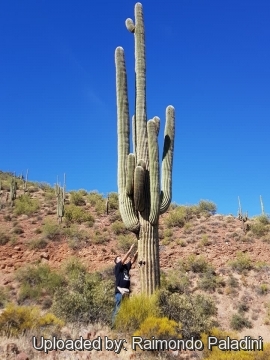 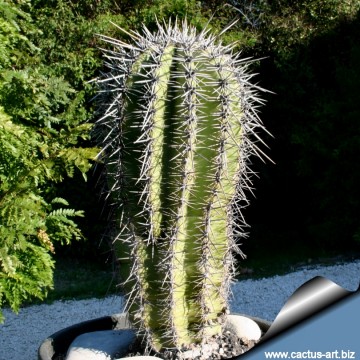 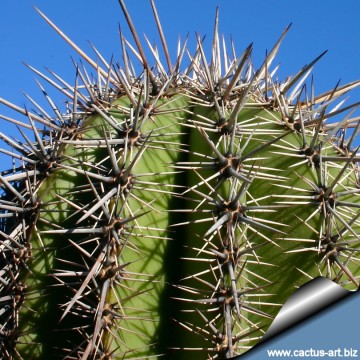 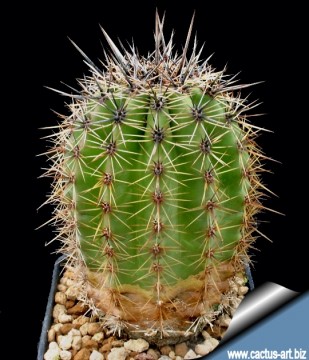 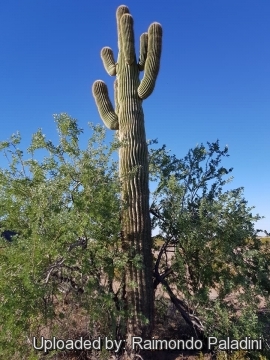 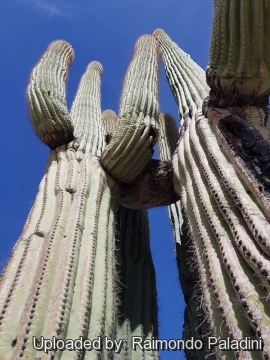 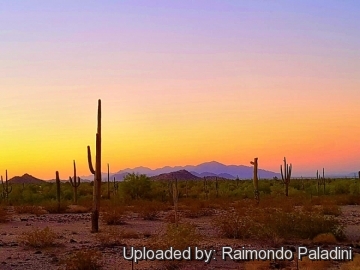 Cultivation and Propagation: The Saguaro (Carnegiea gigantea) is an easy to care cactus, but very slow growing.
Growth rate: The rate of growth may be tediously slow, in habitat it usually grows a paltry 2-4 cm per annum (but less when rains leaps years, or a little faster in favourable years). A 4 metres tall plant would be more than 100 years old at such a rate of growth. In cultivation plants are faster and can reach the height of 50 cm after 10-15 years.
Soils: It needs regular cacti soil with little organic matter (peat, humus).
Repotting: Since they are big-sized plants, they need plenty of space for their roots. Repotting should be done every other year, or when the plant has outgrown its pot. Use pot with good drainage.
Watering: Water regularly in summer, but do not overwater (very wet-sensitively, especially in light of its succulent root system) and allow to dry fully before watering again. Its roots are easily lost in pots that stay damp for any length of time. It should not be watered at all in winter. In the rest period no high atmospheric humidity!! Care must be taken with watering as they tends to become swollen and untidy in growth habit if given too much water and shade.
Fertilization: During the growing season enrich the soil using a fertilizer rich in potassium and phosphorous, but poor in nitrogen, because this chemical element doesn’t help the development of succulent plants, making them too soft and full of water.
Hardiness: Reputedly sensitive to frost , but less so if kept on the dry side prior to, and during, cold weather (hardy to -5° C for short periods). However some warmth throughout the year will increase the grower's success (minimum 5° to 8°C during rest season). In presence of high atmospheric humidity make sure that your saguaros are not exposed to freezing temperatures, or they may die. Outdoors this plant is very adaptable, as long as you avoid excessive humidity in the winter months.
Exposition: Light shade when young, full sun later. Outside it likes strong sunshine, but is tolerant and do well with light shade during the hot Summer months, inside it needs bright light, and some direct sun. Tends to bronze in strong light, which encourages spine production.
Garden uses: Excellent as landscape or patio plant. It is suitable for “desert” gardens, in association with other xerophytes. Where the open air cultivation is not possible due to the climate, it is to be cultivated in pot in order to shelter it in winter. It look fine in a cold greenhouse and frame.
Traditional uses: Used by desert dwellers, Native Americans. The fruits are delicious and have been widely gathered for food and wine-making by Sonoran Desert people. Primary Uses: Culinary. Flower buds and seeds are eaten. Flowers are seen first, then buds with seeds inside. Fruit is eaten raw; husks and seeds are boiled, baked; fruits, husks and seeds used for syrup or jam. Dehydrated pulp used for flour, also oil, soft drinks, wine, and vinegar. The skin splits and bark curls back when fruit is mature. May be dried for storage. Papago Indians make heavy syrup and intoxicating wines. It also yields surprisingly tough wood, fairly strong and light, ideal for construction.
Pests & diseases: It may be attractive to a variety of insects, but plants in good condition should be nearly pest-free, particularly if they are grown in a mineral potting-mix, with good exposure and ventilation. Nonetheless, there are several pests to watch for:
- Red spiders: Sensitive to red spider mite. Overhead watering is helpful in controlling mites.
- Mealy bugs: Occasionally mealy bugs they develop aerial into the new growth among the wool with disfiguring results, but the worst types develop underground on the roots and are invisible except by their effects.
- Scales: Scales are rarely a problem.
- Rot: Rot it is only a minor problem with cacti if the plants are watered and “aired” correctly. If they are not, fungicides won't help all that much.
Propagation: Almost exclusively by seeds as offshoots are seldom available and often fail to take root. Seeds germinate in 7-14 days at 21-27° C in spring, remove the glass cover gradually as the plants develops and keep ventilated, no full sun for young plants! The seedlings should not be disturbed until they are well rooted, after which they can be planted separately in small pots.

by Cactus Art
There are a total of 15 Photos.
Click here to view them all!
Cite this page: "Pilocereus giganteus" Text available under a CC-BY-SA Creative Commons Attribution License. www.llifle.com 14 Nov. 2005. 27 Jan 2023. </Encyclopedia/CACTI/Family/Cactaceae/6376/Pilocereus_giganteus>