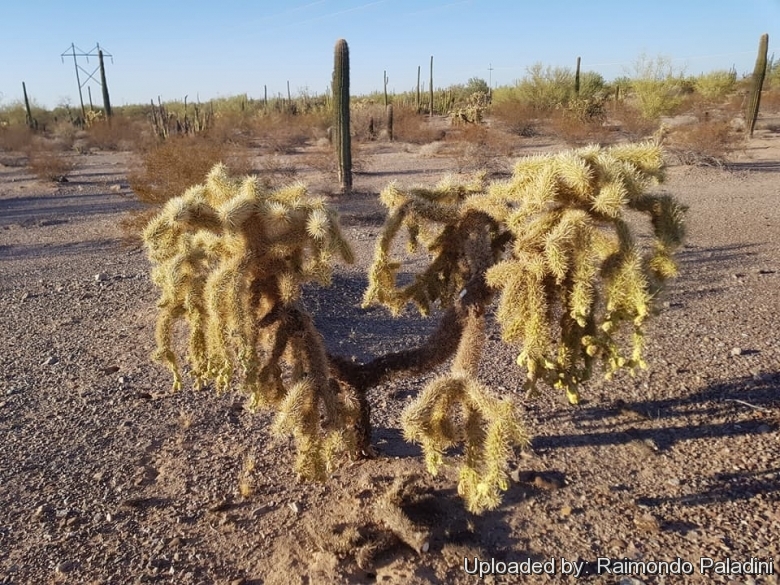 Origin and Habitat: Cylindropuntia fulgida is reported from the Mexican states of Sinaloa and Sonora (except the Sierra Madre Occidental cordillera on the east and northeast ) It does occur on the islands in the Gulf of California, including the major islands of Tiburon and Isla Angel de la Guarda. It also grows in the state of the Colorado Desert of California, and in Arizona in the United States. It also reaches into the northeast section of the Mojave Desert in southern Nevada and Utah, and in the very southern section of the Great Basin Desert of southern Utah. Together, the plants form fantastic looking forests that may range over many hectares. The species is widely cultivated in the horticultural trade and has been introduced to other countries around the world where it has escaped and has become invasive, such as South Africa and Australia.
Altitude range: It grows from near sea level to 1,00 (-1,200) metres above sea level.
Habitat and ecology: Cylindropuntia fulgida is a widespread and extremely common species with no major threats. In Arizona, this species occurs in the Sonoran desert scrubland in the desert grasslands. This species is a common plant in the Arizona high plains. In the Sonoran desert, it grows in wide open areas and in the thorn scrub of the foothills (Paredes et al. 2000). The species grows in coastal scrub, creosote scrub, and desert grasslands and is found on sandy flats and rocky slopes. In the dry season, some animals eat the fruit and the stems. The "jumping cholla" name comes from the ease with which the stems detach when brushed. The ground around a mature plant will often be covered with dead stems, and young plants are started from stems that have fallen from the adult. They attach themselves to desert animals and are dispersed for short distances. During droughts, animals like the bighorn sheep rely on the juicy fruit for food and water. Because they grow in inaccessible and hostile places of the desert, populations of this cactus are stable.

Description: Cylindropuntia fulgida (syn: Opuntia fulgida) is a very spiny shrubby or tree-like cactus 1.5-3.5(-4) m high and up to 2.4 m wide with one low-branching trunk and pale green irregular, cylindrical jointed segments bearing sharp-barbed spines that are painful and difficult to remove, and drooping branches of chained fruit. The fruits stay on the plant and the areoles on the fruits keep producing more flowers, in turn producing more fruits. The end result is characteristic chains of fruit. While the name "jumping cholla" is applied especially to this species, it is also used as a general term for all chollas. Often the merest touch will leave a person with bits of cactus hanging on their clothes to be discovered later when either sitting or leaning on them. It is the largest of the cholla; other cholla specimens are usually much smaller.
Stem: This species usually forms a single upright, central low-branching trunk; crown many branched, spreading. Stem segments (joints) many whorled or subwhorled, pale green gray-green, often drying blackish, cylindrical, segmented, irregular, 7-20 cm long. These are covered with a more or less layer of sharp spines. The terminal stems are easily dislodged spiny throughout 6-16(-23) cm long 2-3.5 cm in diameter and are strongly tuberculate, with tubercles rather elongated (broadly oval), (6-)8-13(-19) mm long. As the spines fall off of older parts, the brown-black bark is revealed. It becomes rough and scaly with age.
Areoles: Inversely triangular, 5-7 (-10) mm long, 2.5-4 mm wide; wool gold to tan, ageing grey to black.
Spines:Young branches are covered with 6 to 12(-18) spines from each areole, at most areoles to nearly absent. The in the lower part or areole are erect to deflexed, spreading, flattened basally, the longest to 3.5 cm. the ones on the upper part of areole are erect or spreading, terete to subterete, the longest to 2.5 cm. These spines have a straw-coloured or silvery-yellow baggy sheath, sometimes also pale pinkish, when young which turns a dark grey or brown colour with age. These spines, interlaced or not with spines of adjacent areoles, form a dense layer hiding the whole plant with their lustrous sheaths. The sheath acts to reflect sunlight and prevent over heating. Older branches have sparse and shorter spines. The spine showing microscopic barbs which make removal extremely painful.Glochids in adaxial tuft, sometimes also scattered along areole margins, yellow, 1-3 mm long.
Leaves: The segmented branches have light-green leaves 1.5-2.5 cm long when they are young.
Flower: White and pink, streaked with lavender about 2.5 cm in diameter. They are displayed at the joint tips (or old fruit tips), blooming in mid-summer. Inner perianth segments usually reflexed, pink to magenta, obovate to tongue shaped, 12-16 mm long, apiculate emarginate. Filaments pale pink to magenta. Anthers white to cream, Style pinkish; stigma lobes whitish to pale yellow.
Fruits: Fleshy, green, at maturity grey-green, usually spineless, pear-shaped, barrel-shaped to nearly round, fleshy, shallowly tuberculate,2.5-4 cm long, wrinkled with a few spines and usually sterile. The fruits stay on the plant and the areoles on the fruits keep producing more flowers the following year, in turn producing more fruits and the chains grow longer with every year, sometimes as long as 60 cm. The end result is characteristic pendent chains of fruit which give it the name "hanging chain cholla". Basal fruits 32-55 long 23-45 mm thick; terminal fruits 2-3.3 cm long 1.3-2.3 cm thisk; tubercles becoming obscure. Umbilicus to 8 mm deep.
Seeds:Yellow to brownish, angular to very irregular in outline, warped, small only 2-3 mm long. Seeds are not normally found in the fruit.
Chromosome number: 2n = 22 or 33.

Subspecies, varieties, forms and cultivars of plants belonging to the Cylindropuntia fulgida group 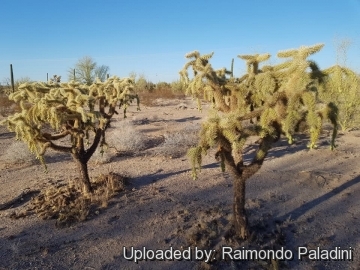 Cultivation and Propagation: Cylindropuntia fulgida has several medicinal uses, and people used to eat the fruit.