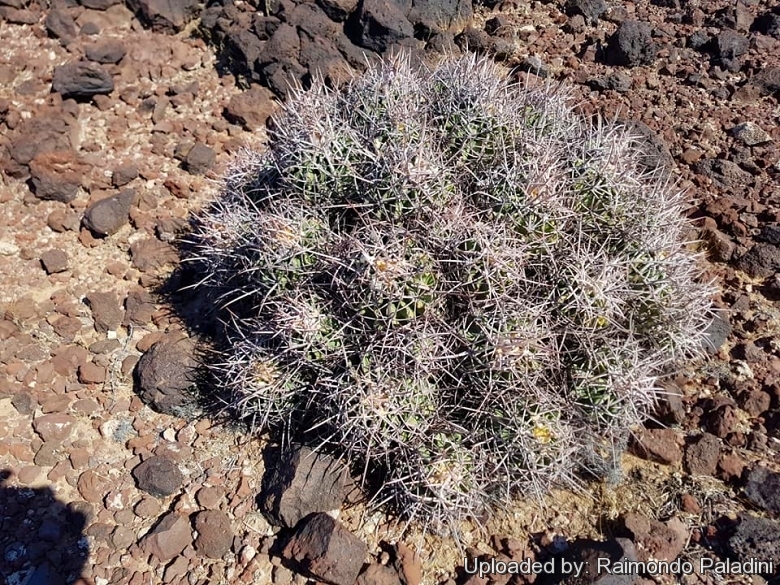 Origin and Habitat: USA (Mohave and Sonoran desert: Yuma and Mojave Co., Arizona, Inyo, San Bernardino Valley, Riverside and Imperial Co., California, Lincoln and Clark Co., Nevada), and Mexico (northwestern Sonora)
Altitude: It occurs at low elevations in the Mojave and Sonoran Deserts from 30 to 750 metres above sea level.
Habitat: It grows in rocky hills, slopes, ledges and gravelly flats of canyons both on igneous and calcareous substrates and occasionally in clayey soils of valley bottoms. It is restricted to the driest parts of desert where rarely rainfall exceeds 130 mm per annum. In the Sonoran Desert region Echinocactus polycephalus receives biseasonal rainfall over most of its range. Because of the prevailing high summer temperatures, soil moisture should be more available in winter than summer, but in the northern part of the range, where frost occurs regularly, cold undoubtedly limits the usefulness of winter soil moisture.

Description: Echinocactus polycephalus is a densely spiny cactus, solitary when young but almost always branching from the base in age and forming spreading clumps of 20-30 heads ( sometimes of more than 100 stems). The clumps are usually about 60 cm tall and up to 120 cm across.
Derivation of specific name: Polycephaly is the condition of having more than one head. The term is derived from the Greek stems poly (Greek: "πολύ") meaning "many" and kephalē (Greek: "κεφάλη") meaning "head".
Stems: Globular to short cylindrical, 10-12 cm in diameter, sometimes as much as 70 cm high but usually smaller (30-60 cm).
Ribs 13 to 21, rather stout, narrow and acute, 2 to 3 cm. high, some-what undulate, nearly hidden under the dense spine armament.
Areoles: Large, 10 to 12 mm in diameter, 1 to 3,5 cm. apart.
Spines: Dense, obscuring the stems, 7 to 15 per areole, subulate, more or less flattened, strongly cross-striated, when young covered with a downy felt but afterwards glabrate, yellow, pale grey tinged with red, or pink or light purplish after the felt peels off,.
Central spines: 4 spreading, 6-7,5 cm long, lowest one curving slightly downward, others more or less straight and flattened.
Radial spines: 6 to 8, shorter 2,5 to 5 cm long spreading irregularly, similar to centrals.
Flowers: Produced at the stems apex, yellow with pink midribs, 5 to 6 cm. long and in diameter; scales on the ovary minute, hidden under the mass of long wool borne in their axils; scales on the flower-tube numerous, only a little longer than the wool, chartaceous, pungent; inner perianth-segments linear-oblong, 2,5 to 3 cm long, entire, obtuse; style slender.
Blooming season: Summer (In its native habitat habitat bloom in July) and seeds mature about a month later.
Fruit: Globose to oblong, 1,5 to 2,5 cm long, heavily covered with white hairs, crowned by the somewhat spinescent scales, The fruit dries slowly at maturity and may persist on the plant for several months and dehisce by a basal pore through which the seeds pass easily.
Seeds: Angled, papillose, dull black, 3 to 4 mm, long; hilurn large, lateral but below the middle of the seed; embryo curved, the cotyledons buried in the large albumen.
Chromosome number: 2n = 22
Remarks: The juvenile Echinocactus looks quite different from the mature specimens. In fact, as with other Echinocactus and Ferocactus seedlings, the rib structure is not yet apparent, and they have pronounced tubercles making them look superficially like Mammillarias. This Echinocactus is unique because it branches under normal conditions. The dense, stout spines obscure the plant bodies and restrict the small yellow flowers from opening fully. The brown spines appear bright red when wet from rain. 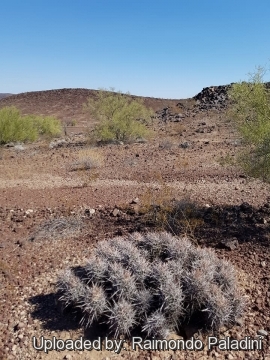 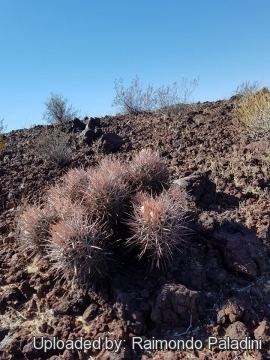 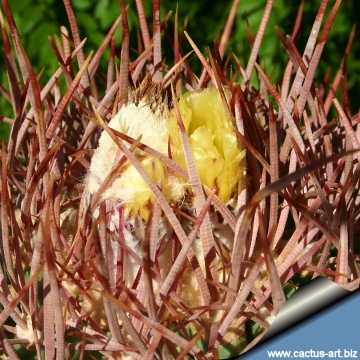 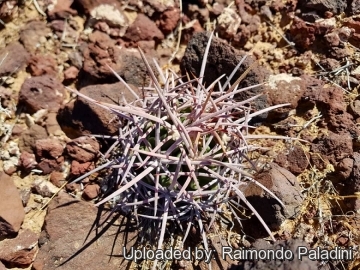 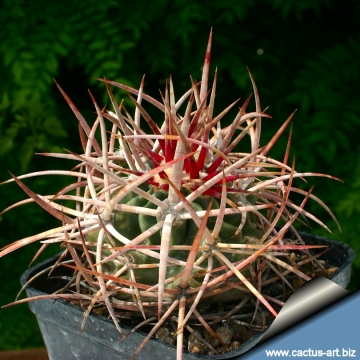 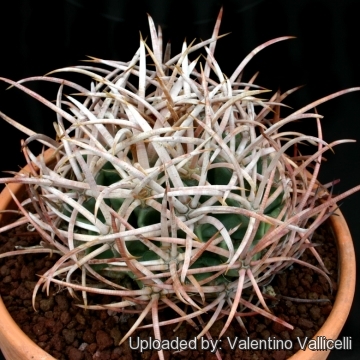 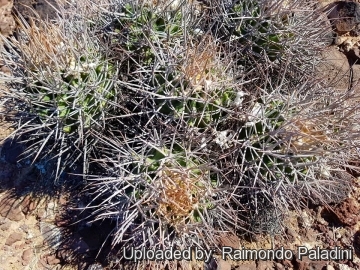 by Valentino Vallicelli
There are a total of 21 Photos.
Click here to view them all!
Cite this page: "Echinocactus polycephalus" Text available under a CC-BY-SA Creative Commons Attribution License. www.llifle.com 14 Nov. 2005. 28 Jan 2023. </Encyclopedia/CACTI/Family/Cactaceae/940/Echinocactus_polycephalus>