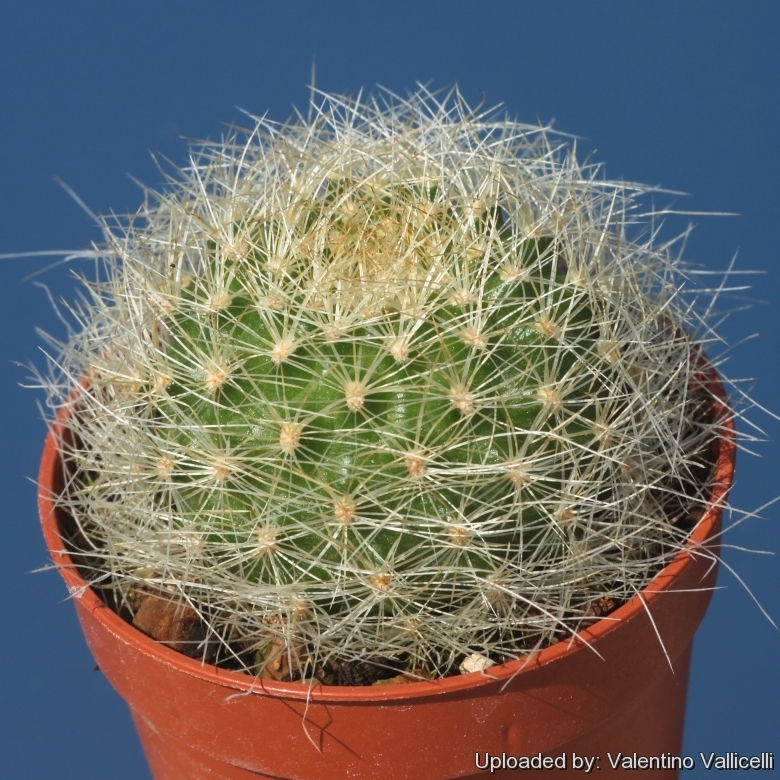 Description: Matucana crinifera is a globe-shaped cactus densely covered by yellowish-white, hair-like spines and showy blossoms, white at the bottom red on top. This taxon is referred by most authors as one of the several forms of the polymorphic Matucana haynei. However some other authors disagree and place this plant in Matucana comacephala (Matucana haynei subs. myriacantha). It is mostly single but occasionally many-stemmed with age.
Stem: Globular to cylindrical, 7-10 cm in diameter, up to 30 cm high, green, densely covered and almost invisible under the numerous spines.
Ribs: Up to 26, strongly tuberculate up to 6 mm hight.
Areoles: Set closely together, light brown, about 5 mm long and 3-5 mm wide 3 to 5 mm apart with an abundance of wool when young, but without any when old.
Radial spines: 15 to 25 setaceous up to5 cm long, white to yellowish or even brown or blackish.
Flowers: 5 to 7 cm long, tubular and slightly zygomorphic, yellowish orange, red to crimson or magenta at the end of the petals and white below. Floral tube 3-4 cm long and 5 mm thick. Filaments basally white and reddish toward the tips. The style is orange to golden yellow , with 5 pale green to golden yellow stigma lobes.
Fruits: Spherical, about 8 mm in diameter, greenish-brown when ripe.
Seeds: 1,2 mm wide, dark and rough textured.