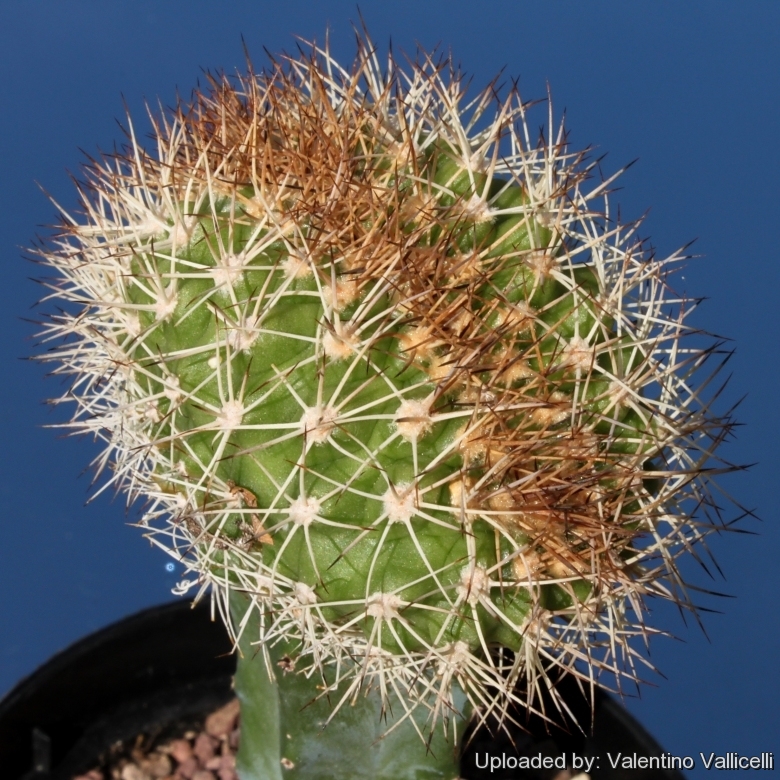 Description: The standard Matucana crinifera is a globe-shaped cactus densely covered by yellowish-white, hair-like spines and showy blossoms, white at the bottom red on top. The crest form (Matucana crinifera f. cristata)- despite to its beauty - is still very rare and sought after by collectors, for it display of colours.
Stem: Fan-shaped, 7-10 cm thick, up to 30 cm high, green, densely covered and almost invisible under the numerous spines.
Ribs: Strongly tuberculate up to 6 mm hight.
Areoles: Set closely together, light brown, about 5 mm long and 3-5 mm wide 3 to 5 mm apart with an abundance of wool when young, but without any when old.
Radial spines: 15 to 25 setaceous up to 5 cm long, white to yellowish or even brown or blackish.
Flowers: 5 to 7 cm long, tubular and slightly zygomorphic, yellowish orange, red to crimson or magenta at the end of the petals and white below. Floral tube 3-4 cm long and 5 mm thick. Filaments basally white and reddish toward the tips. The style is orange to golden yellow , with 5 pale green to golden yellow stigma lobes.
Fruits: Spherical, about 8 mm in diameter, greenish-brown when ripe.
Seeds: 1,2 mm wide, dark and rough textured.