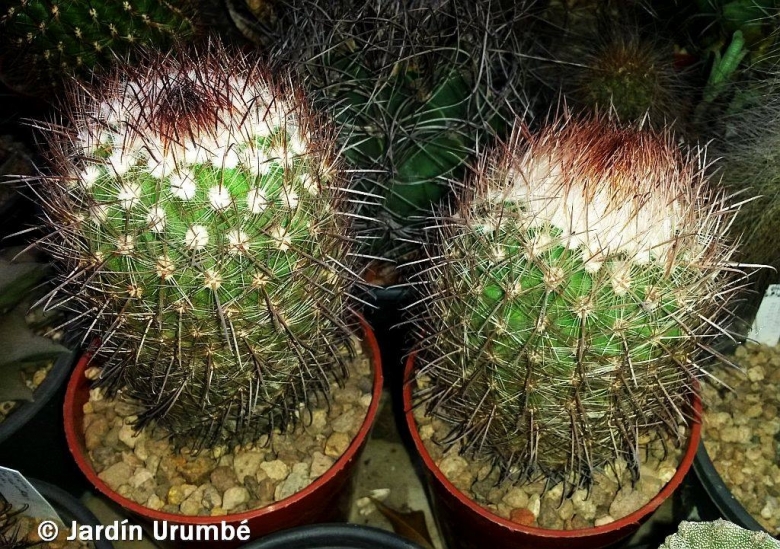 Origin and Habitat: Parodia stuemeri is common in the Argentinian province of Salta and Jujuy.
Altitude range: This species grows at altitudes of 2300 to 3100 meters.
Habitat and Ecology: This species grows in prepuna, in riparian vegetation on light clayish soil among rocks debris strewn around and on cliffs. The plants are often covered in grey dust which made it hard to spot and grow together with Parodia nivosa, Pyrrhocactus umadeave, Gymnocalycium spegazzinii, Gymnocalycium horizonthalonium, Rebutia minuscula, Lobivia haematantha, Trichocereus atacamensis and various Opuntia spp. Apart from the cacti, there are only lichens, mosses, poor thin scrub and clumps of Abromietiella breviflora. Although Parodia stuemeri has a relatively restricted range, the population seems to be stable and not subject to any major threat.

Description: Parodia stuemeri firstly described as Echinocactus stuemeri by Erich Werdermann in 1931, is a distinct solitary species that at times may form small or huge clumps. However the plant occurs in several places, and is quite variable both in habitat and in our collections too. The spines range from dusky-yellow to nearly black, and flowers may be yellowish, orange or reddish, to 4 cm long .
Stem: Globular to cylindrical up to 20 cm tall and 15 cm in diameter, dull green. Apex with whitish or brownish felt.
Ribs: Approx. 20 or more, vertical or slightly coiling, flattened, tuberculate. Tubercles conical.
Areoles: White, woolly in youth.
Central spines: 4 up to 25 mm long, rigid, stiff, needle-like, terete to slightly curved, thick below, white-grey to dusky-yellow to copper red, to dark brown to violet-grey to black (usually darker at apex), becoming grey with age. Some of them occasionally show a more or less curved tip.
Radial spines: Up to 25 thinner, needle-like, whitish but darker basally, interlacing, 10 to 1.15 mm (rarely to 20 mm) long.
Flowers: 3-4 cm long and broad, campanulate to funnel-shaped, yellowish
orange or reddish, pericarpels and floral tubes with white wool.
Blooming season: This species is one of the last Parodias to flower each year - sometimes as late as late summer or early autumn.