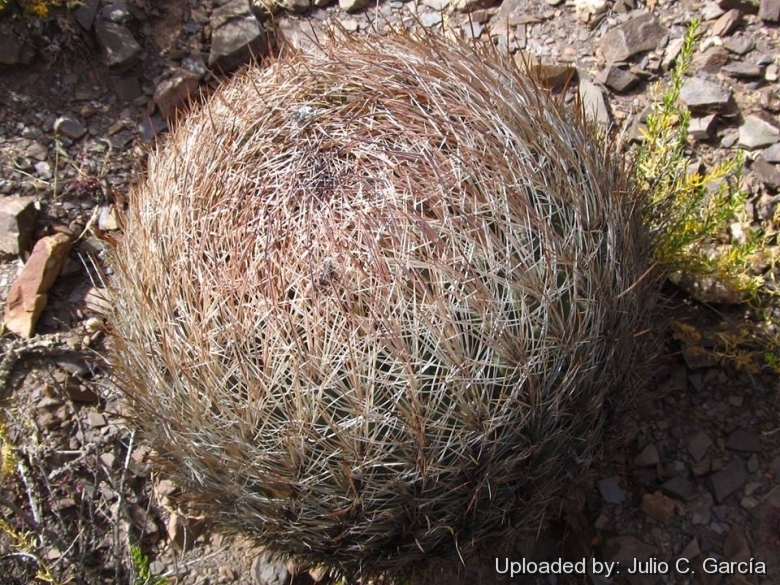 Origin and Habitat: Eriosyce umadeave has a restricted range in northwestern Argentina (Jujuy and western Salta in the Andes) and its known from two locations(extent of occurrence of approximately 1,300 km2).
Altitudes: From 2500 to 3900 meters above sea level.
Habitat: It thrives in extremely xerophytic, almost rainless, desert region and is only watered by the heavy dews and occasional showers which fall at certain seasons. It grows in alluvial slopes on perfectly dry sandy or rocky soils almost without any other visible vegetation except few cactus specie like Gymnocalycium spegazzinii, Tephrocactus glomeratus and Puna subterranea. The dens cover of spines protect the plant from frost because in winter time it get easily -20 degrees C. This cactus is present at high elevations and its population is declining. The main threat is the extraction of wild specimens to use them as ornamentals.

Description: Eriosyce umadeave is an attractive globular cactus species from the rainless desert region of the Northern Argentina. It is one of the rarer and more interesting Eriosyce sought after by impassioned cactus growers, but difficult to keep alive in cultivation.
Stem: Globular that eventually becomes shortly columnar, pale to dark-green, 10 to 20 in diameter and up to 40 cm tall. Apex bare without wool or felt.
Roots: Thin fibrous.
Ribs: 18 to 21 (rarely more) divided into deep tubercles.
Areoles: Long and narrow.
Spines: 20-35 or more, to 45 mm long, not easily recognized as centrals and radials, curved upward, white, cream, orangish, brownish-red to violet. This Eriosyce is very peculiar because the spines move considerably. In the dry season the spines are as close as possible to the body of the cactus (it is not possible to see any green of the body) while when it had some rain the spines open in such a way that it is possible to see the body and to count the ribs. This all happens in a time-frame of less than 2 weeks.
Flowers: Funnel-shaped, pale yellow, from old areoles 3 to 3,5 cm in diameter. Their pericarpel and the perianth tube, filled with some wool and bristles.
Fruit: Long, light-brown, 3-4 cm long, drying rigid when mature . 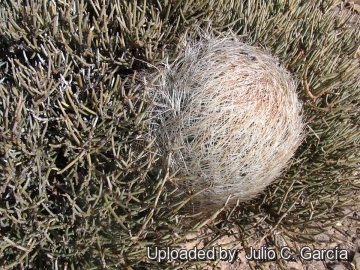 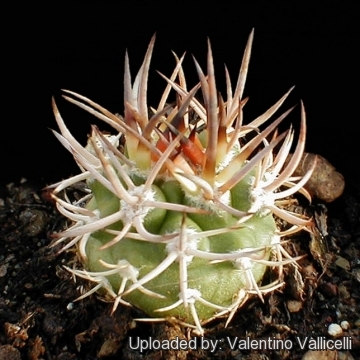 Cultivation and Propagation: Eriosyce umadeave is extremely xerophytic and adapted to very dry soils. This plant, along with other tricky cacti like Echinocactus polycephalus, is very difficult to grow, because its roots are particularly rot sensitive, especially after planting. Its culture is usually reserved only to the “impossible spiny growers” but often defies any growers attempts to cultivate it successfully. It is really a challenge to grow it into a large mature specimen, but plant grafted are relatively easy to grow and no special skill is required.
Growth rate: Slow-growing and very long-lived. This cactus continues to be, a particular prize among collectors.
Soils: It likes very porous mineral cactus mix soil, but can become too elongated if compost is too rich.
Repotting: This plant needs plenty of space for its roots, repotting should be done every other year or when the it has outgrown its pot. Use pot with good drainage.
Watering: Needs moderate in summer, but do not overwater (extremely rot prone), keep dry in winter at a minimum temperature of 0°C.
Fertilization: Feed with a high potassium fertilizer in summer.
Hardiness: Reputedly resistant to frost if kept on the dry side prior to, and during, cold weather (hardy to -12 C ° C, or less for short periods), but for safe cultivation it is best to avoid freezing temperatures. It need a very good ventilation.
Exposition: The plant tolerates extremely bright situations. Blasting full sun encourages flowering and heavy spine production.
Pests & diseases: It may be attractive to a variety of insects, but plants in good condition should be nearly pest-free, particularly if they are grown in a mineral potting-mix, with good exposure and ventilation. Nonetheless, there are several pests to watch for:
- Red spiders: Red spiders may be effectively rubbed up by watering the plants from above.
- Mealy bugs: Mealy bugs occasionally develop aerial into the new growth among the wool with disfiguring results, but the worst types develop underground on the roots and are invisible except by their effects.
- Scales: Scales are rarely a problem.
- Rot: This species is not easy and accommodating, often suffer of cryptogamic diseases. The main problem with Argentinian pyrrhocacti is the scorching type disease on the apex. This disease seems to be worse on Eriosyce umadeave than the others species, it scorches just some plants, but it doesn't seem to be contagious. Takes a while but they can grow out of it. Root rot is a serious problem with pyrrhocacti if the plants are not watered and “aired” correctly. If they are not, fungicides won't help all that much.
Propagation: Seed or grafting. The seeds germinate with extreme difficulty and a low rate of success. Seedlings did not do well either, and some die each year.