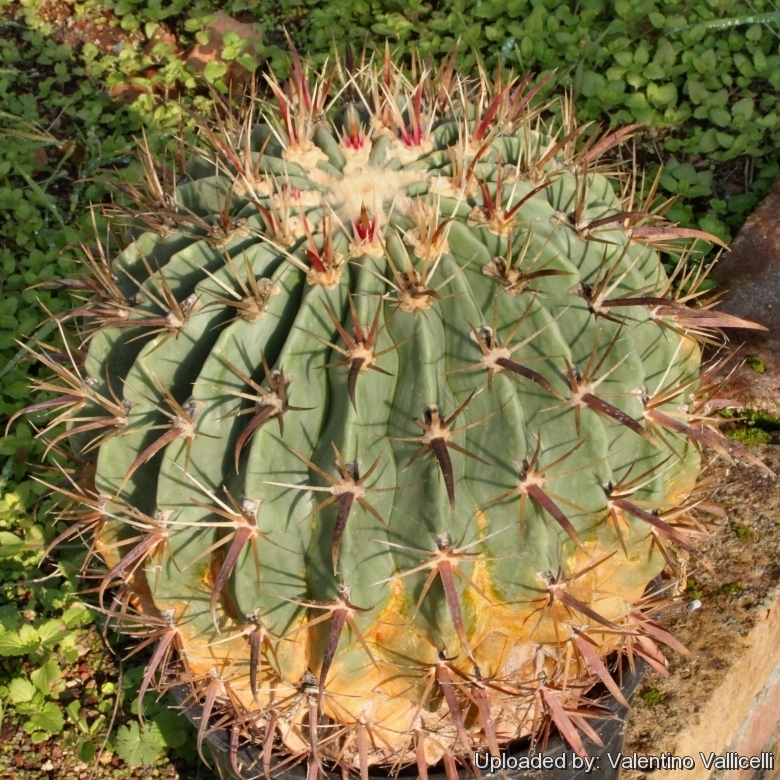 Origin and Habitat: Endemic to southern Puebla and southern Oaxaca. Mexico
Habitat: Ferocactus latispinus subsp. spiralis is common in the semiarid regions of Central Mexico in grasslands or on rocky hillsides. The range of this species is south of that of the standard Ferocactus latispinus. It is armed with big spines and a waxy cuticle against both vertebrate and insect herbivores. Only the flower is susceptible to predation. It grows in association with other plant species, including Mammillaria carnea, Coryphantha elephantidens, Coryphantha calipensis, Stenocereus stellatus, Stenocereus beneckei, Stenocereus pruinosus, Stenocereus marginatus, Stenocereus treleasei, Stenocereus dumortieri, Myrtillocactus geometrizans, Pachycereus weberi, Polaskia chichipe, Escontria chiotilla, Opuntia decumbens, Opuntia pumila, Agave lophantha, Agave macroacantha and Tillandsia pueblensis.

Description: Ferocactus latispinus subsp. spiralis (formerly known as Ferocactus recurvus or sometimes as Ferocactus nobilis) is a modest-sized, winter blooming barrel cactus that is distinguishable from the standard Ferocactus latispinus for the more elongate to cylindrical stem, fewer and stouter radial spines and only one longer central spine.
Habit: It is a perennial stem succulent, which normally remains a solitary plant, without dividing or producing offsets.
Stem: Light green to blue-green, larger, upright, spherical to shortly cylindrical, 25 to 45 cm in diameter, 25-50 cm tall, most often taller than wide and exceptionally up to 100 cm tall.
Ribs: 13 to 23 ribs (but usually 15-21), sharp and prominent vertical or and twisting as it grows, hence its epithet.
Note: Juvenile Ferocactus latispinus subsp. spiralis shows a tuberculate structure, but as it approaches maturity will change to a ribbed formation.
Areoles: Large with grey to blackish felt atop bumps along the ribs.
Radial spines: 5-7 up to 2,5 cm long, stouter than in the standard species, straight, widely spreading out, annulate white, yellow, pink or reddish. Lacking the more delicate spider-like lateral spines of Ferocactus latispinus.
Central spines: One large, broad, flat and recurved at the tip, up to 7 cm long and 4-9 mm broad. This prominent spine is usually red, brownish-red or grey-red, but may be amber-coloured.
Flowers: Campanulate, very pale pink with darker purple midveins and a deep almost maroon-pink throat and fragrant up to 2,5-4 cm long and about 3 cm broad. Perianth segments narrow, acute. Scales on the ovary ovate and closely imbricated. Scales on flower tube similar similar to those on the ovary but longer.
Blooming time: Late autumn to early winter, usually in October, but it usually flowers only if the weather is warm and sunny ( need a fair amount of bright sunlight to form) This subspecies starts blooming only when reaches a diameter of about 20 cm, while Ferocactus latispinus starts blooming at a smaller size.
Fruit: Oblong about 2 or more cm long, 1,2 mm in diameter, clothed in tapering scales.
Seeds: Dark-brown, reniform, slightly pitted, 1,2-1,5 mm long.

Cultivation and Propagation: Ferocactus latispinus ssp. spiralis (syn. Ferocactus recurvus) is a relatively easy species. Slow growing to start but does well under cultivation.
Growth rate: Slow growing to start but does well under cultivation.
Soil: Grow it in a rich and particularly draining substratum, as it is very sensitive to rottenness when in presence of humidity and low temperatures and let the soil dry out between waterings.
Repotting: Repot in the spring, when their roots become cramped. Generally, they should be repotted every other year in order to provide fresh soil. After repotting, do not water for a week or more. Use pot with good drainage.
Fertilization: It grows much faster with a low nitrogen content fertilizer in spring and summer.
Watering: Water during the aestival growth cycle from March till October, the thin, fibrous roots suffer if there is humidity, therefore the plant should be watered only when the surrounding terrain is dry. But needs to be avoided wetting the bodies of these plants while they are in sunlight. A wet cactus in the sun light can cause sun burning which can lead to scares or even fungal infections and death. Keep dry as soon as the temperature starts dropping in October and keep it perfectly dry in winter at temperatures from 5 to 15 degrees centigrade. Preferable not to water on overcast days, humid days or cold winter days.
Hardiness: They need to be kept in a cool place during winter rest and can tolerate sporadic light frost if kept on the dry side prior to, and during, cold weather with little danger of being killed. However in cultivation it is better not to expose it to temperatures lower than 5° C, even if in an aerated and protected location. It tends to rot in winter during the resting phase, if kept wet. In the rest period no high atmospheric humidity!! Outdoors this plant is very adaptable, as long as you avoid excessive humidity in the winter months.
Sun Exposure: It need full sun exposures with ample airflow for best appearance.
Uses: The "Candy cactus" is used to make sweets. The middle is cored out and soaked in sugar, then chopped up and eaten.
Warning: The spines that hook around can graph you if you get too close.
Pests & diseases: It may be attractive to a variety of insects, but plants in good condition should be nearly pest-free, particularly if they are grown in a mineral potting-mix, with good exposure and ventilation. Nonetheless, there are several pests to watch for:
- Red spiders: Red spiders may be effectively rubbed up by watering the infested plants from above.
- Mealy bugs: Mealy bugs occasionally develop aerial into the new growth among the wool with disfiguring results, but the worst types develop underground on the roots and are invisible except by their effects.
- Scales: Scales are rarely a problem.
- Rot: Rot is only a minor problem with cacti if the plants are watered and “aired” correctly. If they are not, fungicides won't help all that much. To prevent rottenness it is also advisable to surround its root neck by very rough sand or grit, this help a fast water drainage.
Propagation: Almost exclusively by seed. The seeds can be sown in pots of fine, well-drained sandy soil, any time during the spring when temperatures are warm. The seedlings should not be disturbed until they are well rooted after which they can be planted separately in small pots.