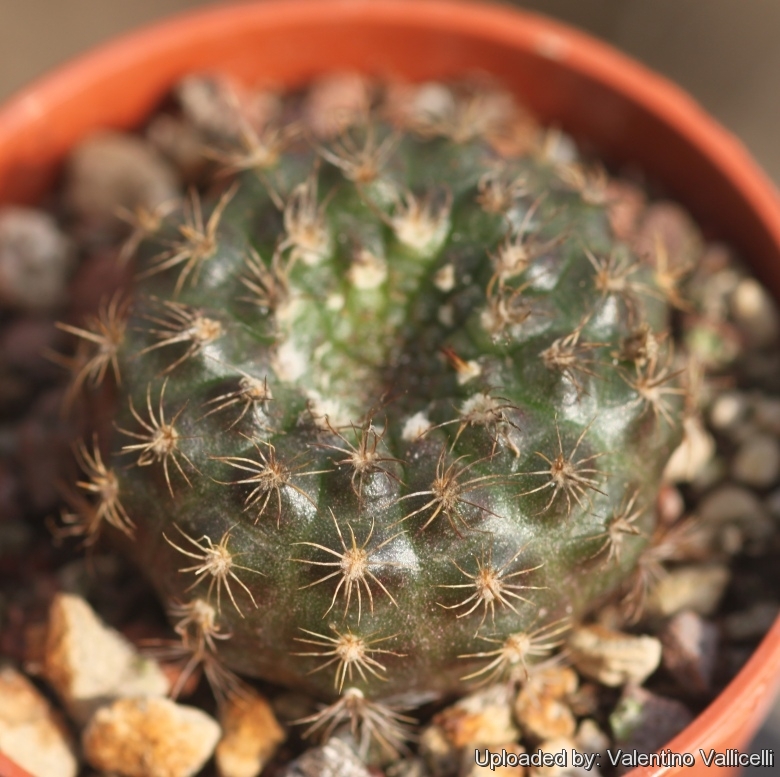 Description: Frailea ybatensis (Occasionally misspelled "ybatense") is one of the varieties of the wide ranging and variable Frailea schilinzkyana. It has less numerous spines, more numerous ribs, dark brownish-green or purple-violet stems, and citron yellow flowers opening in the afternoon. The differences with other Frailea schilinzkyana are in reality very minimal and most botanist agree on the fact that both should all be included in the Frailea schilinzkyana.
Habit: It is a small solitary (unless damaged) perennial stem succulent that grows deep seated flat to the ground surface.
Stem: Flattened-globular somewhat depressed at apex up to 4 cm in diameter and 2,5 cm high, green to dark-green.
Ribs: Up to 24 vertical or weakly spiralling with round tubercles about 6 mm apart. Usually red to purple-violet.
Areoles: Round covered with cream-white short wool.
Spines: Bristly, curved, up to 5 more or less pectinate or radially placed on both sides, one pointing downward, one (-2) upward and rarely one central spine, all the little ragged, creamy-white.
Flowers: Apical, diurnal, radial, funnel-shaped, 30 mm broad, yellow. Pericarpel about 8 mm long, 5 mm wide, below the naked, above whitish-brown hairs. Outer perianth segments spatulate, with a very sharp tip and pale green stripes, inner ones spatulate, acute, finely ciliate, pale-yellow. Style 10 mm long, pale-yellow; stigma lobes 5 mm long pale-yellow. Stamens pale-yellow in two rows, inner ones close to the style 9 mm long, outer rows 5-7 mm long. Anthers 1 mm long yellow. The flowers are often cleistogamous (Even when their flowers do not open, they still form fruits with many seeds).
Fruits: Globular, 7 mm in diameter, brown whit pale-brownish hairs.
Seeds: Boat shaped, dark brown, glossy 1,7-1,9 mm long, 1,2-1,4 mm wide.