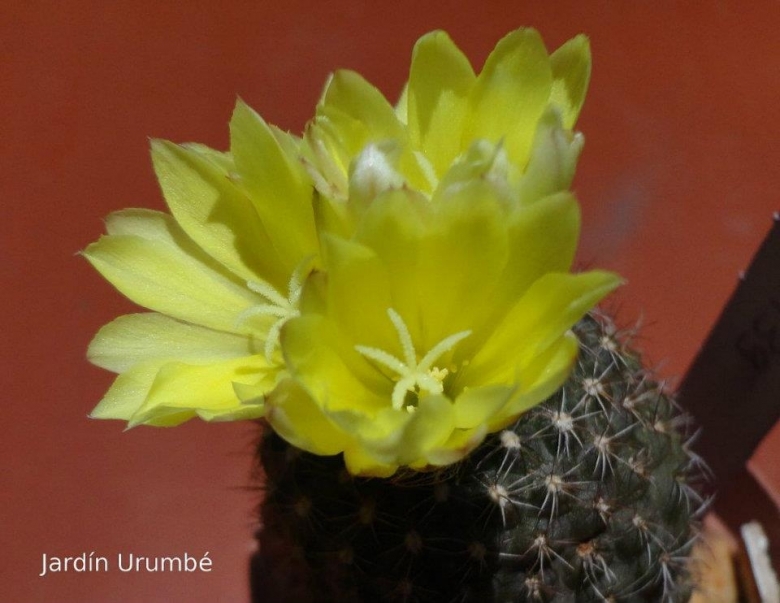 Origin and Habitat: Cordillera and Paraguarí (Piribebuy and adjacent areas with some intermediate form towards Rio Parana), Paraguay.

Description: Frailea friedrichii is a dwarf cactus with unique and remarkably beautiful shape, the stems are small and solitary (fairly rarely clustered), dark green to coppery red, to 3 (or more) cm in diameter. It is at most a race of Frailea schilinzkyana. The key difference by which Frailea friedrichii was separated, namely the presence of more ribs (17-20), that are vertical, and forming tubercles, seems entirely spurious, and appears to fall within the natural variation of Frailea schilinzkyana and it should be synonymized with the latter.
Derivation of specific name: This member of the Cactaceae family was given this name in honour of Adolfo Maria Friedrich (1897– 1987), German photographer emigrating 1925 to Brazil and settling 1930 in Paraguay.
Stems: Single, globular, to 3-8 cm high and 3-6 in diameter, dark green to coppery red.
Ribs: 17-20, vertical, forming round tubercles to 4 mm in diameter.
Areoles: Oval, 1.25 mm long, 0.50-0.75 mm wide, with some light brown felt, later glabrous, to 1.5 mm apart.
Spines: Thin, amber, reddish or horn-coloured; all spines to 3-4 mm long.
Central spines: As many as 2, often absent, erect, slightly curved.
Radial spines: As many as 15, somewhat spreading, often bent and pectinate(6-7 on each side).
Flowers: Funnelform, lemon yellow, relatively large to 2-2.5 mm long and wide. Pericarpel spherical, c. 4 mm in diameter, lowest part, the lowest part naked, with areoles above, each of them with 3-6 light, curved, stiff, brown bristles to 3 mm long and white hairs. Receptacle short, about 4 mm long, with scales and in their axes 1-2 flexible, brown to light brown bristles 4-12 mm long, and soft white hair. Scales 1 to 3 mm long. Outer perianth segments spatulate, tapering, ending in a short needle-like tip, 6 to 8 mm long, 1.5 to 2 mm wide, dull-yellow outer side dirty-green, darkening toward the top with whitish or grey outer margins. Inner perianth segments 14 mm long, 3.5 mm wide, finely ciliate, yellow, outer side yellow to light pink, otherwise like the outer segments. Style 8.5 mm long, 0.8 mm in diameter, with 8 yellowish-white stigma lobes, 2,5 mm long, studded with papillae. Primary stamens 4-9 mm long, erect yellowish-white. Secondary stamens 4 to 5 mm long, curved upwards towards the anthers yellowish. Anthers 0.7 mm long, yellow.
Fruits: 1-18 mm long, and 6-8 mm wide, with light brown bristles and grey woolly hairs. Pericarp (skin), when ripe, dry and thin.
Seeds: Cap shaped dull black,1.5 mm long and 1.2 mm wide. Testa with very fine flat tubercles and with a strong crest on the back.

Notes: Fraileas are cleistogamous meaning that their flowers produce seed without even opening. Without the need for pollination, hence the buds rarely reach full bloom and remain closed. They usually produce little round, dry fruits without flowering. It would be a mistake to believe that this is always the case: Frailea pumila, is able to produce flowers which open normally, but they will open only in great heat in the hottest, brightest, afternoon sun, if at all. 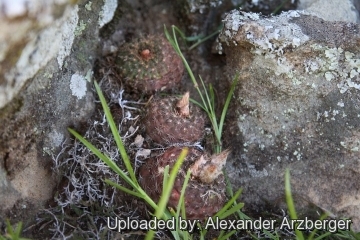 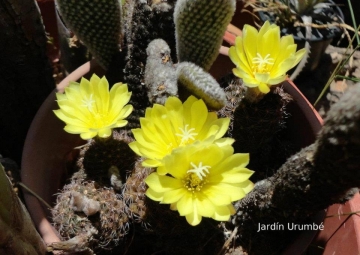 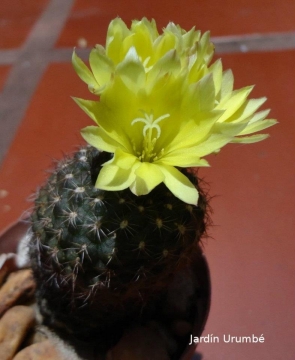