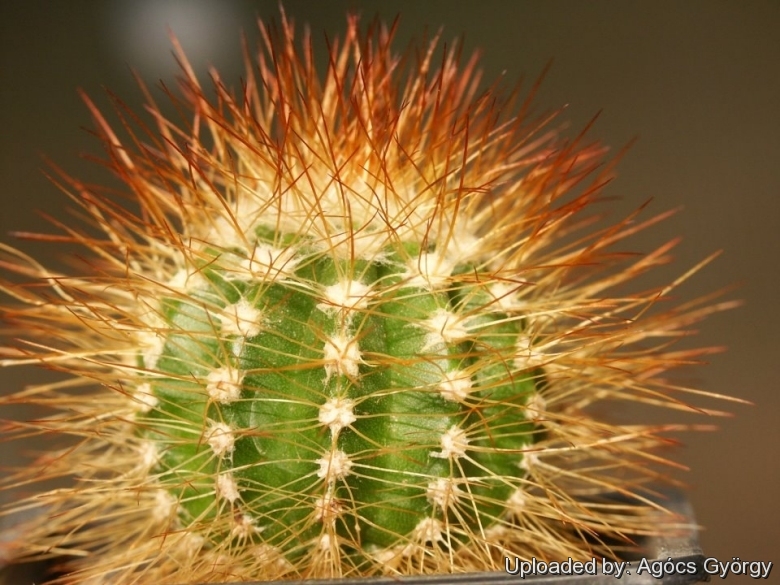 Origin and Habitat: Central Cuba. The only known population lives on this wall at Jibacoa.
Habitat and ecology: This melocactus grows on a very steep, nearly perpendicular and highly eroded rock wall, about 50 metres tall. The rock wall is extremely hot and dry for the survival of any plants other than Melocactus perezassoi.

Description: Melocactus harlowii subs. perezassoi (Melocactus perezassoi) has a vary restricted distribution and is distinguished from Melocactus harlowii by its more separated areoles, larger number of spines per areole, yellowish (instead of reddish) colour of young spines, weaker spines, special growth of the cephalium, larger flowers, rounded (rather than pointed) shape of the apex of the perianth segments, stigma not growing over the stamens, clavate (as against oval) fruit very pale pink (rather than red) at the apex, as well as larger seeds. Melocactus perezassoi is not accepted by many botanists that treat it as synonym, but it still has a value for a collector because they identify plants with particular characters.
Derivation of specific name: “perezassoi” For A. Pérez Asso of the Museo Nacional de Historia Natural, La Habana, Cuba, who first collected the taxon.
Stem: Solitary or occasionally branching, subglobose to ovoid, light to yellowish green, 11-16 cm high, 10-15 cm in diameter.
Ribs: 12-13, vertical, acute. Plants
Areoles: Elongate, sunken.
Spines: 17-24, slender, yellow to horn colored to brown.
Central spines: 3-5, spreading, straight or curved upward, 2-3 cm long.
Radial spines: 14-19, curved slightly upward, 0.5-2.5 cm long.
Cephalium: Hemispheric to cylindrical elongate, 4-9 cm high, 6-8 cm in diameter, with dense wool and salmon to orange-red bristles.
Flowers: Open in afternoon, exserted 6-8 mm above the cephalia, pale pink, 2.8-3.4 cm long, 1.2-1.5 cm in diameter.
Fruits: Club shaped, pale pink to white, 2.3-2.8 cm long, 6-8 mm in diameter. 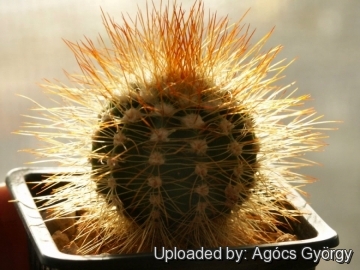 Illuminated from behind. Rebutialand cactus collection Demjén, Hungary. Photo by: Agócs György
Send a photo of this plant.

Cultivation and Propagation: Melocacti are not the easiest things to grow and aren’t plants for beginners. It grows from April to October, and can’t endure long stretches of total dryness, and also too much water will rot it, as its weak root systems tends to be inefficient at sucking up water from wet soil. Nonetheless, again as a result of their tropical origins, they need a fair amount of water, but allow the soil to dry quite a bit before watering again. Melocacti rests from in winter (in temperate climates) but can’t stand cold, or even fairly cool temperatures, so is indispensable to keep it above 8-12°C at all times, severe damage or death occurring at temperatures that the great majority of cacti wouldn’t mind in the least and prefer more frequent water in winter than other cacti, say once a month. Do not feed in winter.
The root system is weak and generally resents being repotted and can take a long time to re-establish. The soil mix should be very quick draining, prefers very bright light, not as much as the most arid growing cacti, but plenty nonetheless.
Propagation: By Seeds or (often) graft. Sow in February-march in a light, sandy, porous soil. Cover germinating tray with glass to prevent seed from drying out. Germination is most successful at a temperature of 18 to 22° C.