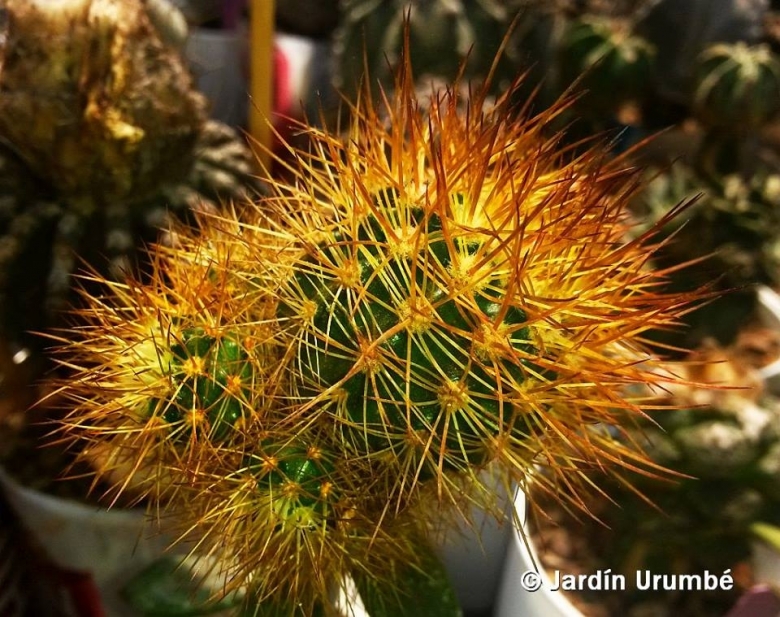 Origin and Habitat: Cuba, Oriente, Santiago de Cuba province, SW of Caimanera, on the western side of Guantánamo Bay. Area of occurrence 202.73 ha. There is a total 78 fragmented populations.
Altitude range: 20-180 metres above sea level.
Habitat and ecology: Melocactus evae forms large clumps of multi-headed fist-sized specimens growing in a very dry area on outcrops of conglomerate, with Ritterocereus hystrix and Pilosocereus sp. It is usually found on ridges and slopes at small elevations on parts of the habitat covered with gravel conglomerate and boulders, and never on the ground or among other vegetation. It grows in exposed areas and doesn't supports competition and association with other species. The soil is scarce, shallow and confined in small depressions that form a mosaic in the soil-less areas occupied by bare rock, layer of stones and boulders. The weather can be considered as a warm semi-desert with 9 to 10 dry months. Rainfalls varies between 461 and 580 mm per annum. During the dry period (November to April) rains less than 200 mm. Temperatures are high (annual average temperatures 26-28 ° C). The relative humidity is usually lower than 55% at noon, while is 85 to 90% at 7.00 o'clock in the morning. Because of all these factors, the evaporator ration is very high.

Description: Melocactus evae, is generally included within (as a synonym of) Melocactus harlowii (Britton & Rose) Vaupel. This species can pride itself with having the largest flowers in the harlowii-group (up to 2 cm), while its stem is perhaps one of the smallest among its closest relatives.
Derivation of specific name: This member of the Cactaceae family was given this name in honour of the wife of the author, Éva Visnyovszky, herself a microbiologist.
Stems: Columnar, thin, 15-20(-29) cm tall 6-8 cm in diameter.
Spines: Needle-like somewhat flexible. Central spines 2-4 20-25 mm long. Radial spines 10-15 about 10-15 mm long.
Cephalium: Cylindrical, slightly flattened 25-35 mm tall and 30-45 mm in diameter with thin, rigid, orange/red spines.
Flowers: Pink purple 7 to 9(-20) mm in diameter.