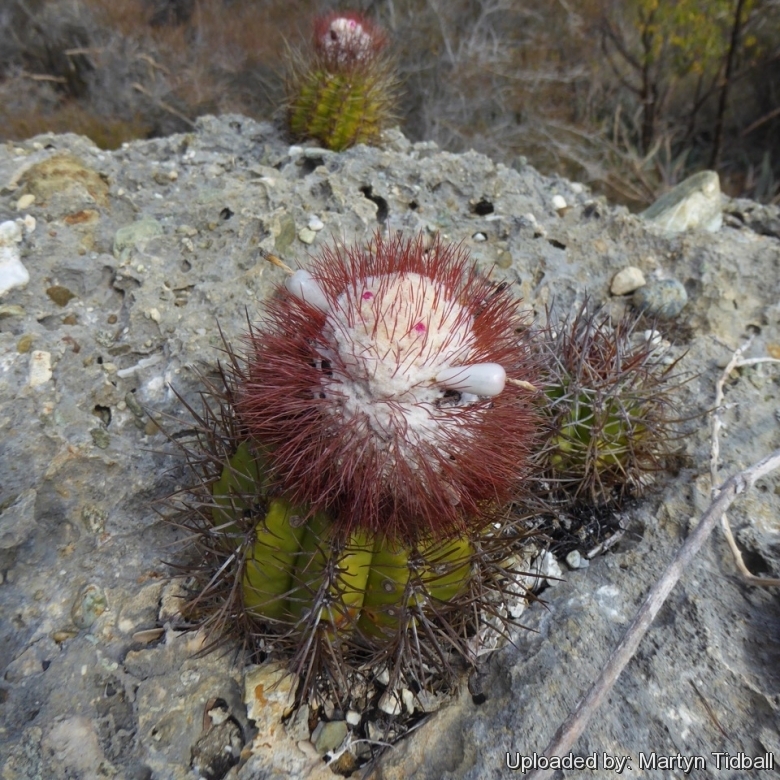 Origin and Habitat: Melocactus harlowii is is endemic to Cuba and common at the southeastern end of the island.
Type locality: Coastal cliffs, Guantanamo Bay, Oriente, Cuba.
Altitude range: This species occurs at elevations between sea level and 350 m asl.
Habitat and Ecology: This species occurs in coastal thickets and dry forests from La Mota in Granma to Boca del río Tacre in Guantánamo often on coastal and river cliffs but also on inland outcrops of serpentine or gravel conglomeration. The natural vegetation comprises the xerophylic palms of Coccothrinax hiearrane and Coccothrinax munizii, the shrub Calliandra colletioides, the century plant Agave albescens and several cacti such as Lamairocereus hystrix, Consolea acantha, Cylindropuntia hystrix, and also the small cactus, Mammillaria prolifera. Subpopulations for this species vary between a few individuals at some localities to thousands at other localities. Some subpopulations are declining or have been extirpated due to agriculture, urbanization, and fire.

Description: Melocactus harlowii is a Cuban species with bright green, ovate to cylindrical usually solitary stems that reach a heights of about 25 centimeters and a diameters of 10-20 cm. The spines initially reddish and become yellowish as they age, they are 3 to 4 cm long spines and can not be divided into central and radial spines. This species will yield a great amount of variability, a trait that makes the plant fascinating to the collector and worthless to the nurseryman since the offspring are sort of unpredictable. When they are mature, the body stops growing and produces a crown on its apex named cephalium. This densely spined area is where the flowers and fruit will be produced and grow 5 to 10 cm high and in diameter. The striking difference between the body and the cephalium, reminds of a cap, hence the name Turk's Cap Cacti given to many specimen in this genus.
Derivation of specific name: The specific name was given in honor of Captain Charles Henry Harlow, U. S. N., naval officer and Commandant of the Guantanamo Naval Station at the time Dr. Britton studied the flora of that reservation in 1909.
Stem: Ovoid to cylindrical, usually solitary, light green, to 25 cm high, 10-20 cm in diameter.
Ribs: 10-12.
Areoles: Closely set, usually less than 1 cm apart.
Spines: Not easily distinguishable as centrals and radials 10-40 mm long. Radial spines about 12, slightly spreading, reddish to yellowish with age, slender,. Central spines usually 4, similar to the radial, but usually a little stouter and longer.
Cephalia: 5-10 cm high and in diameter, with reddish bristles.
Flowers: Barely protruding from the cephalia, deep rose-red, 15-20 mm long, 10-25 mm in
diameter.
Fruits: Elongate, pink to deep red, to 20 mm long.
Seeds: Black, shining. 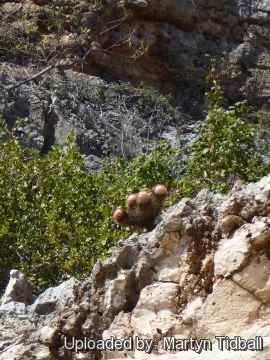 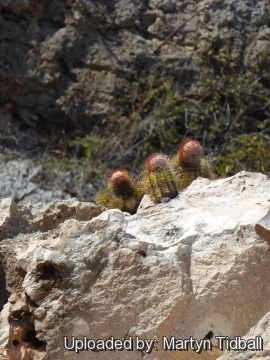 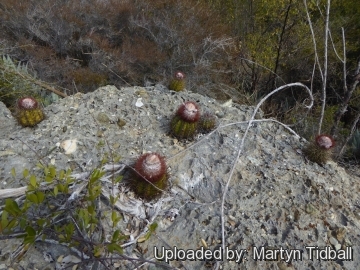 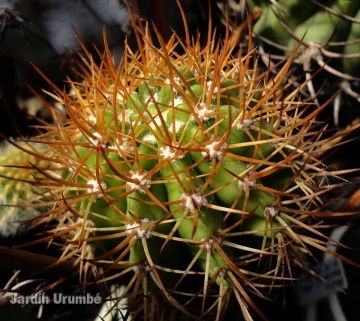 Cultivation and Propagation: These cacti are not the easiest things to grow and aren’t plants for beginners. Melocactus harlowii grows from April to October, it can’t endure long stretches of total dryness, and also too much water will rot it, as its weak root systems tends to be inefficient at sucking up water from wet soil. Nonetheless, again as a result of their tropical origins, they need a fair amount of water, but allow the soil to dry quite a bit before watering again.
Melocactus rests from October to April but can’t stand cold, or even fairly cool temperatures, so is indispensable to keep it above 8-12°C at all times, severe damage or death occurring at temperatures that the great majority of cacti wouldn’t mind in the least and prefer more frequent water in winter than other cacti, say once a month. Do not feed in winter.
The root system is weak and generally resents being repotted and can take a long time to re-establish. The soil mix should be very quick draining, prefers very bright light, not as much as the most arid growing cacti, but plenty nonetheless.
Propagation: Exclusively by Seeds. Sow in February-march in a light, sandy, porous soil. Cover germinating tray with glass to prevent seed from drying out. Germination is most successful at a temperature of 18 to 22° C.