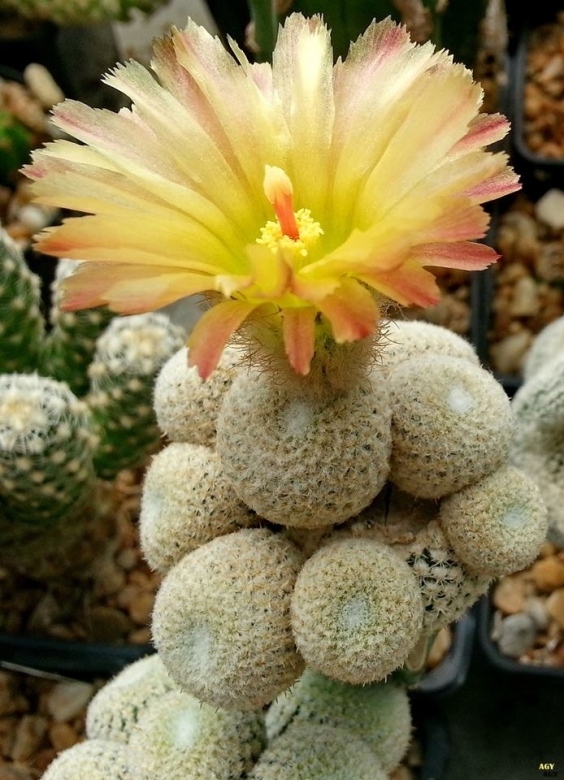 Origin and Habitat: Challe National Park (Southeast of Carrizal Bajo), IV Region, Chile
Altitude: They grow near the coast at about 165 to 290 metres of altitude.
Habitat: They are found in a small barren flat area on sandy soil with quartz gravel and stones with almost no other plants.
Ecology: The stems are partially or completely buried and invisible. It is only in wet years that these plants become visible as they absorb moisture and swell. The stems enlarge and bloom about 6-8 weeks after the rain. This only happens about twice a decade. Only few other succulents share the same habitat: Eulychnia acida, Eulychnia Philippi, Eriosyce odieri var. glabrescens and Copiapoa echinoides.

Description: Eriosyce napina ssp. challensis (Thelocephala) is a marvellous tiny cactus similar to Eriosyce napina var. lembckei but with larger tubers and (maybe) larger spines. It appears white due to its very woolly areoles and addpressed spines that make it looks like an hairy Epithelantha. It is believed to be one of the most beautiful Eriosyce.
Root: It has a very large fleshy but firm taproot up to 20 cm long and 20-30 mm in diameter and sometimes branched with few shallow roots near the crown.
Stem: Solitary or clustered, globose to elongated eventually becoming somewhat cylindrical in cultivation with a constriction between the stem and the root, 15-30 mm diameter, 40 mm high with a depressed woolly apex extending laterally.
Tubercles: Less than 1 mm high and very closely arranged in a double spiral pattern.
Areoles: Round, not depressed, 1 mm in diameter, younger ones with white wool at the apex
Radial spines: 11-14, about 1 mm long, pectinate, curved towards the body, cream coloured some smaller and orange becoming greys-white as they ages.
Central spines: None.
Flowers: 1 to 3 at stems apex, diurnal, funnel-shaped, 25-30 mm long and 20 mm in diameter. Tepals 15 mm long and 3-4 mm wide, pale yellow with a reddish midrib. Pericarpel entirely covered with brown wool. Style, reddish, 18- 20 mm long. Stigma, reddish with 7-10 lobes 3-4 mm long. Stamens 7-15 mm long with yellow anthers.
Blooming season: Late spring. It blooms already when young, synchronised flowering of the whole plants takes place over one or two days, and flowers remain open for about three or four days.
Fruit: Rounded to elongate 9-11 mm in diameter and 10-20 mm in length. Completely covered in white wool and silk, and the wool near the base is beige to white. It dehisces (splits open) by a basal pore.
Seed: 1 mm in diameter, dark brown. 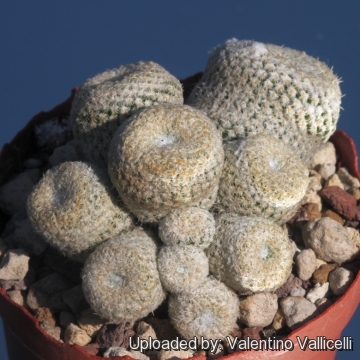 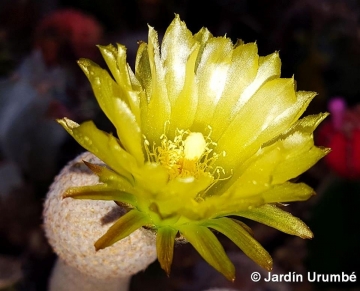 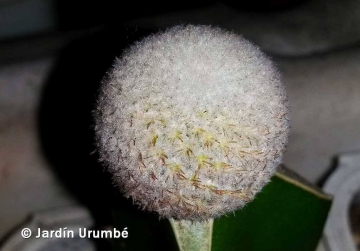 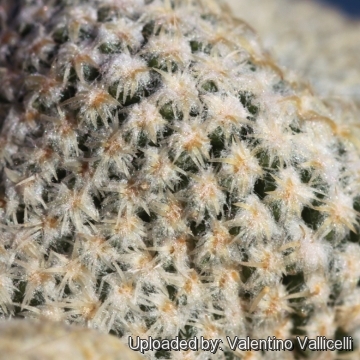 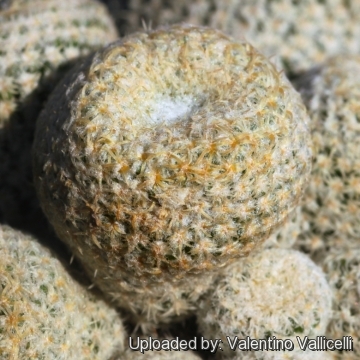