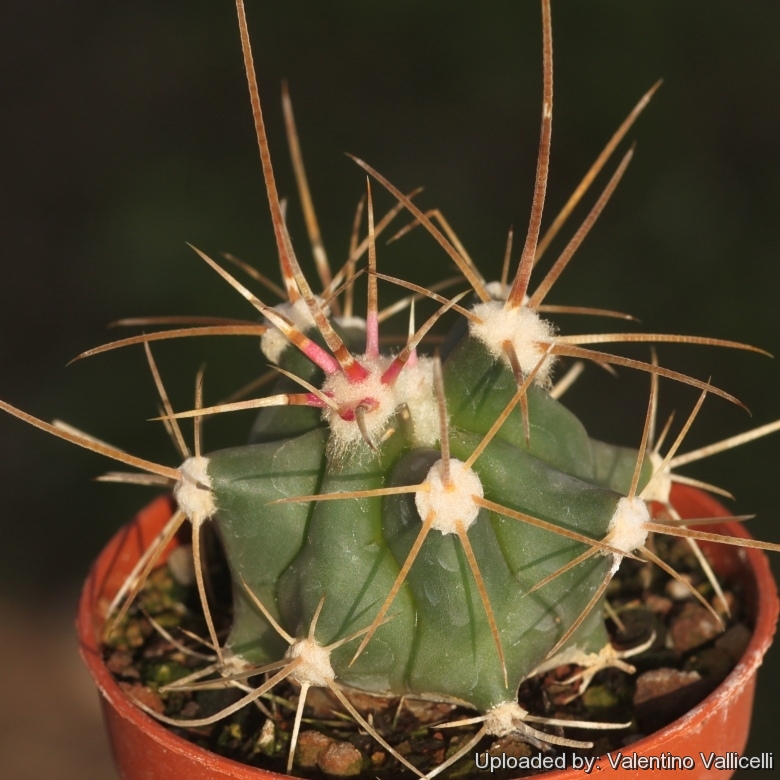 Description: x Ferobergia is a horticultural intergeneric hybrid, made by crossing one of the various species of Ferocactus (as a female) and Leuchtenbergia principis (as a male). This cross gives rise to odd plants with more or less long tubercles and spines. The length of the this tubercles and spines are the more variable of the trait and a great variety of forms can be found in cultivation. In turn, these Ferobergias, can be back-crossed with their Ferocatus parents, in order to achieve offspring with a genetic identity which is closer to that of the Ferocatus. The result are plants which look much more like a Ferocatus than a Leuchtenbergia principis.
Tubercles: Generally less long than in F1 ferobergias, often with a basal “chin”, and more or less arranged along ribs.
Areoles: The areoles are at the tips of tubercles. Some of this hybrids produce drops of nectar from areolar glands like Ferocactus.
Spines: Very variable, some plants have long, harmless, and papery spines, while other others have short and stout, eventually hooked spines (more similar to those of Ferocacti).
Flowers: Usually yellow, but also pink or magenta.
Blooming season: Blossoms intermittently from spring to fall.

Subspecies, varieties, forms and cultivars of plants belonging to the Ferobergia hybrids group 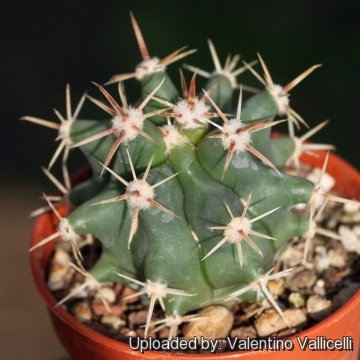 The gallery now contains thousands of pictures, however it is possible to do even more. We are, of course, seeking photos of species not yet shown in the gallery but not only that, we are also looking for better pictures than those already present. Read More...
Cite this page: "х Ferobergia sp. ( Ferobergia x Ferocactus backcross)" Text available under a CC-BY-SA Creative Commons Attribution License. www.llifle.com 14 Nov. 2005. 26 Sep 2021. </Encyclopedia/CACTI/Family/Cactaceae/25958/x_Ferobergia_sp._(_Ferobergia_x_Ferocactus_backcross)>