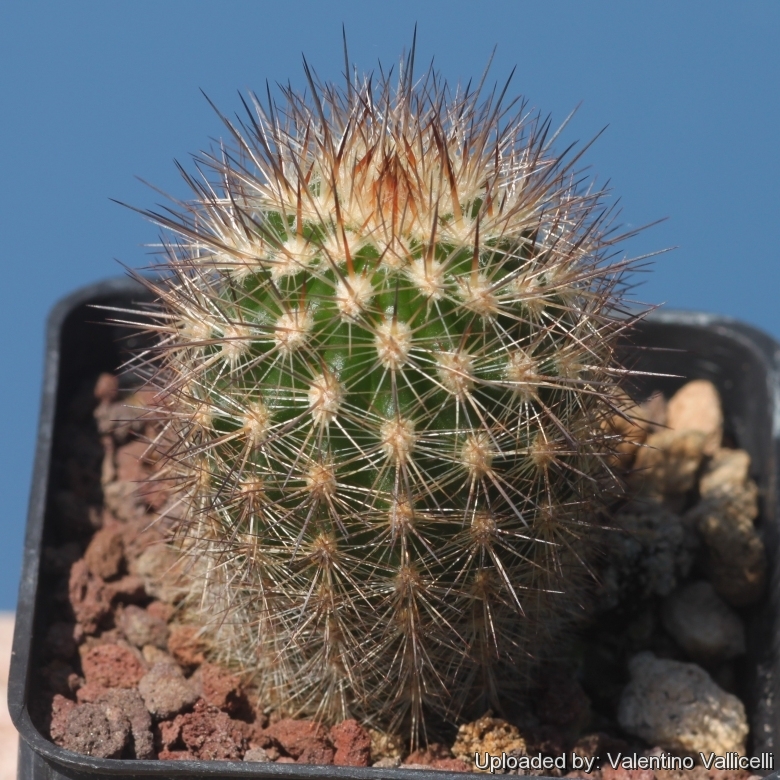 Origin and Habitat: Mountains of South Peru (Arequipa, Ayacucho)
Altitude range: 800-2500 metres above sea level.
Habit: The species grows in Andean shrubland on rocky and sandy soils where is locally abundant and frequent. At lower altitudes it is often found growing together with Weberbauerocereus weberbaueri.

Description: Arequipa spinosissima (Borzicactus hempelianus var. spinosissimus) is a local or morphological form of the widespread and variable Oreocereus hempelianus. It has more numerous spines (up to 10 centrals and up to 30 radials). More recent observations of the extent of variation in Oreocereus hempelianus populations has led many authors to conclude that the distinguishing characteristics of Arequipa spinosissima are not sufficiently distinct to deserve its own formal status. Arequipa spinosissima should be synonymized with O. hempelianus.
Habitat: It is a cylindrical cactus simple or clustering from base with age with dense short brown spines and bright purple/red flowers when mature.
Stem: Spherical at first becoming elongated and eventually short-cylindric with age, erect or decumbent up to 30-40 (rarely 60) cm tall, 10-15 cm across, usually greyish-green or glaucous green.
Ribs: 10-20 flattened and large, 5-15 mm distant.
Spines: Very variable yellow to reddish, becoming dull grey.
Central spines: (1-)3-6(-10), up to 5 cm often curved, whitish, brown or nearly black, flexible.
Radial spines: (8-)10-15(-30), 1-3 cm long, needle-like to finely bristle-like, diverging, yellowish to glassy white.
Flowers: Arising near apex, 5-7,5 cm long, 2,5-3,5 cm scross, scarlet to purplish red, tube slightly curved, open to one side, the scales densely and softly hairy in the axil, limb more or less oblique, the segments acute.
Fruit: Barrel shaped to ovoid about 1,5-2,5 cm in diameter, yellowish, thin-walled, opening basally.