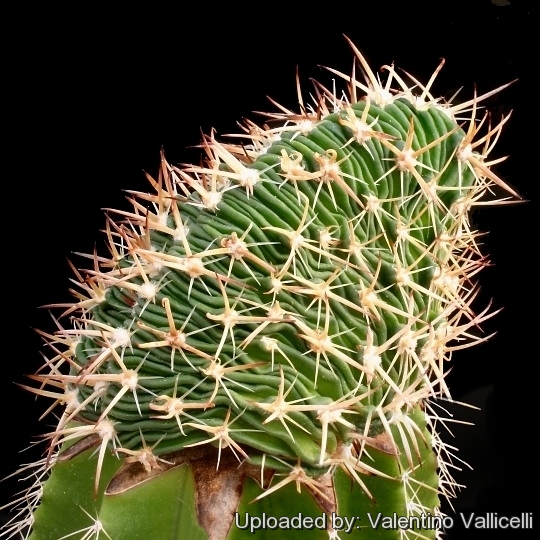 Description: The standard Stenocactus arrigensis (syn: Echinofossulocactus arrigensis) is a well known cactus with thin ribs with very undulated or curled ridges. The crested form (Stenocactus arrigensis f. cristata) - despite to its beauty - is still very rare and sought after by collectors, for its display of ferocious-looking spines with one very long central spine (up to 7-9 cm long) directed upwards. The plant found in cultivation under the name of Stenocactus arrigensis are quite variable and there are several crested clone too, and dissimilarity among different clones may be considerable.
Stem: Fan shaped, up to 20 cm tall, 5-10 cm thick, bluish-green, dark matt green or dark olive-green.
Ribs: Thin, more or less folded, very regularly and attractively waived, depressed in the region of areoles. The flattened, wavy or curled ridges of this species are characteristic of other kinds of Echinofossulocactus.
Areoles: 1 to 3 in each ribs, woolly in youth, later naked.
Radial spines: Usually 4 to 6 flattened, whitish to brownish, 0,5 to 1 cm long and about 0,6-1 mm wide at the base.
Central spine: 3-4 very flattened, whitish, yellowish, brownish to almost black, often darker at the tip, directed upwards ± rigid, ferocious-looking, straight or curved, unequal with one very long (from 1 to 10 cm long) and 1-5 mm wide at the base
Flowers: Central, rather small, up to 4 cm long, funnel-shaped. Perianth segments in two series, pale pink with a purplish midrib, oblong-linear, acute. Flower tube well developed, covered with imbricating scales.
Blooming season: Late spring to summer.
Fruits: 8-12 mm long, 4-6 mm wide, obovoid reddish to greysh, dry at maturity.
Seeds: 1 mm long x 0,9 mm wide, pyriform to reniform, black. Head with celled and wavy wall. 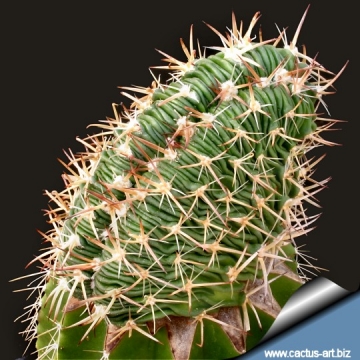