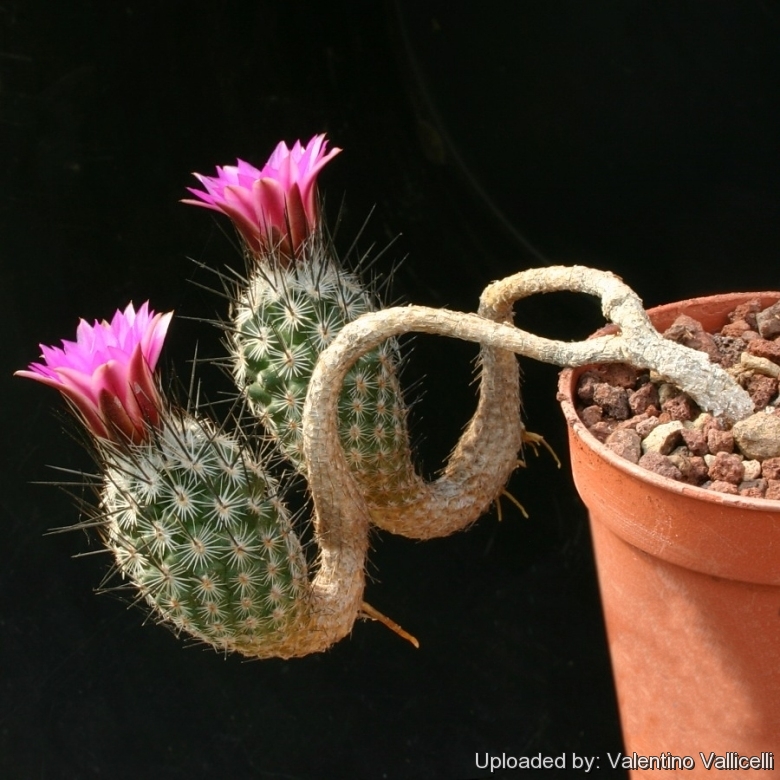 Echinocactus subterraneus (Turbinicarpus mandragora subs. subterraneus) Photo by: Valentino Vallicelli
is one of the most fascinating and unusual cacti. It has a tuberous root from which arises an extremely thin neck, ending in an enlarged top-shaped plant body, there is little chance of the thin neck support the stem vertically.

Origin and Habitat: It is a restricted micro-endemic species scattered in small populations in the municipalities of Aramberri, Doctor Arroyo and Mier y Noriega in the state of Nuevo Leon (Mexico)(extent of occurrence less than 5,000 km2)
Altitude: Around 1400-1700 metres above sea level.
Habitat and Ecology: This Turbinicarpus grows in low xerophytic shrubland on shallow slopes and in calcareous and gypsum soils together with Pelecyphora strobiliformis, Pelecyphora pseudopectinata v. rubriflora, Thelocactus hexaedrophorus, Ferocactus steinesii, Glandulicactus uncinatus, Coryphantha bergeriana, and Echinocereus pectinatus. It is endangered because it has a relatively restricted range, occurs in five locations, and it is sought after by collectors who cause a continuing decline in the population.

Subspecies, varieties, forms and cultivars of plants belonging to the Turbinicarpus mandragora group

Notes: The variety 'zaragozae' of this species (or perhaps an independent species) does not posess the thin 'neck'. 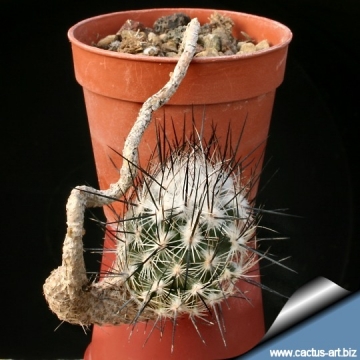 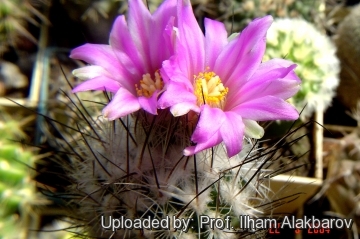 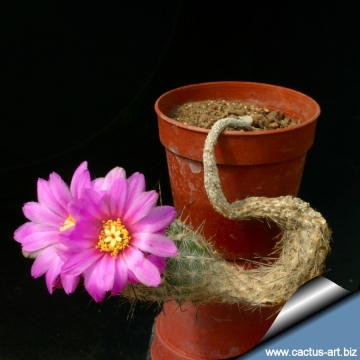 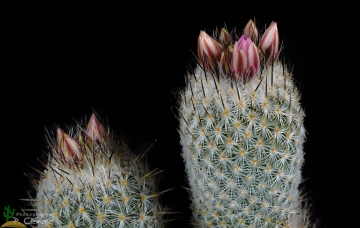 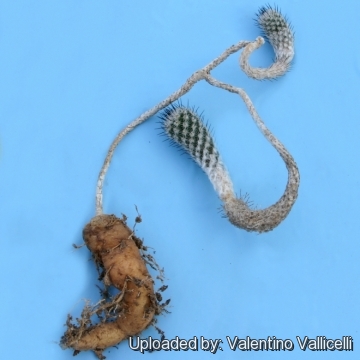 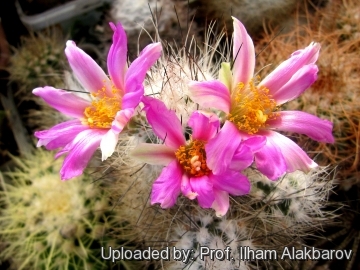 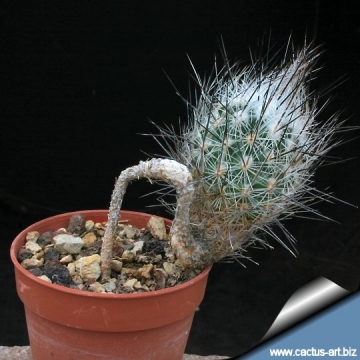 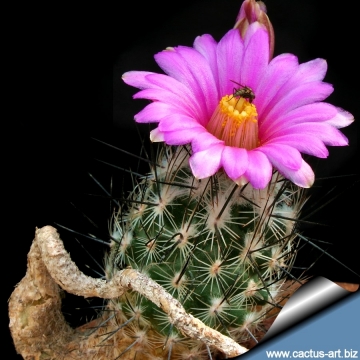 Cultivation and Propagation: It is a summer-growing species fairly easy and robust to cultivate, but very slow growing. This plant is xerophytic, adapted to dry soils and is quite susceptible to over-watering if kept in a non ventilated place.
Growth rate: Slow-growing.
Soil: Grow it in an open mineral, sandy-gritty cactus compost and provide a very good drainage.
Exposure: It is suited for sunny-brightly exposure, but can tolerate light shade. However it will do its best only with lots of sun and become stressed with inadequate light which could result in poor growth and unnatural shape. Direct sun is also beneficial in order to get a good spine growth. It has a good heat tolerance.
Watering: Waterings should be rather infrequent to keep the plant compact, and avoid its becoming excessively elongated and unnatural in appearance. Furthermore it has a tap root, and watering it properly is often difficult, because it tends to crack open or rot if over-watered. Keep dry in winter or when night temperatures remain below 10° C. Mature individuals easily rot and die especially after transplanting so be extremely cautious with watering. Water it less than average if in bigger pots.
Fertilization: Feed them once during the growing season with a fertilizer specifically formulated for cactus and succulents (high potash fertilizer with a dilute low nitrogen), including all micro nutrients and trace elements diluted to ½ the strength recommended on the label. They thrive in poor soils and need a limited supplies of fertilizer to avoid the plants developing excess vegetation, which is easily attacked by fungal diseases.
Special need: It is suited for airy exposures. Provide very good ventilation. Nearly all problems occur as a result of overwatering and poor ventilation, especially when weather conditions are dull and cool or very humid. They must have very dry atmosphere.
Hardiness: It likes warmth (recommended minimum winter temperature 5° C) But plants kept perfectly dry can easily survive a light frost.
Pests & diseases: These cacti may be attractive to a variety of insects, but plants in good condition should be nearly pest-free, particularly if they are grown in a mineral potting-mix, with good exposure and ventilation. Nonetheless, there are several pests to watch for:
- Red spiders: Red spiders may be effectively rubbed up by misting the plants from above.
- Mealy bugs: Mealy bugs occasionally develop aerial into the new leaves and flowers with disfiguring results, but the worst types develop underground on the roots and are invisible except by their effects.
- Scales, thrips and aphids: These insects are rarely a problem.
- Rot: Rot is only a minor problem if the plants are watered and “aired” correctly. If they are not, fungicides won't help all that much.
Reproduction: From seed, since the plant rarely produces plantlets, or grafted. The seeds can be sown in pots of fine, well-drained sandy soil, any time during the spring when temperatures are warm. Cover the seeds with a fine layer of grit and water from below with a fungicide to prevent damping off. For the 1-2 weeks cover the pots with a sheet of glass/clear perspex to keep the humidity levels high. Remove the glass and replace it with light shade-cloth and mist once or twice a day for the next two weeks after which most seeds should have germinated. From then on mistings can be reduced to every second and then every third day as the little plants grow. The seedlings should not be disturbed until they are well rooted after which they can be planted separately in small pots. Sometimes it is grafted to avoid root rot problems as plants grafted on an hardy stock are easy to grow and no special skill is required.