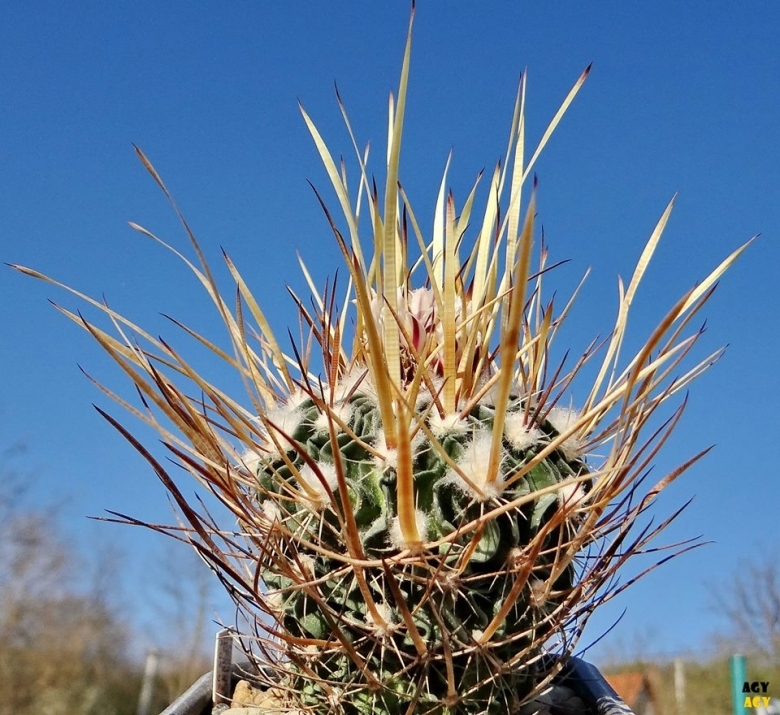 Description: Echinofossulocactus erectocentrus (Stenocactus) is a quite variable plant and the dissimilarity among seedlings spination and ribs shape may be considerable. According to Anderson, E. erectocentrus was not a validly published name,
nom.nud. (not a name at all although it keeps cropping up on labels), and he refers plants with this name under the Stenocactus multicostatus group-complex. However the two are easy to tell apart. S. multicostatus plants have short (no more than 3 cm) or very thin and flimsy spines, and the plants have few areoles and many ribs (as many as 120) where E. erectocentrus typically has 43 or fewer. On E. erectocentrus the long, flexible spines (to 13 cm) come up and close over the top of the plant. It produces whitish flowers with purple midvien in early spring.
Stems: Solitary, globose, vivid green with a flat tops 8-15cm wide and up to 7-12 cm tall, typically with less than 43, very tight, thin, wavy ribs
Areoles: There are only 2 or 3 areoles in each rib, witch are covered with white felt in young plants.
Spines: 6 to 9 radial spines, the upper ones are longer with a stout, flat, erected central spine sometime up to 13 cm long, while the lower ones are shorter and point downwards. The spines are different lengths.
Flowers: Flower buds are set in late fall and are held in the dense wool of the stem's apex, often with just the tips visible until mid-winter, when some sunny days come along and both the buds and plant start to grow. The plant will throw quite a few buds in early spring and open several 3 cm flowers at a time over the course of a month. If the conditions are right it can bloom again later in the year. And once flowering is complete the spines close up over the stem tip again. The blooms are white with a violet to purple midvien.
Echinofossulotattus erectocentrus SB116 Emilio Zapata, Nuevo Leon, Mexico: This form of E. erectocentrus has central spines that are all about 3 cm long, but still they want to close over the growing point of the plant.

Notes: The stenocati are commonly called wave or brain cacti because of their crinkly appearance. Because the undulating ribs on this small, spherical cactus are so numerous (and so closely spaced most of what you see is the wavy brain-like. 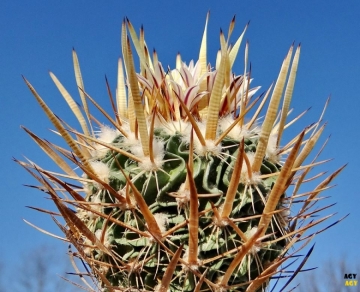 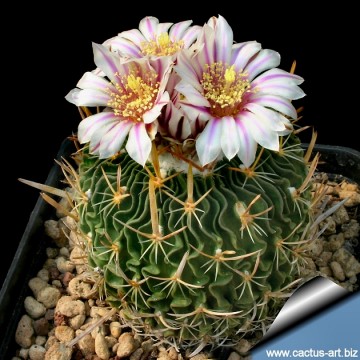 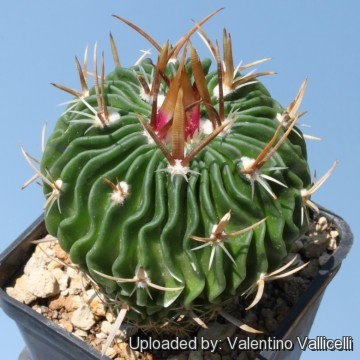 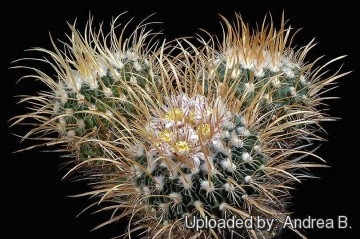 - The upper spines are very long whit a central stout and flat erected spine, while the lower ones are shorter and point downwards. The spines are different lengths. Photo by: Andrea B. 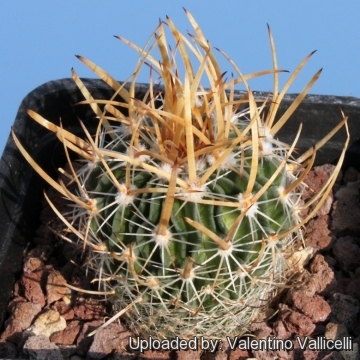 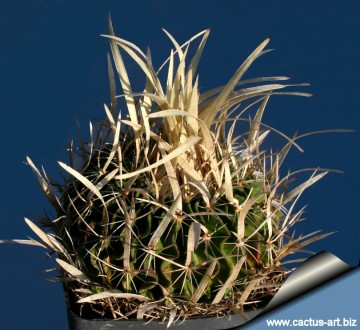 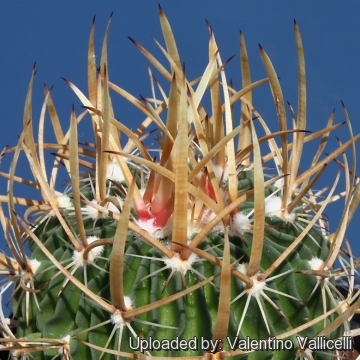 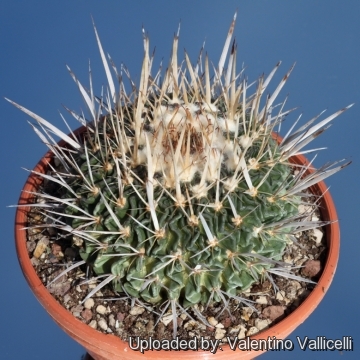 Cultivation and Propagation: Small growing and easy to to care and flower. Because of it’s small size makes a great potted plant specimen, great for beginning collectors.
Growth rate: It is a slow growing species.
Soil: It grows well in a very draining mineral potting substrate, but it isn't picky about soil.
Repotting: Use pot with good drainage.
Watering: During the summer it enjoys average watering, but do not overwater (It rots easily, especially if over wet) allow to dry between watering. Watering should be curtailed during the winter months..
Fertilization: Feed with a high potassium fertilizer in summer.
Hardiness: When dormant, the plant is very cold tolerant (down to nearly -5° C or less), but when left out it is more sensitive to frost.
Exposure: They do need a lot of light to develop their typical spination, but different clones vary in their tolerance of full sunshine. However some protection in light shade is recommended during the hottest hours in summer.
Uses: It is an excellent plant for container growing. It always looks good and stays small. It looks fine in a cold greenhouse and frame.
Rot: Rot it is only a minor problem with cacti if the plants are watered and “aired” correctly. If they are not, fungicides won't help all that much.
Propagation: Seeds (usually) or by the shoots of adult plants (if available). If you remove an offset, remember to let it dry for some days, letting the wound heal (cuttings planted too soon easily rot before they can grow roots). Lay it on the soil and insert the stem end partially into the substrate. Try to keep the cutting somewhat upright so that the roots are able to grow downward.