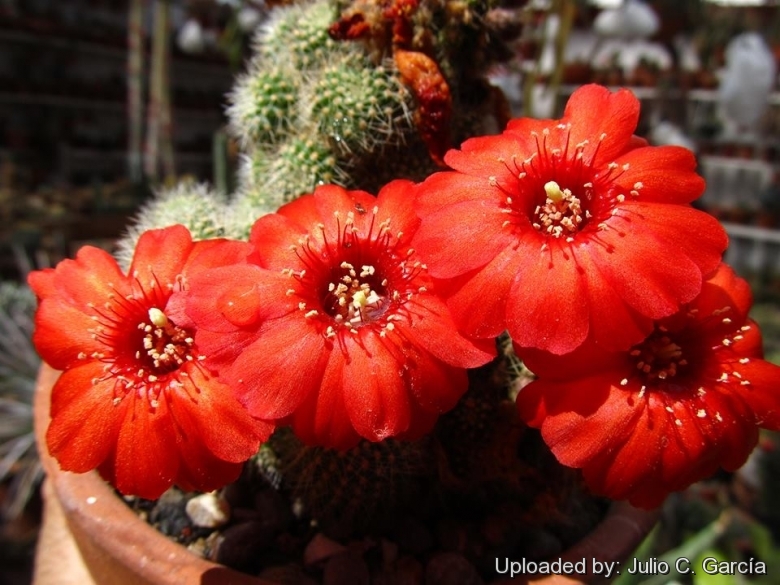 Description: Echinopsis saltensis (best known as: Lobivia saltensis) is a very interesting but variable species with several forms and variety.
Echinopsis saltensis var. multicostata: The var. multicostata Rausch is similar to the standard species, however with 20 and more ribs, closer spaced areoles and therefore also closer, broom-like Spination. In all other characteristics, namely shape of stems, flowers, fruits, roots etc. it is very similar to the standard E. saltensis.
Habit: It is a small cactus, usually solitary, or heavily clustering.
Stem: Flattish, egg-shaped or slightly elongated, up to 12 cm tall, 9 cm in diameter, bright green to dark green or almost black.
Areoles: 5-7 mm apart.
Ribs: 20 or more.
Roots: Tap root.
Radial spines: 12-14, thin, reddish.
Central spines: 1-4, whisker-like, twisted, asymmetrical, more or less long, interlaced up and in disorder curved up to 3 cm long. The length of spines greatly depends on sun exposure and plant's age.
Flowers: Pretty, shining, small up to 5 cm long, unscented, somewhat bell-shaped-bulgy, dark orange-red or crimson that appears almost black when starting to open. The stamen's filaments are dark red, and bear cream-white contrasting anthers. The stigma lobes are greenish.
Blooming season: The greater part of flowers appears in spring in the first flowering, but the plant can erratically produce some flowers in summer too.
Fruits: Globular, 5 mm in diameter, with little brown wool, up-drying.
Seeds: Globular, small grained. 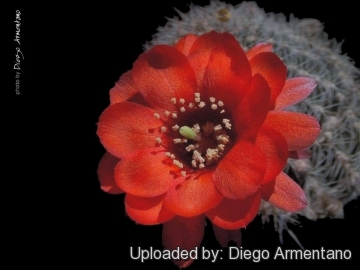 Cultivation and Propagation: Echinopsis saltensis var. multicostata is a a much decorative frost hardy cactus easily found in cultivation. It is a summer grower species that offers no cultivation difficulties.
Soil: Use a very a particularly draining substratum, as it is very sensitive to rottenness when in presence of humidity and low temperatures and let the soil dry out between waterings, since it's natural habitat is in volcanic soil, it has adapted to more acidic conditions.
Repotting: Repot in the spring, when their roots become cramped. Generally, they should be repotted every other year in order to provide fresh soil. After repotting, do not water for a week or more. Needs a large pot to accommodate a large root system.
Water: In summer, during the vegetative period, it must be regularly watered, but allowing the substratum to completely dry up before irrigating again (but do not overwater ); in winter, it’s to be kept dry. Preferable not to water on overcast days, humid days or cold winter days.
Hardiness: It is a quite frost resistant cactus, hardy to -5° C (- 10° C if very dry). However in cultivation it is better not to expose it to temperatures lower than -0° C, even if in an aerated and protected location, in order to avoid the formation of anti-aesthetic spots on the epidermis. In presence of high atmospheric humidity avoid any frost as it is particularly sensitive to root rot.
Exposure: Outside full sun or afternoon shade, inside needs bright light, and some direct sun, but, as a former mountain dweller, does not care for extremely high temperatures in summer.
Use: It is suitable for small “desert” gardens, in association with other xerophytes. Where the open air cultivation is not possible due to the climate, it is to be cultivated in pot in order to shelter it in winter.
Propagation: By seeds and by cuttings, provided left drying up well, in summer.