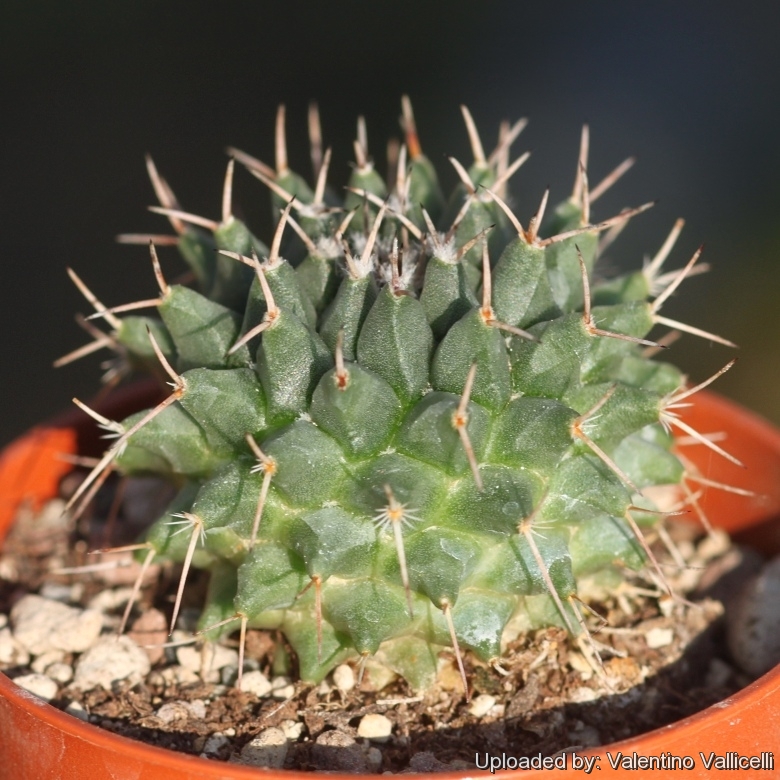 Origin and Habitat: Queretaro and Guanajuato (and may be in Hidalgo and San Luis Potosí), Mexico.
Altitude: 1900-2200 m.
Habitat and Ecology: This cactus grows under bushes in xerophytic shrubland, on hills and plains.

Description: Mammillaria formosa subs. pseudocrucigera, best known as Mammillaria pseudocrucigera is a controversial form of Mammillaria formosa which is intermediate and often synonymized with Mammillaria sempervivi. It has pink striped flowers and dense fine white horizontal radials spines and short stout chalky-white central spines more like the proper sempervivi.
Habit: Mostly solitary, or slowly clumping dichotomously flat with ground.
Stem: Symmetrically globose to depressed globose and not rising much above ground level, dull grey-green or olive gray-green, 5-20 cm high, 5-10 (or more) cm in diameter, and may, with age, become rubberized at its base.
Tubercles: Crowded, pyramidal, firm, arranged in numerous 13-21, very close-set spirals. The Axil is woolly with white wool especially in the floriferous portion.
Areoles: Oval and woolly when young.
Radial spines: Mostly hidden under white wool, usually on young stems only, 2 to 18, sometimes absent on mature areoles, white, bristle-like, to 1-3 mm long.
Central spines: 2 to 6, very short, stout, chalky-white to pale brown with darker tips, becoming grey with age, to 3-4(-8) mm long.
Flowers: Diurnal, funnel-form, in a rings on the crown barely rising above the tubercles, in the growth of the previous year, pinkish-white with a darker pink midstripe, 1-2 cm long and diameter.
Blooming season: Flowering period spring to summer.
Fruits: Club-shaped, attractively deep red coloured to 10 mm long.
Seed: Brown. 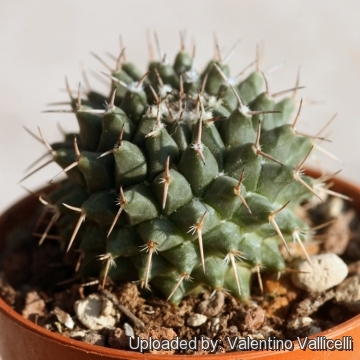