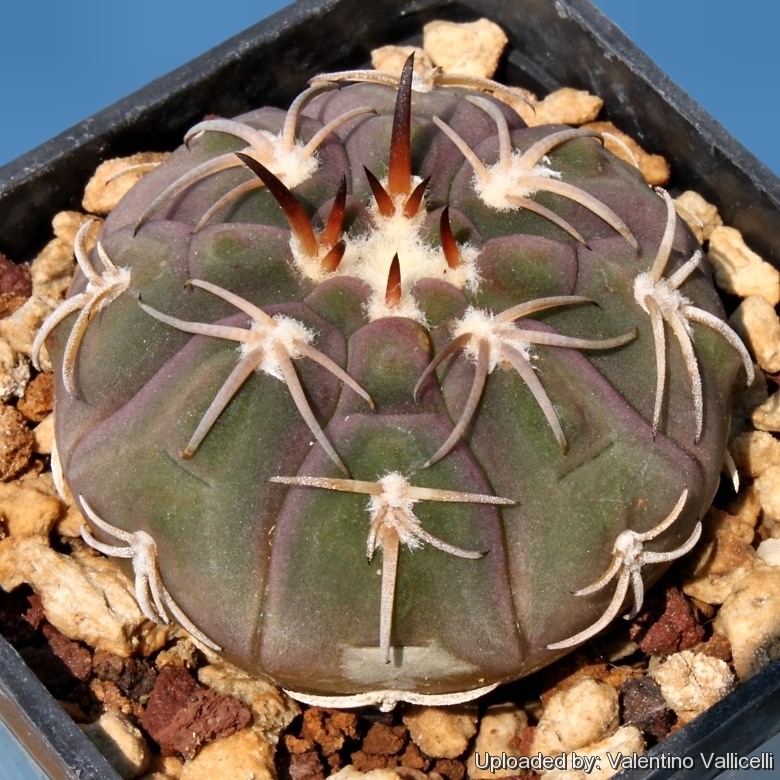 Description: Gymnocalycium spegazzinii var. horizonthalonium is a former synonym of Gymnocalycium spegazzinii which is characterized by a variability in the length and shape of the spines and has received many names. It is really difficult to tell var. horizonthalonium apart from the standard species and most authors choose to lump them together. It is not difficult to see how a naming error could have arisen here, leading to confusion with the not entirely dissimilar Echinocactus horizonthalonius.
Habit: Gymnocalycium spegazzinii is a geophyte cactus usually solitary and barely rising above ground level with a swollen root system.
Stem: Noticeably flatten, in nature it is partially underground, greyish-green, brownish-grey to almost black up to 18 cm (or more) in diameter, 6 cm tall (up to 10 cm tall in cultivation). Apex depressed an woolly. Will not offset.
Ribs: 10-33 (usually about 13-15) broad an low, evenly subdivided in confluent rounded tubercle, not chinned. Transversal grooves rudimentary or absent.
Areoles: Elongate 8-10 x 4-6 mm yellowish or greyish.
Central spine: Absent.
Radial spines: 5-7(-9) strong, subulate, +/- flattened, 25-55 mm long, typically recurved, and add-pressed against the body and most attractive, the young spines are yellowish or blackish and become brownish-grey as they ages.
Flowers: Infundibuliform on the plant apex 70 mm long, 50 mm in diameter. Outer tepals spatulated whitish or pinkish with a glaucous green midrib. Inner tepals smaller, lanceolated white with a pink midrib and basally crimson coloured (red throated). Filament crimson or violet, anthers pale-yellow, style white to violet-pink, stigma with 10-16 white to rose-coloured lobes. Scales on the ovary few and broad.
Blooming season: Flowers are produced in late spring and remain open for up to twelve days.
Fruits: Elongate up to 35 mm long, green covered with bluish pruine.
Seeds: Of the microsemineum type +/- 0.9 mm. 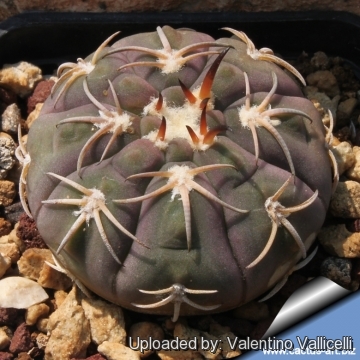