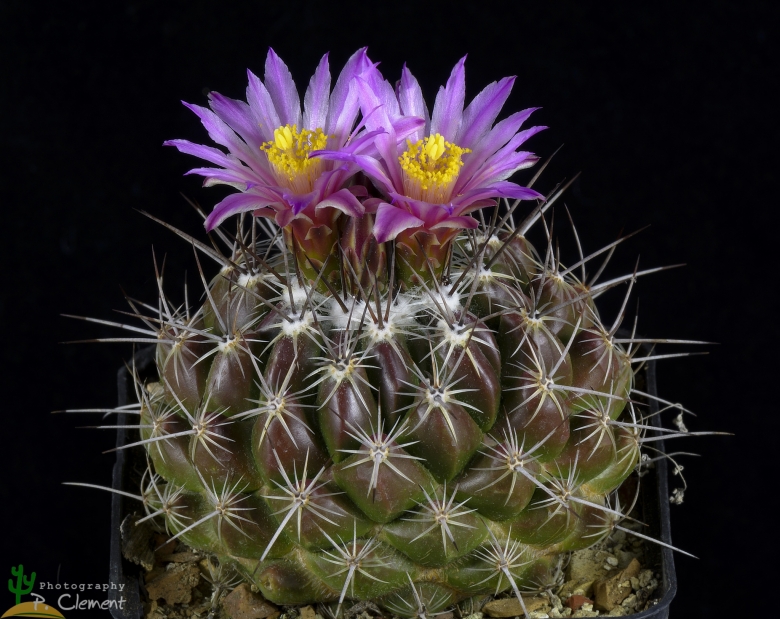 Origin and Habitat: Thelocactus conothelos is fairly widespread and quite abundant in the Mexican states of Nuevo León, San Luis Potosí, and Tamaulipas, the extent of occurrence is likely to be close to 20,000 km²
Altitude: 1200 to 2200 metres above sea level.
Habitat: The species grows in xerophytic shrubland (matorral xerofilo) on limestone hills along with Mammillaria candida, Mammillaria picta, Mammillaria arroyensis, Mammillaria crassimammillis, Turbinicarpus schmiedickeanus v. gracilis, Thelocactus bicolor, Astrophythum myriostigma and Echinocactus platyacanthus. Its range lies within the Meseta Central subregion of the Chihuahuan Desert ecoregion.

Description: Thelocactus conothelos is a nice solitary cylindrical cactus with large bubble tubercles and pink flowers. It is one of the cactuses that blooms early. Like many cactus forms of dry, hot region of Mexico, plants are strongly variable. Thelocactus conothelos has received many unnecessary infraspecific epithets, but the only acceptable distinctions are, the type and subsp. argenteus with dense silvery spines and subsp. aurantiacus with orange flowers.
Habit: Simple but occasionally clustering.
Stem: Spherical, elongated or somewhat cylindrical, 6-25-(45) cm tall and 7-17 cm across, yellowish green, greyish green to pale green.
Ribs: Not evident and replaced by upward pointing spiralled tubercles, the lower tubercles, conical, delta shaped to elliptical (8-)12-20(-24) mm long and 4-18 mm broad.
Areoles: Areoles with short furrows, with or (usually) without nectar-secreting glands, upper areoles oblique, white tomentose, typically 1-3 cm apart.
Central spines: 1-4, stouter and longer than the radials, somewhat spreading or ascending, acicular, nearly straight or slightly recurved, ochre, red, reddish-white or dark blackish-brown becoming grey with age and often shedding, up to (1-)1,5-5(9) cm long.
Radial spines: (7-)14-16(-23) needle-like, usually white or to greyish brown (5-)8-12(-20) mm long spreading.
Flowers: 3-5 cm long, (3-)4-5(-6) cm in diameter, tube well-developed, narrow, pericarpels naked below but with heavy scales above. Flowers are typically magenta, though there is a population near Matehuala, where white and magenta flowered plants grow together (but also yellow to orange-yellow or red).
Fruit: Spherical-oblong dry at maturity, 10-14 mm long, 6-9 mm in diameter, dehiscing by basal pores, scaly.
Seeds: 1,5-2,1 x 1,2-1,5 mm, testa cells conical pointed with a smooth surface. 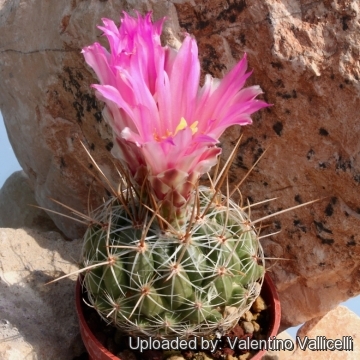 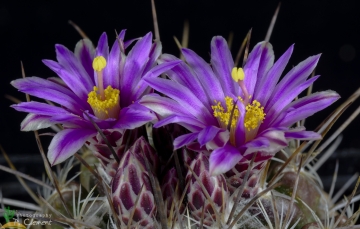 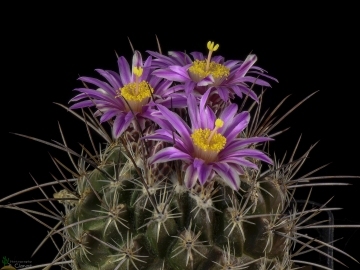 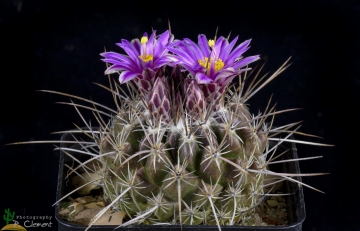