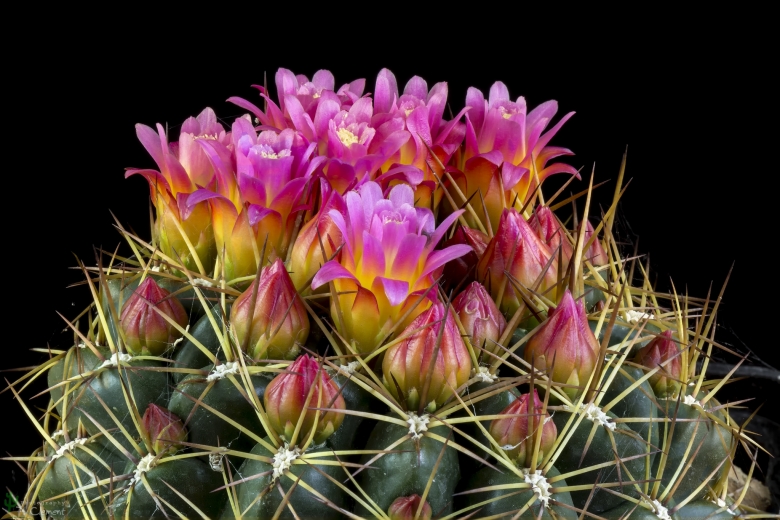 Origin and Habitat: Widespread in the Central Peruvian Andes at high elevations from Oroya to Cuzco
Altitude: 3000-4700 metres above sea level.
Habitat: Oroya peruviana has adapted to survive in extremely rocky habitats that other plants can't survive in because of the lack of soil (at least in large amounts) and how dry it is. The plants growing at higher altitutes are exposed to appreciable freezing in a tropical alpine climate where summer night-time temperatures can be -8° C.

Description: Oroya peruviana is an extremely variable slow-growing perennial cactus species that grows, as the Oreocereus do, in the high mountains of the Andes. It is (usually) solitary but may produce small clumps with age. The spines are very varied in form and colour and often appressed against the plant body in a manner reminiscent of a bird's nest. Some specimens of this species bloom very profusely.
Root: Tuberous.
Stem: Depressed globose or hemispheric and deep-seated in the ground, that eventually becomes shortly columnar, much-ribbed, 10-14(-20) cm broad and 5-25(-30) cm tall. Epidermis bright green to blue-green.
Ribs: 12-35 (usually 21), low, obtuse, divided into low tubercles.
Areoles: Long, narrow 8 to 12 mm long, whitish, closely set, very woolly, on the extremity of a groove in the tip of tubercles.
Spines: Ranging in colour from pale yellow, to orangish, to coppery gold to brown with darker bases and reddish tips , barely distinguishable as centrals and radials.
Radial spines: 15 to 20, variable, more or less pectinated, slightly curved inward, unequal, the longer ones about 2 cm long (usually less than 1,5 cm long).
Central spines: Sometimes as many as 6, but often wanting, a little longer and stouter than the laterals and usually reddish-brown in colour.
Flowers: Small,1,5 to 2 cm long, bell to funnel-shaped, often very numerous, produced from young areoles, in a dense cluster or ring around the crown of the plant, pink-orange-red with a whitish to lemon yellow centre; outer perianth-segments acute, reddish, the inner pink, yellow at base, linear, obtuse or apiculate; style pink above; stigma-lobes pale yellow. Perianth tube very short and covered with small scales. The Areoles of hypanthium and Perianth tube are slightly woolly. Oroya flowers look very similar to Eriosyce flowers but shorter.
Blooming season: Spring to summer.
Fruit: More or less spherical or short club shaped, hollow berries, slightly fleshy, yellow or reddish brown., and covered with small scale. Flowers remnants persistent.
Seeds: Helmet-shaped, reddish-brown to black, approx. 2 mm long. 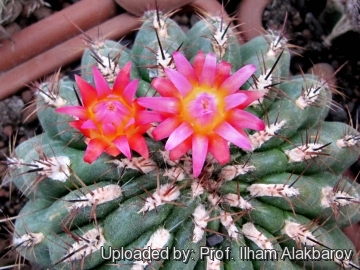 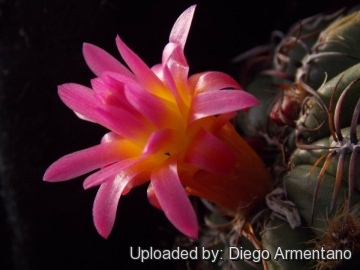 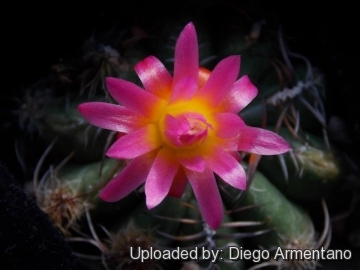 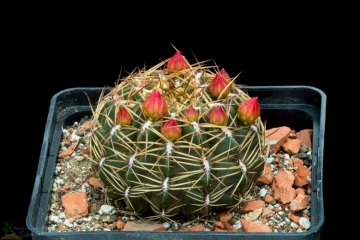 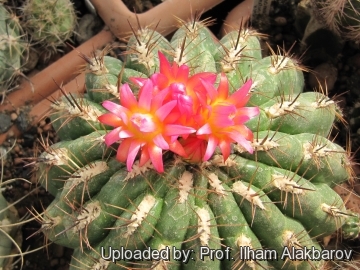 Cultivation and Propagation: Oroya peruviana is a summer grower species that is easy to cultivate. It is one of the most cold-tolerant South American species. It can grow outdoors and is hardy to -15° C or even less.
Growth rate: It is a relatively rapidly growing and easily flowering species that will make clumps given the best conditions.
Soils: It likes very porous standard cactus mix soil. Prefer a low pH compost, avoid substrata rich in limestone; otherwise growth will stop altogether.
Repotting: Use pot with good drainage.
Watering: Needs moderate to copious waterings in summer, but do not overwater (Rot prone), keep dry in winter.
Fertilization: Feed with a high potassium fertilizer in summer.
Hardiness: Reputedly very resistant to frost if kept on the dry side prior to, and during, cold weather (hardy to -15 C ° C, or less for short periods).
Exposition: The plant tolerates extremely bright situations but enjoys filtered sunlight or afternoon shade, inside it needs bright light, and some direct sun. Tends to bronze in strong light, which encourages flowering and heavy spine production.
Uses: It is an excellent plant for container growing. It always looks good and stays small. It look fine in a cold greenhouse and frame or outdoor in a rockery.
Pests & diseases: It may be attractive to a variety of insects, but plants in good condition should be nearly pest-free, particularly if they are grown in a mineral potting-mix, with good exposure and ventilation. Nonetheless, there are several pests to watch for:
- Red spiders: Red spiders may be effectively rubbed up by watering the plants from above.
- Mealy bugs: Mealy bugs occasionally develop aerial into the new growth among the wool with disfiguring results, but the worst types develop underground on the roots and are invisible except by their effects.
- Scales: Scales are rarely a problem.
- Rot: Rot it is only a minor problem with cacti if the plants are watered and “aired” correctly. If they are not, fungicides won't help all that much.
Propagation: Division, direct sow after last frost. Seeds germinate in 7-14 days at 21-27° C in spring, remove gradually the glass cover as soon the plants will be well rooted (ca 1-2 weeks) and keep ventilated, no full sun for young plants! To make a cutting twist off a branch and permit it to dry out a couple of weeks, lay it on the soil and insert the stem end partially into the soil. Try to keep the cutting somewhat upright so that the roots are able to grow downward.