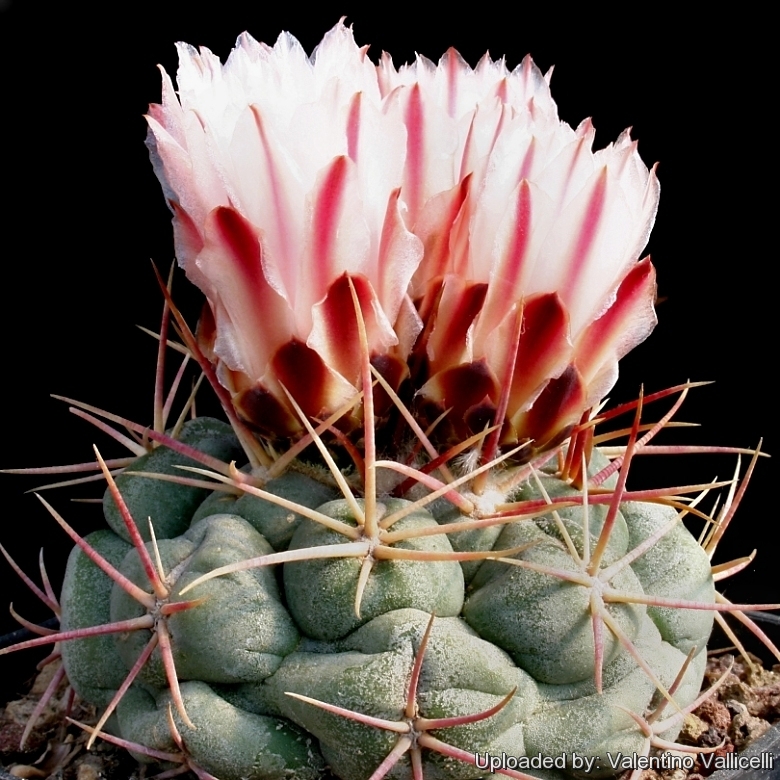 Description: Thelocactus hexaedrophorus subs. lloydii is one of the old controversial geographical or morphological forms of the variable Thelocactus hexaedrophorus that distinguishes from the standard species for the delta-shaped tubercles, the more numerous (up to 3) reddish central spines, more numerous (6-8) reddish white to brownish radials, and smaller flowers 3,3-3,6 cm in diameter. However it look very similar to other varieties of Thelocactus hexaedrophorus which are linked one to each others by populations of plants with intermediate characteristics. Due to the species variability it seems not justified to recognise this subspecies. Nowadays all this forms are thought to belong to a unique polymorphic species.
Habit: Solitary and strongly armed cactus. Rarely clustering after many years, from the base.
Stem: Depressed-globose, 8 to 12 cm broad, grey to bluish-green, covered by a glaucous/grey pruina.
Tubercles: Thick but low, often wider than long, sometimes 4 cm. wide; flowering groove rather conspicuous but narrow, extending from spines to about half-way to axil of tubercle;
Spines: It has 1-3 reddish-white-brown central spines with sharp yellowish-crimson tips, the longer ones up to 6 cm, and 6-8 reddish-white brown radial spines per areole. Ascending from and curved outward from middle, terete and somewhat angled at base. The spines are often highly coloured and maintain that bright tint on at least part of the spines for a long time but bleach out to a pale grey-brown as they became older.
Flowers: Light pink to almost white with a darker midline, never deep purplish pink. Filaments whitish, anthers honey/yellow, style yellowish, (eventually pinkish at top), stigma lobes pinkish/yellowish. 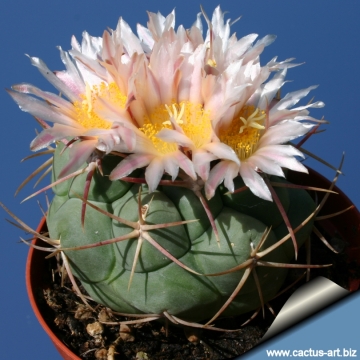 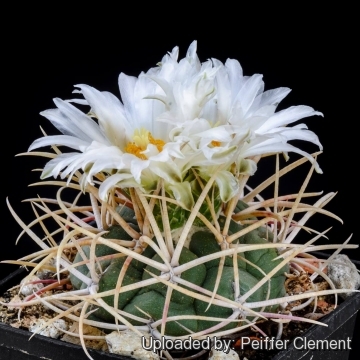 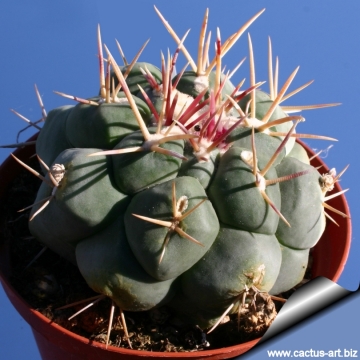 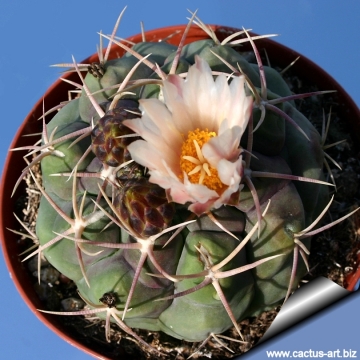 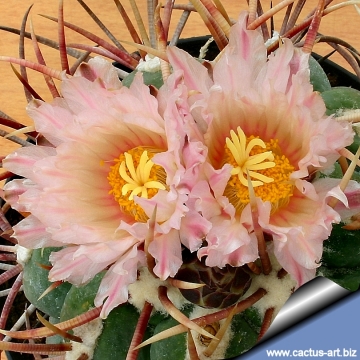 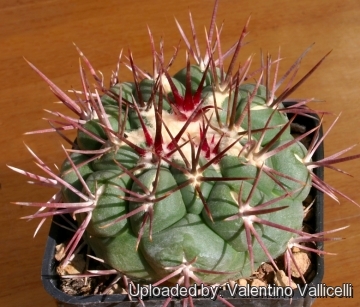 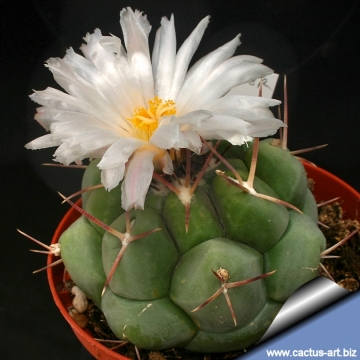 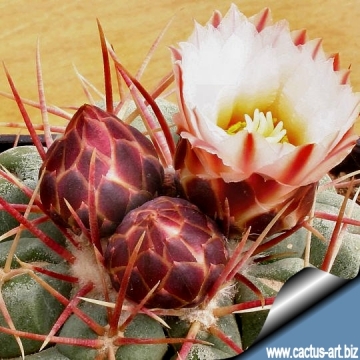 Cultivation and Propagation: Thelocactus hexaedrophorus subs. lloydii is easy to cultivate and recommended for any collection that needs lots of light with ample airflow.
Growth rate: It is a small growing, but easily flowering species. It offset from the base and can fill a 25 cm pot in just a few years given the best conditions.
Soils: It likes very porous standard cactus mix soil with little organic matter (peat, humus).
Repotting: Repotting every 2-3 years. It will need a pot with sufficient depth to allow the tap root. As it is especially prone to rot under-pot in a smaller container filled with very porous compost. Use pot with good drainage.
Watering: Water regularly in summer, but do not overwater (very wet-sensitively, especially in light of its succulent root system). Its roots are easily lost in pots that stay damp for any length of time. Keep dry with ample airflow in winter. In the rest period no high atmospheric humidity!! Care must be taken with watering as they tends to become swollen and untidy in growth habit if given too much water and shade.
Fertilization: During the growing season enrich the soil using a fertilizer rich in potassium and phosphorous, but poor in nitrogen, because this chemical element doesn’t help the development of succulent plants, making them too soft and full of water.
Hardiness: Reputedly sensitive to frost , but less so if kept on the dry side prior to, and during, cold weather (hardy to -7° C for short periods). However some warmth throughout the year will increase the grower's success (minimum 5° to 8°C during rest season).
Exposition: Outside bright sun, filtered sunlight or afternoon shade, inside it needs bright light, and some direct sun. Subject to sunburn if exposed to direct sun for too long. Tends to bronze in strong light, which encourages flowering and heavy wool and spine production.
Uses: It is an excellent plant for container growing. It always looks good and stays small. It look fine in a cold greenhouse and frame.
Pests & diseases: It may be attractive to a variety of insects, but plants in good condition should be nearly pest-free, particularly if they are grown in a mineral potting-mix, with good exposure and ventilation. Nonetheless, there are several pests to watch for:
- Red spiders: Sensitive to red spider mite. Overhead watering is helpful in controlling mites.
- Mealy bugs: Occasionally mealy bugs they develop aerial into the new growth among the wool with disfiguring results, but the worst types develop underground on the roots and are invisible except by their effects.
- Scales: Scales are rarely a problem.
- Rot: Rot it is only a minor problem with cacti if the plants are watered and “aired” correctly. If they are not, fungicides won't help all that much.
Reproduction: Nearly always from seed, since the plant rarely produces plantlets.