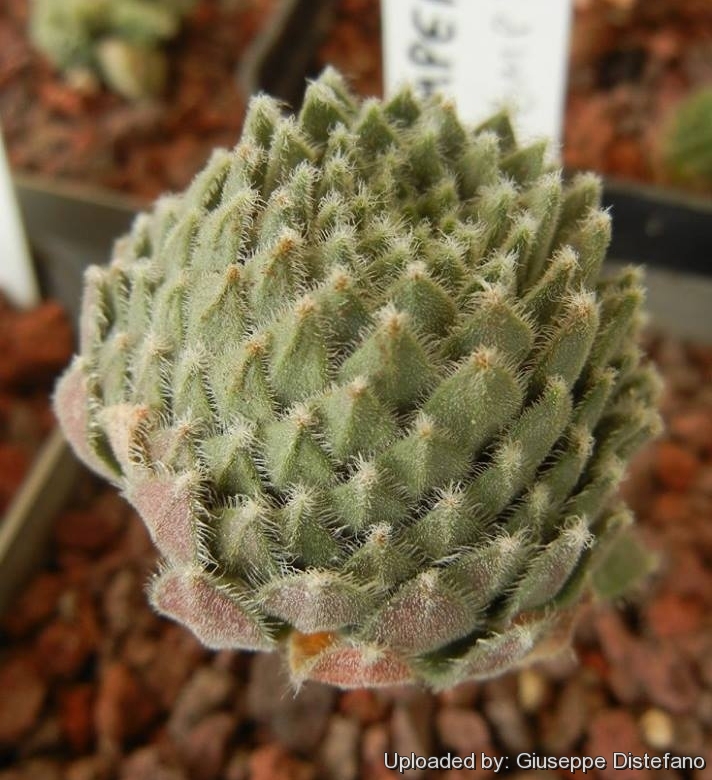 Description: Sempervivum x thompsonianum is an unusual, most ornamental, sempervivum species with fringed, downy rosettes of yellow-green. Flushed red on the outside. The small crowded leaves resemble a furry ball. This species is presumed to be a natural hybrid between S. macedonicum and S. octopodes. Now we find it mostly as Sempervivum × thompsonianum in the nomenclature or sometimes even as S. thompsonianum from less diffident authors. This species often looks different in collection than the plant in the nature.
Similar species: S. thompsonianum resembles Sempervivum macedonicum Preager, in having central rosette leaves curled inwards and similar leaf pubescence and long marginal hairs. The sharply-pointed and more erect outer rosette leaves, flushed with red on the outside, readily distinguish S. thompsonianum from S. macedonicum. Sempervivum thompsonianum also strongly look like Sempervivum dolomiticum.
Derivation of specific name: S. thompsonianum was named after Mrs. H.P. Thompson, who collected many Sempervivums in the Balkan Peninsula.
Rosettes: Small, many leaved, nearly spherical, mostly1,5-2 c. in diameter with the outer leaves erect. The diameter of the rosettes must be a variable characteristic: at lower altitudes (1850 m to 2050 metres ) biggest plants may be occasionally up to 4 cm in diameter, while at the higher altitudes (2150 and 2270) the smaller plants may be less than a centimetre in dimeter.
Leaves: Ovate-lanceolate, acute and pubescent. Margins with cilia (marginal hairs) of unequal length about three times as long as the surface pubescence. Leaf colouring is a yellowish-green; the outside leaves are strongly flushed with red when grown fully exposed. Offsets are produced on rather slender brown stolons 5 to 8 cm long, but the length of the stolons must be a variable characteristic: sometime less than a centimetre.
Inflorescence: Flower stems ± 8 cm tall, very slender and covered with few, narrow, lanceolate leaves. Inflorescence is few-flowered and close-packed.
Flowers: Petals with white margin; otherwise mainly deep pink, but yellow towards the apex. Filaments purple, anthers yellow. 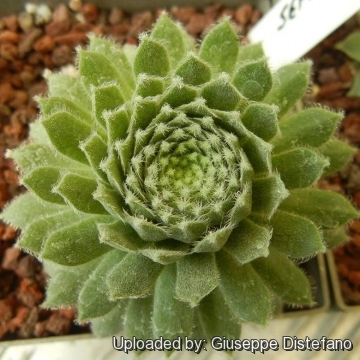 Sempervivum х thompsonianum Photo by: Giuseppe Distefano
Send a photo of this plant.

Cultivation and Propagation: Sempervivum x thompsonianum is a small, evergreen perennial succulent that grow in very tight rosette forming mats up to 30 cm (or more) in diameter, occasionally cultivated in rock gardens. It is quite easy to grow in container or in the rock garden and offsets increase well. It is shy in producing flowers. t grows well in any position where the common Houseleek (Sempervivum tectorum) may be grown.
Soil: Although it grows on limestone substrata, it does not seem fussy about conditions in the garden. Require a well drained succulent soil mix. Outdoors it will spread itself through narrow locations between rockery stones. It does not prefer rich loamy soil; gritty dirt with pea gravel suits it.
Watering: It takes little water & could rot if watered too often. During the growing season, the plants are watered and allowed to dry slightly before watering again. Although they can take a great deal of drought, they seem to do better with regular (but moderated) watering. During the winter months, plants are watered very little.
Exposition: It need full sun to light shade and tolerates shade, but a sunny spot is nicest, though in warmer climates it needs protection from too much sun because it is not very heat tolerant.
Frost Tolerance: Hardy at least to -12°C (or less).
Remarks: After the plant blooms and sets seed it will die, but there will be many offsets to take its place.
Uses: It is choicest species for the rock-garden and borders, it can be used for edgings, lines and panels in the flower garden, and naturalized on walls, ruins, or any position where the Common Houseleek thrives.
Propagation: Is very easily propagated by division of larger clumps or by offsets.