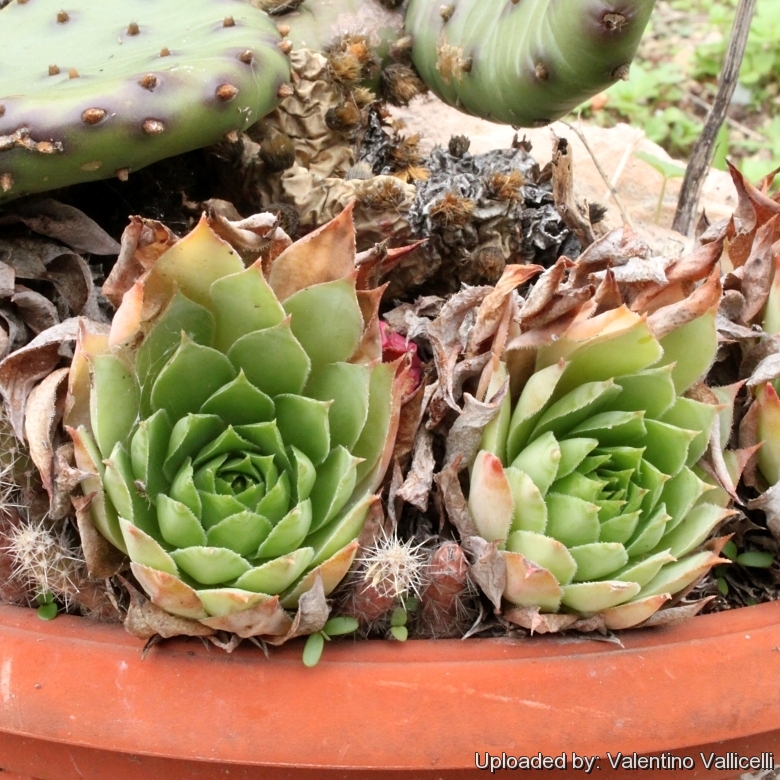 Origin and Habitat: Its country of origin is unknown; however, it is common in many parts of central Europe to Balkans on rocks as a lithophytic and on the roofs of buildings.

Description: Sempervivum tectorum is the best-known cultivated Sempervivum very variable and will hybridise easily with many other species for new varieties. There are even dwarf, monstrous and crested forms and they all hybridize. It is a very variable species comprising innumerable morphological and local form. They vary mostly in rosette size, colour, number and length of the leaves and length of the inflorescence.
Habit: It is a small, evergreen perennial succulent that grow in very tight rosettes with spreading offsets. It forms mats up to 50 cm (or more) in diameter.
Rosettes: 2-8 cm (rarely to 18 cm) in diameter, flat and open.
Leaves: Obovate-lanceolate, hairless but ciliate on the margins, sharply mucronate, very fleshy, bright to dark green sometimes red-brown or purple, red or white at the base and frequently tipped with purple-brown.
Stolons: up to to 4 cm, stout, reddish.
Roots: It has a perennial fibrous root Root leaves in form of a full bloom double rose
Inflorescence: Flowering stem stout, upright from 20-40 cm (rarely to 50 or more cm) in height, round, fleshy having alternate lanceolate thinner leaves on it of a reddish colour (only the upper stem-leaves hairy on the surfaces), at top branched and forming a sort of large and flat corymb, the branches spreading and bending back. Flowers per corymb 40 to 100.
Flowers: Clustered, each about 2,5 cm across, upright, pubescent, flesh coloured. Petals 12-16, dull pink or purple. Anthers orange-brownish. Sempervivum tectorum exhibits almost constantly the singular phenomenon of anthers (of the inner whorl of stamens) sterile and bearing carpels (ovules) instead of pollen.
Blooming season: Summer, lasting into early autumn. The rosette that bloomed then dies after setting seeds.

Subspecies, varieties, forms and cultivars of plants belonging to the Sempervivum tectorum group

Notes: The most commonly used name for Sempervivum is houseleek , which is particularly applied to Sempervivum tectorum. Tectorum means of the roofs of houses. Covering the roof tiles of a house‐top with S. tectorum is said to protect against lightning or thunder. On slate roofs, they had the added bonus of binding the slates together and on thatched roofs they provided protection against fire. On any house, they keep witches away. The houseleek was dedicated in Classical times to Jupiter the Roman god of thunder and lightning, which explains the plant's supposed protective role against lightning strikes and fire. 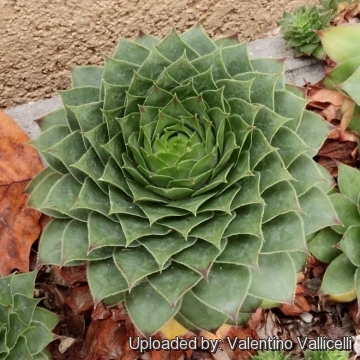 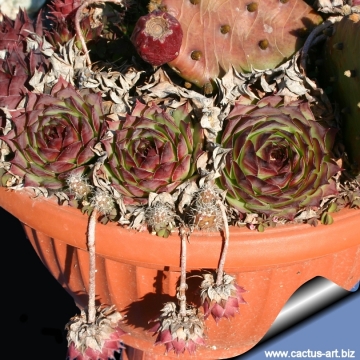 Cultivation and Propagation: Always an interesting plant and very easy to grow in container or in the rock garden.
Soil: Require a well drained succulent soil mix. Outdoors it will spread itself through narrow locations between rockery stones. It does not prefer rich loamy soil; gritty dirt with pea gravel suits it.
Wateing: It takes little water & could rot if watered too often. During the growing season, the plants are watered and allowed to dry slightly before watering again. Although they can take a great deal of drought, they seem to do better with regular (but moderated) watering. During the winter months, plants are watered very little.
Exposition: It need full sun to light shade and tolerates shade, but a sunny spot is nicest, though in warmer climates it needs protection from too much sun because it is not very heat tolerant.
Frost Tolerance: Hardy at least to -12°C (or less).
Remarks: After the plant blooms and sets seed it will die, but there will be many offsets to take its place.
Traditional medicine: It has bemused as a poultice to treat abscesses, wounds and skin conditions, ranging from burns and eczema to ringworm, shingles, nose-bleeds and bee and nettle stings. Its juice was dropped into sore eyes and ears (in the Middle Ages it was called 'erewore'). In official medicine, the plant was regarded as 'cooling', and from classical times onwards was used to treat inflammations.
Propagation: Is very easily propagated by division of larger clumps or by offsets.