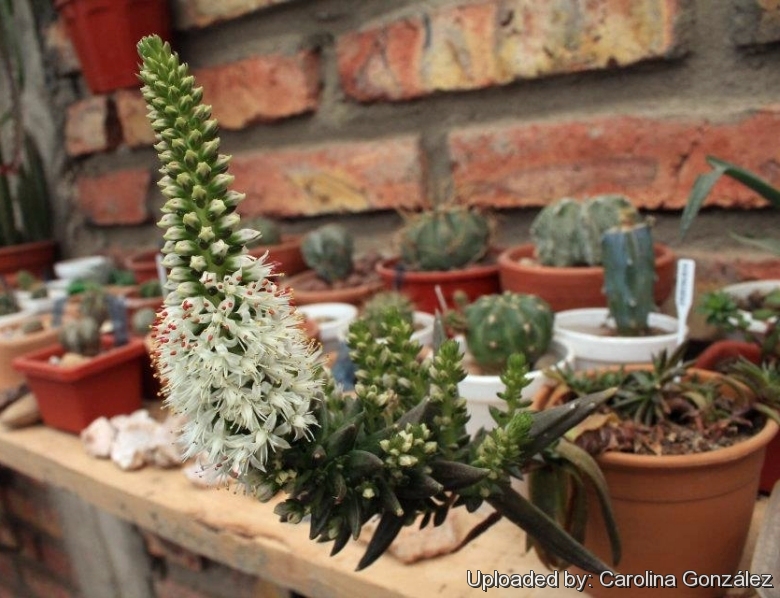 Origin and Habitat: Temperate Asia, China (Anhui, E Heilongjiang, Jiangsu, Shandong, Zhejiang ), Russia, Korea & Japan.
Habitat and ecology: Rocks on low mountains, along streams in China and surface of mountain rocks in Korea and Japan, both in sunny or semi-shaded (light woodland) location with a well-drained and moist soil that is low in nutrients. It is also grown on house roofs. 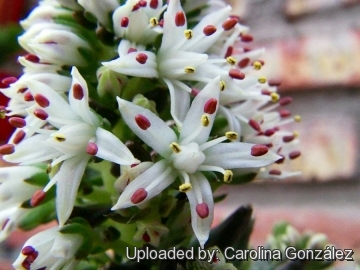 Orostachys japonica Photo by: Carolina González
Send a photo of this plant.

Cultivation and Propagation: Orostachys japonica is an interesting plant and easy to grow in container or in the rock garden. It grows well in any position where the common Houseleek (Sempervivum tectorum) may be grown, and in any soil. It can also be cultivated on the roofs of buildings.
Soil: It does not seem fussy about conditions in the garden. Require a very freely drained soil. Outdoors it will spread itself through narrow locations between rockery stones. It does not prefer rich loamy soil; gritty dirt with pea gravel suits it.
Watering: It takes little water & could rot if watered too often. During the growing season, the plants are watered and allowed to dry slightly before watering again. Although they can take a great deal of drought, they seem to do better with regular (but moderated) watering. During the winter months, plants are watered very little.
Exposition: It need full sun to light shade and tolerates shade, but a sunny spot is nicest, though in warmer climates it needs protection from too much sun because it is not very heat tolerant.
Frost Tolerance: Hardy at least to -12°C (or less).
Remarks: After the plant blooms and sets seed it will die, but there will be many offsets to take its place.
Uses: It is choicest species for the rock-garden and borders, it can be used for edgings, lines and panels in the flower garden, and naturalized on walls, ruins, or any position where the Common Houseleek thrives.
Medicinal uses: The leaves and stems contain several medically active constituents including fatty acid esters, Friedelin and flavonoids. They are antispasmodic and cytotoxic. It strengthens the immune system of our body to produces specialized antibodies, preventing some disease. It has anti-cancer effect, suppressing the propagation of cancer cells. For this reason, it uses in the treatment of tumor and other disease. In Korea, they are used in the treatment of cancer, gingivitis, coagulation and metritis.
Propagation: It is usually propagated from seed or offsets.