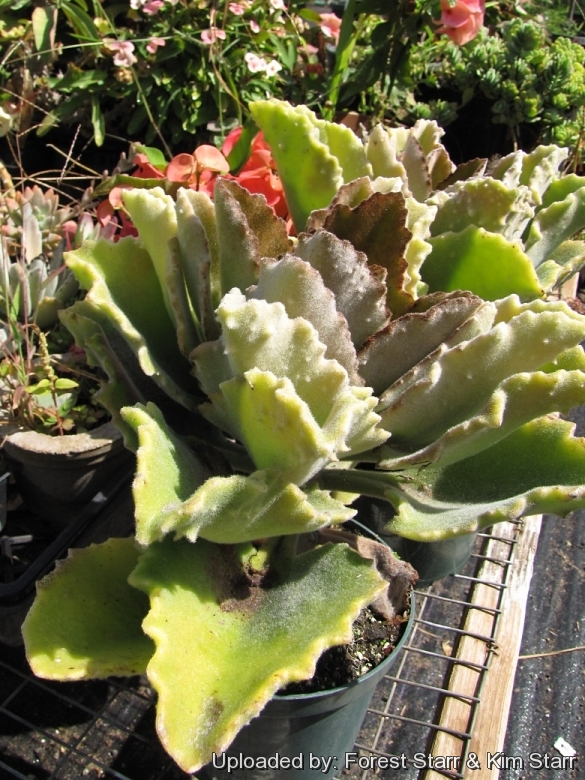 Description: Kalanchoe beharensis 'Fang' (Stalactite Plant) is a large succulents shrub with a unique grotesque shape. Its large soft leaves are covered with dense hairs and have many gnarly, fang-like protuberances on the undersides. These thorns are really just bunched up protrusions, so they are not sharp in any way. These fang-like tubercles, which give the cultivar its name are most noticeable up the upwardly inclined new leaves. Occasionally will flower and while the pale yellow flowers with red striations are interesting, it is the foliage that makes this plant attractive. It is quite similar to an older Hummel hybrid called 'Rose Leaf' (see: Kalanchoe beharensis cv. Roseleaf) that was the result of crossing Kalanchoe beharensis with Kalanchoe tomentosa. The difference Is that rose leaf lacked the tubercles on the back of the leaf that gives this cultivar its name. Presumably this plant is of similar heritage or is a sport of 'Rose Leaf'.
Habit: Under the right conditions it can attain the proportions of a shrub, reaching 60-90 cm in height.
Stem: Usually simple below and branched above, slender, succulent, becoming hard and woody, notched, pubescent with brownish hairs, 2-12 cm in diameter and with peculiar scars left where the leaf petiole where attached to it.
Leaves: 7 to 10 cm long, crowded at the tips of branches, opposite, petiolate, fleshy, triangular, auricled, unlobed but have dentations along the entire margin. Blades golden-brown when grown in the sun or a silvery-gray in the shade and have dark brown spots along the leaf margin and hooked tubercles across the upper half of the backsides of the leaves.
Inflorescences: Terminal in the leaves' axils about 50–60 cm high, forming a branched, many flowers, panicle 20-30 cm tall.
Flowers: Small, numerous red-orange or yellowish. They are not particularly showy on short pedicels (stalks). The calyx is 7 mm long with lobes that are oblong and acuminate. The corolla tube is urn shaped and 7 mm long.
Blooming season: In spring to summer.

Subspecies, varieties, forms and cultivars of plants belonging to the Kalanchoe beharensis group

Cultivation and Propagation: Kalanchoe beharensis is very easy to culture and makes an interesting plant in any collection and is rewarding. It is also easy to take care as indoor plant.
Potting mix: They thrive in nutrient poor soils consisting of equal parts of loam and sand, with pumice or lava grit added to ensure good drainage.
Exposure: Mature plants do best in full sun to partial shade.
Watering: It needs moderate watering in autumn and spring while in summer it should be watered thoroughly and allowed to dry before watering again. In winter give only occasional watering (only when the plant starts shrivelling), but it will generally grow even in winter if given water. These plants will survive on neglect. Over-watering is the most common cause of plant failure.
Frost resistance: prefers intermediate to warm temperatures but it is hardy to -2° C for short periods.
Propagation: It is propagated by removal of small offsets at the base of the main plant or by leaf and stem cuttings. It grows easily roots at the end of a leaf stalk which has fallen onto ground. New plants are ready within months.