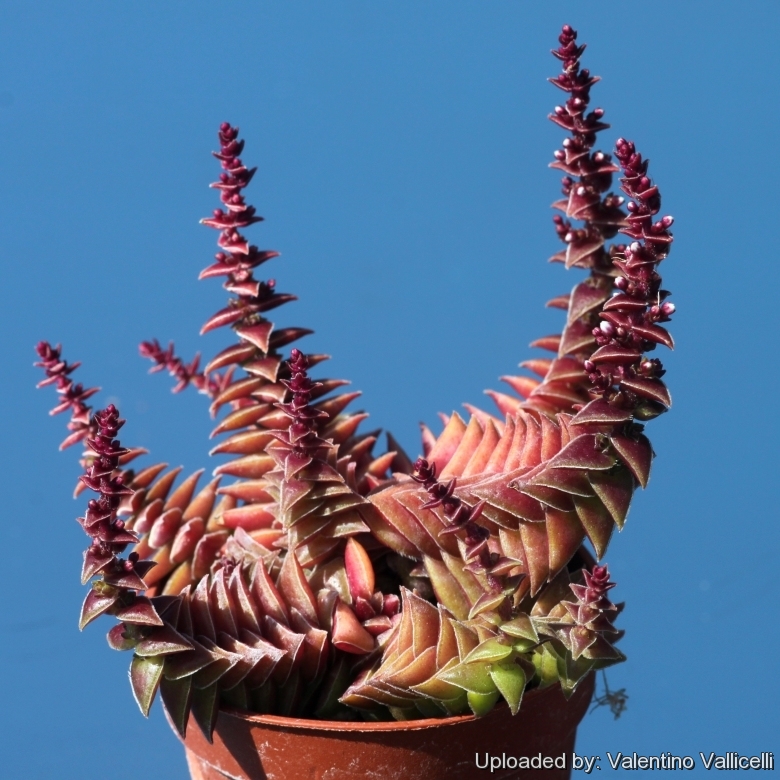 Origin and Habitat: Crassula capitella subs. thyrsiflora occurs widely in the, Free State, Western and Eastern Cape Provinces, the Northern Province and south-eastern Namibia.
Habitat and ecology: Succulent Karro and Nama Karoo. It grows in a wide range of habitats, usually on dry rocky slopes, sheltered by either rocks or other plants.

Description: Crassula capitella subs. thyrsiflora is a prolific and mat-forming perennials succulent with many branches of up to 0.4 m high when in flower (but often much smaller). The leaves are borne in rosettes and are sometimes neatly arranged in four ranks or sometimes in a spiral. They are bright green but may take on various brownish or reddish hues, especially when the plants become stressed through lack of water. It flowers at the ends of pagoda chains. The tiny flowers are white but occasionally tinged with pink, in a thyrse (long, spike-like cluster), gradually attenuated, decompound, 15- 25 cm in length. Once it finishes blooming, the plant falls apart and the individual leaves hit the ground and root, making new plants. It is the most complex of all the subspecies. It usually forms basal rosettes but may be decumbent, the leaves are acute-tipped, sepals glabrous, the petals usually have rounded appendages, styles are distinct and insignificant stigmas are terminal.
Stems: Herbaceous, round, terete, erect, a span (or more) high, smooth.
Leaves: Rosulate, perfoliate, often 4-ranked, 1.5-8 cm long, 0.5 - 1.8 cm broad, ovate, flattened, glabrous, green to bright purplish-red (dry exposed places), upper face slightly convex, flat to concave, lower face convex, margin entire to ciliate, tip acute. The brittle leaves shed easily and develop into new plants.
Inflorescences: Unbranched to branched with pedunculate dichasia.
Flowers: Sepals to 2.5 mm long. Petalas oblong-obovate, mostly cream but occasionally tinged with pink, with a rounded dorsal appendage.
Blooming season: Flowers mid-summer to autumn. 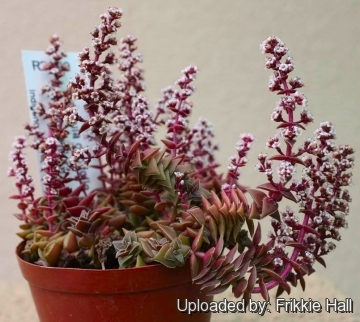 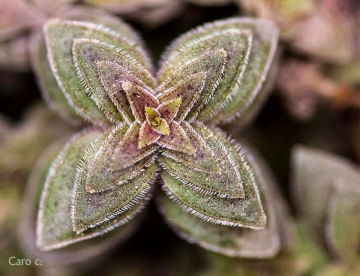 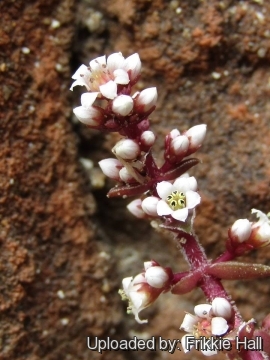 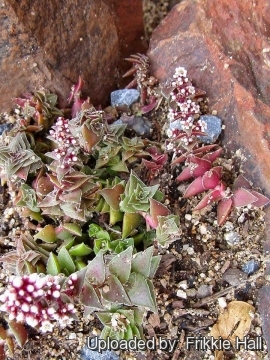 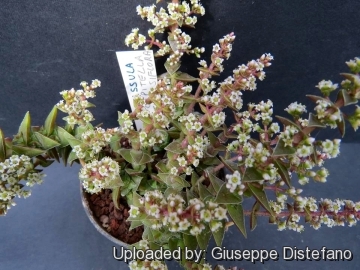 Cultivation and Propagation: Crassula capitella subs. thyrsiflora is not difficult to cultivate, loves heat and is easy to root and grow. It thrive with bright light and ample airflow. The leaves on this succulent can either appear as bright apple green or flaming red. It makes a nice groundcover in subtropical climates and is drought tolerant and only want light watering.
Growth rate: Moderately fast (bordering on invasive!) plant for the garden.
Soil: It grows best in sandy-gritty soil. Good drainage is very important as it is prone to root rot.
Repotting: Repot every two years in spring. Do not radically cut off roots: about 10 percent of the root ball is right.
Fertilization: Feed it from mid spring to early autumn every four or five weeks with a fertilizer specifically formulated for cactus and succulents (poor in nitrogen), including all micro nutrients and trace elements diluted to ½ the strength recommended on the label. Do not feed plants during winter.
Watering Needs: It is a dry-tolerant plant. Water regularly in the growing season, but avoid water-logging and let dry between waterings. Water with caution in winter, as the plant can lose its roots if the soil stays cold and wet for extended periods. The lower the temperature the less water is needed. If grown in a container, bottom watering by immersing the container is recommended. Mist spraying is not needed, it must have very dry atmosphere.
Sun Exposure: Does well in filtered sun, but can handle some shade, too. In shade the leaves colour will remain more green, while in harsh full sun conditions the foliage can develop a pinkish tinge. In summer keep cool and provide some shelter from direct sun during the hottest hours. It can be sunburned if moved from shade/greenhouse into full sun too quickly. It tends to get leggy in deep shade.
Frost Tolerance: Protect from frost to prevent scarring. It requires a minimum temperature of about 5°C, but will take a light frost and is hardy down to -5° C for short periods if it is in dry soil. USDA zones 9A – 11. In areas prone to frost, grow in an intermediate greenhouse or conservatory, in pots. The plant may be kept indoors throughout the year at a minimum winter temperature of 10°C not exceeding 18°C. In summer, the temperature will rise higher, but as this is accompanied by better light it does not matter. In colder climates plant this in a container, so it can be moved into a protected area when cold.
Garden uses: They make wonderful rocker plants in hot, dry areas and also grow well in containers or luminous patios. These crassula plants are great for hanging baskets too.
Pests and diseases: May be susceptible to mealybugs and rarely scale. Protect from cold. Occasionally suffers from foliage edema which is thought to be the result of rapid changes in available moisture.
Maintenance: At the end of summer plants get quite long-shanked with dried flowering stalk and so is a good time of year to trim them back substantially. It reverts back to its more ornamental, compact form in winter.
Propagation: From seed but it is easily increased by cuttings. Cuttings root easily. It is also possible, to plant the leaves in good, sandy soil where they will take root - members of this family often propagate vegetatively in this way. Take leaf cuttings in spring and summer. Detach a leaf from an established plant by pulling or bending, and leave it to dry for a day. Insert the broken end of the leaf into a mix of one part slightly moist peat and two parts sharp sand Firm the mix around the bases of each cut-ting, which will later grow roots. The leaf cutting can then be repotted.