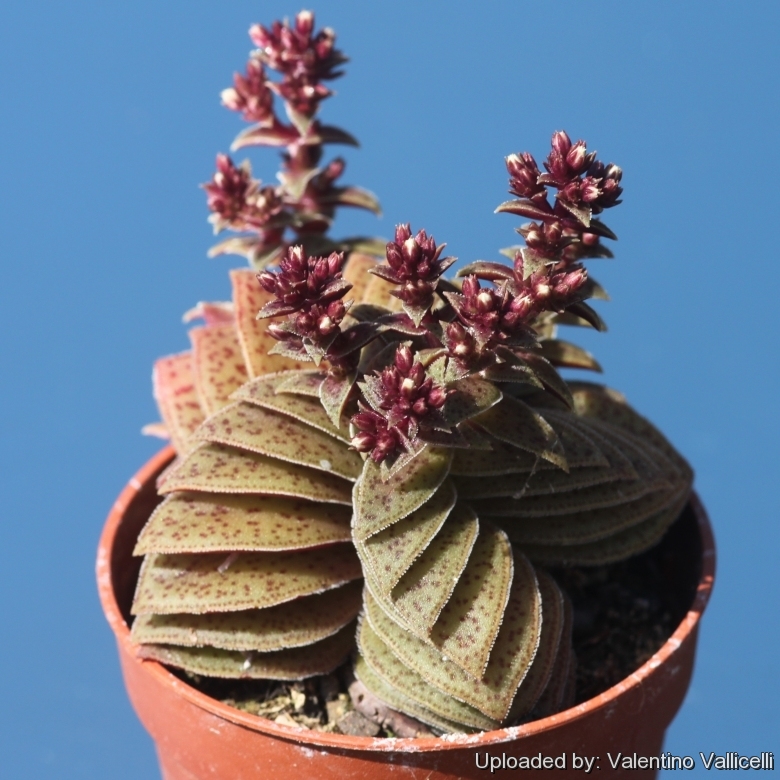 Origin and Habitat: Crassula capitella is a variable species native to southern Africa; it is found in Transvaal, Free State, Eastern Cape, and in some parts of southern Namibia and Botswana. Subsp. capitella spreads from the Eastern Cape westwards to the Little Karoo and north-wards into the Free State.

Description: Crassula capitella is a variable subshrubby succulent species up to 40 cm tall when flowering, embracing a full range from perennial decumbent plants which rarely form basal rosettes to biennials plants with one rosette less than a span tall. The narrow and pointed stacked leaves forms a characteristic spirally arranged or 4-ranked rosette and the rosette that bloom will die. It blooms in the summer and forms a spike-like inflorescence with small white flowers. Three or four subspecies are recognized, the nominate form, subs. thyrsiflora (Thunb.) Toelken, subsp. meyeri (Harv.) Toelken and (possibly) subsp. nodulosa (Schönland) Toelken. Some of its subspecies and varieties were previously considered good species on their own. It was introduced in Europe in 1774 by Masson.
subsp. capitella: This subspecies is mostly biennial with only one rosette not tuberous at the base.
Stems: Round, smooth, erect or decumbent and usually woody, sometimes branched at the top.
Leaves: It opposite pairs, sessile, connate, spirally arranged or 4-ranked in basal rosettes often recurved, cartilaginous, linear-lanceolate, patulous, pointed, (10-)20-70(-120) mm long and (3-)10-20 mm broad, usually smallest near the centre of the rosette, glabrous or hairy, pale green often red spotted, hydathodes red, scattered over upper surface. Margins ciliate with fine recurved hairs or papillae.
Inflorescences: The inflorescence emergeing from the centre of the rosettes is a hairless or hairy dichasia, a cymose inflorescence in which each branch bearing a flower gives rise to two other flowering branches,. It is distinguished from Crassula hemisphaerica by the leaves slowly decreasing in size on the flowering axis. Plants of subsp. capitella are distinguished from those of var. nodulosa by the glabrous bracts sub­tending the sessile dichasia, and the emarginate squamae found in specimens from the eastern parts of its distribution area.
Flowers: White, star-like, bisexual. Sepals 1-4 mm, triangular-lanceolate, pointed, with marginal hairs. Petals, white tinged pink, 2-5 mm (generally under 4 mm in length) arching, oblong-lanceolate, blunt, smooth with fleshy tips and a dorsal appendage. Stamens 2-4.5mm, anthers dark brown. Styles very short or absent. Stigmas broad and lateral.
Blooming season: Crassula capitella is a monocarpic species, meaning that it dies after flowering. Although their white flowers are attractive, each time they bloom, a rosette dies.
Remarks: The longer-leaved Crassula 'Campfire' (some-times identified as Crassula capitella cv. Campfire) turns orangey red when grown in full sun. 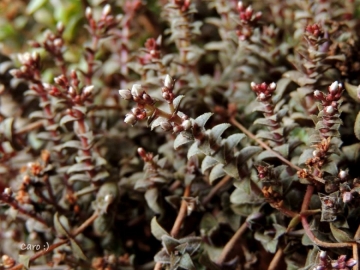 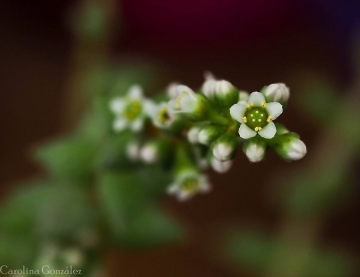 Cultivation and Propagation: Crassula capitella does well in containers, and makes a good houseplant. It is not difficult to cultivate. It thrive with bright light and ample airflow.
Growth rate: Moderately fast.
Soil: It grows best in sandy-gritty soil. Good drainage is very important as it is prone to root rot.
Repotting: Repot every two years in spring. Do not radically cut off roots: about 10 percent of the root ball is right.
Fertilization: Feed it from mid spring to early autumn every four or five weeks with a fertilizer specifically formulated for cactus and succulents (poor in nitrogen), including all micro nutrients and trace elements diluted to ½ the strength recommended on the label. Do not feed plants during winter.
Watering Needs: It is a dry-tolerant plant. Water regularly in the growing season, but avoid water-logging and let dry between waterings. Water with caution in winter, as the plant can lose its roots if the soil stays cold and wet for extended periods. The lower the temperature the less water is needed. If grown in a container, bottom watering by immersing the container is recommended. Mist spraying is not needed, it must have very dry atmosphere.
Sun Exposure: Does well in filtered sun, but can handle some shade, too. In shade the leaves colour will remain more green, while in harsh full sun conditions the foliage can develop a pinkish tinge. In summer keep cool and provide some shelter from direct sun during the hottest hours. It can be sunburned if moved from shade/greenhouse into full sun too quickly. It tends to get leggy in deep shade.
Frost Tolerance: Protect from frost to prevent scarring. It requires a minimum temperature of about 5°C, but will take a light frost and is hardy down to -5° C for short periods if it is in dry soil (Lethal temperature in habitat -6 to -10 ° Celsius). USDA zones 9A – 11. In areas prone to frost, grow in an intermediate greenhouse or conservatory, in pots. The plant may be kept indoors throughout the year at a minimum winter temperature of 10°C not exceeding 18°C. In summer, the temperature will rise higher, but as this is accompanied by better light it does not matter. Position the plant near a sunny window.
Garden uses: They make wonderful rocker plants in hot, dry areas and also grow well in containers or luminous patios.
Traditional uses: None recorded.
Pests and diseases: May be susceptible to mealybugs and rarely scale. Protect from cold.
Propagation: From seed but it is easily increased by cuttings. Cuttings root easily. It is also possible, to plant the leaves in good, sandy soil where they will take root - members of this family often propagate vegetatively in this way. Take leaf cuttings in spring and summer. Detach a leaf from an established plant by pulling or bending, and leave it to dry for a day. Insert the broken end of the leaf into a mix of one part slightly moist peat and two parts sharp sand Firm the mix around the bases of each cut-ting, which will later grow roots. The leaf cutting can then be repotted.