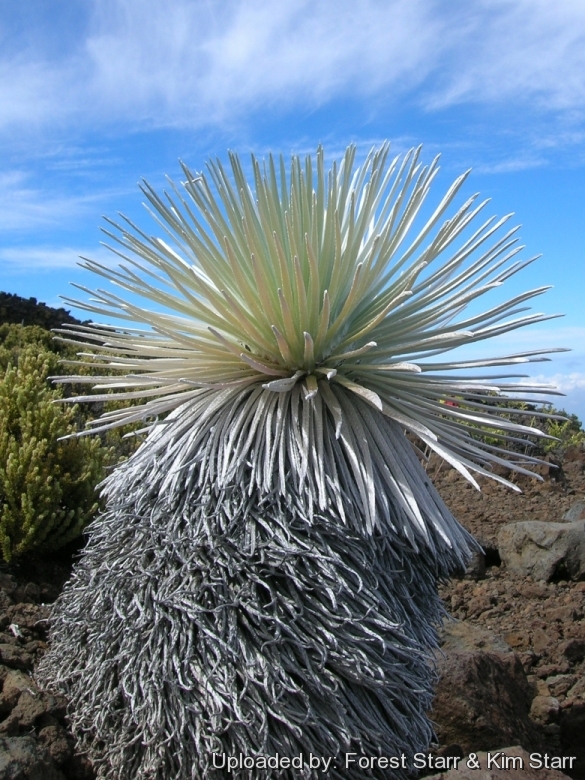 Origin and Habitat: Argyroxiphium sandwicense subsp. macrocephalum is found on the island of Maui, United States (Hawaiian Is.) in an area of occurrence about 1,000 ha. It grows at elevations of 2100–3,000 metres in the alpine deserts on the dormant Haleakal? volcano (on the summit depression, the rim summits, and surrounding slopes) in Haleakal? National Park. It also grows in dry to moist subalpine shrublands. There are currently seven known subpopulations. The population is estimated to number about 65,000 individuals and is increasing.
Habitat and ecology: Argyroxiphium sandwicense subsp. macrocephalum grows in a sparsely vegetated, lunar-like, but colourful landscape in cinder cone slopes, cinder fields, lava flows, rocky gulches and on cliffs on almost pure volcanic cinder, a dry, rocky substrate that is subject to freezing temperatures and high winds. The skin and hairs that cover the leaves are strong enough to resist the wind and freezing temperature of this altitude and protect the plant from dehydration and the sun. The leaves are arranged so that they and the hairs of the leaves can raise the temperature of the shoot-tip leaves up to 20 °C, thereby having adapted to the extreme high-altitude temperatures by focusing the sunlight to converge at this point and warm the plant. In the past excessive grazing by cattle and goats, and vandalism inflicted by people in the 1920s, had caused its near extinction. Often a living silversword was pulled up and brought back from a trip up Haleakala to prove that the hiker had reached the very tip of the volcano. Since strict monitoring and governmental protection took effect, the species' recovery is considered a successful conservation story, although threats remain. However, the taxon has an extremely restricted range and could easily be severely impacted by the loss of pollinators or any other catastrophic event. Direct human threats are currently controlled within the National Park, but as visitor numbers increase, so those threats could grow. The major threats to the taxon are overcollection and vandalism by humans, and trampling and predation by feral goats. The soft down and silver sheen of the leaves invites one to gently stroke the leaves, but to do so means a slow death for the delicate plant. Strong enough to weather mountain storms and blazing sun, this unique plant is so fragile that the oil from human skin, or the touch of a hard object, such as a fingertip, however light, damages the fine hairs which protect the `ahinahina, or silversword, from solar radiation and dehydration. Simply walking up to the plant damages the shallow root system, as the rocks under which it spreads, pressed down by the weight of feet or hooves, crush and cut through the delicate roots. The national park has been fenced to exclude goats, but the threat remains due to the possibility of ingress. Could also be susceptible to invertebrate pests (the species is self-incompatible and relies on insect pollination), particularly the invasive Argentine Ant (Iridomyrex humilis) which is now known to occur in the area. The number of individuals flowering in a given season ranges from zero to a few thousand. Continuation of the species is contingent on the fate of the many seeds produced. Seeding is also a critical time because damage to the flowers or stalk by insects before the seeds can mature can jeopardize the plant's entire reproductive output. For the first few years after establishment, seedlings are very susceptible to the impact of heavy rains and the accompanying sheet erosion.

Description: The Haleakala silversword, Argyroxiphium sandwicense subsp. macrocephalum, is a single-stemmed, or rarely branched, spherical rosette shrubs with numerous sword-like succulent leaves appearing to have been dipped in silver or mercury. At senescence, which often occurs when the plant reaches a diameter of approximately 0.5 metres, the plants produces a tall terminal inflorescence of maroon-purple ray flowers which resemble the sunflower in just a few weeks. It can flower in as little as three years in cultivation, but normally requires 15-50 or more years in natural habitat. Plants with multiple rosettes produce one inflorescence for each rosette; flowering may occur over several years before all rosettes are exhausted, then dies. Such is the life of a monocarpic plant. The silversword in general is referred to as `Ahinahina in Hawaiian (literally, "very gray").
Similar species: Argyroxiphium sandwicense subsp. macrocephalum differs from Mauna Kea plants (Argyroxiphium sandwicense subs. sandwicense) in the shorter and larger flower heads.
Rosettes: Dense, about 50 cm in diameter at maturity, epigeal, close to the ground, almost spherical, from a short and thick stem.
Leaves: Long, sessile, blades dagger-shaped, triangular in cross section, pointy, stiff, persistent, entire, 15–40 cm long and up to 1.5 cm wide, silvery pubescent for protection against high elevation UV radiation.
Inflorescences: The inflorescences is a terminal, erect, elongate, somewhat pyramidal, compound panicle, usually single, seldom branched up to 1,5(-3) m in height and 75 cm in diameter with a large, dense array of very numerous large capitula (flower haeds) intermingled with silvery bracts. The flowering stalk may have up 50-600 heads, nodding, each with 11–42 outlying pale red to maroon ray flowers and 50–600 disk flowers, 5–8 mm long, of similar colour. The flower stalk has numerous tiny sticky hairs to prevent crawling insects from damaging the plant. The flowers have a subtle beauty, and distinctly show their kindred with the common daisy. An exceedingly rare greenish-white mutant lacking normal flower pigmentation has been also described. Argyroxiphium sandwicense subsp. macrocephalum is self-incompatible.
Phenology: Flowering usually occurs from July through October. As seed development proceeds, the reserves accumulated in the rosette over a period of many years are mobilized into the fruiting stalk and the leaves become limp and dry. Following fruit maturation, the plant dies, seeds are dispersed, and the stalk and depleted leaves begin to disintegrate. A healthy `ahinahina produces may thousands of seeds on this stalk, after which it dies. If the stalk or blooms are damaged before reseeding, that plant has no second chance.
Fruit (achene): 7 –15 mm long.
Remarks: Multiple rosettes indicate this individual may have Dubautia genes, although it does not have the yellow flowers of most hybrids. 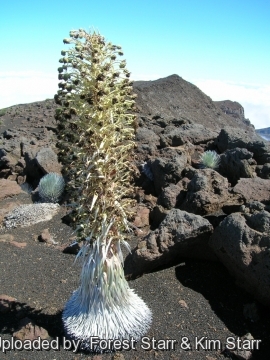 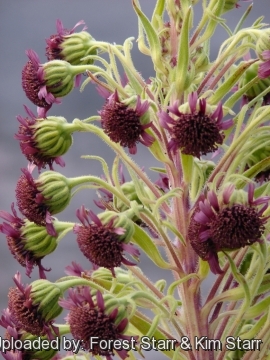 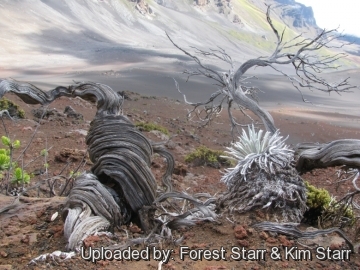 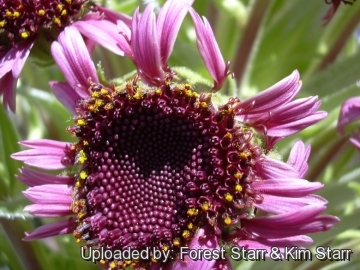 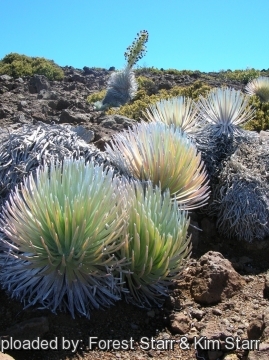 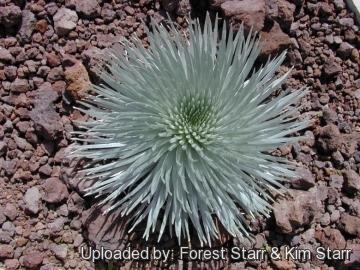 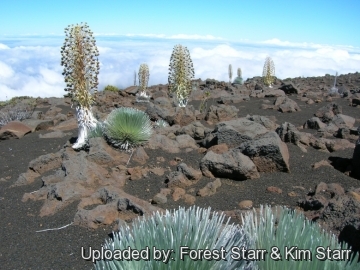 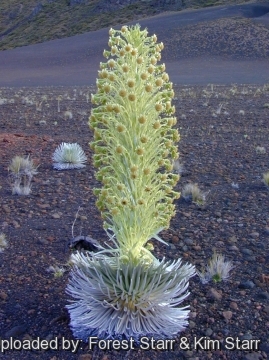