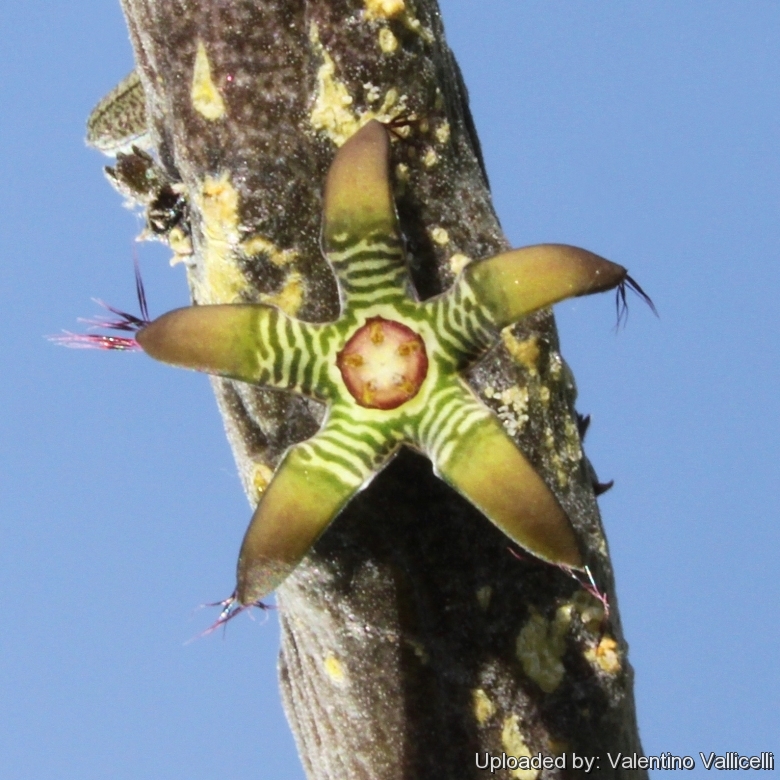 Origin and Habitat: Widespread in Saudi Arabia (southern Hijaz Mountains, along the Arabian Gulf and Red Sea coast ) Yemen and Somalia.
Habitat: It grows in dry, rocky countryside, shallow depressions and dry lake beds containing high levels of dissolved minerals, west-facing slopes and valley ether in tufts of grass, or in the shade of low shrubs or rocks, accompanied by other stapeliads, such as Caralluma sinaica, Caralluma quadrangula, Caralluma subulata, Caralluma adenensis and other succulents like Aloe niebuhriana. Critically endangered and ecologically protected, these succulent plants are of great ecological significance particularly in arid and semi-arid parts of Saudi Arabia or the Arabian Peninsula in general.

Description: Rhytidocaulon macrolobum is a small to medium sized Asclepiads branching to form a miniature tree. It is a succulent that conserve water in its stems, leaves or roots to withstand high temperature and low precipitation. The flowers are small but colourful, showy and particularly attractive for greenhouse cultivation. It is closely related to Rhytidocaulon piliferum from Somalia.
Stems: Light to dark brown becomimg greyish-brown as they ages, cylindrical, vaguely 4- (to 5-) ribbed, with a rough, wrinkled aged texture. Epidermis tessellated and rather scattered-papillose. Main stem 15-30 long 1 - 2 cm in diameter. Branches shorter and more slender. Tubercles semiglobose near the stem tips, less raised on older stem parts and rounded.
Leaves: Ephemeral, rudimental, lanceolate to narrowly triangular, 2-3 mm long up to 1 mm wide.
Inflorescences: Scattered on the young branches 1- to 2- (to 3-) flowered.
Flowers: Numerous, star-shaped, corolla about 1,5 cm wide, velvety, variable in colour and banding usually black or dark-maroon, but also dark-purple, dark green-brown or green, inside basally cream-coloured cross-banded with red-brown and the centre has often red tones to it with purple frilly vibratile hairs on the margins that blow in the breeze to attract its pollinators (flys). Flowers have a particular scent vaguely remembering of citrus.
**Fruit: Greyish-green, horn-shaped, straight, upright, approx. 5-7 cm long and 5-6 mm wide.
Seeds:*** Brownish 5-6 mm long and about 3 mm wide.

Subspecies, varieties, forms and cultivars of plants belonging to the Rhytidocaulon macrolobum group 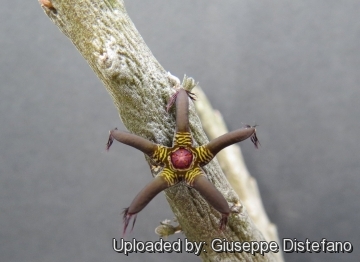 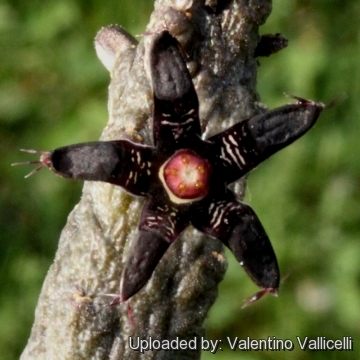 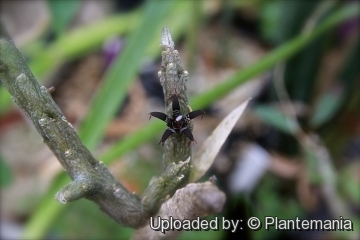 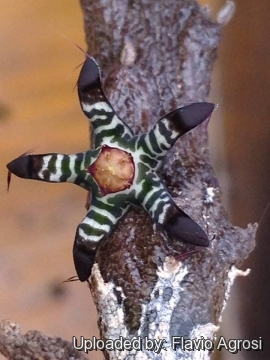 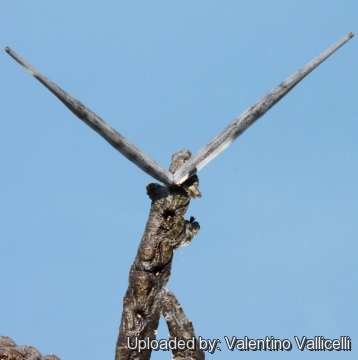 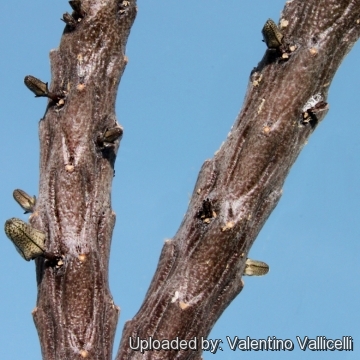 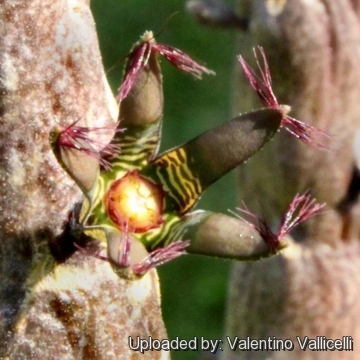 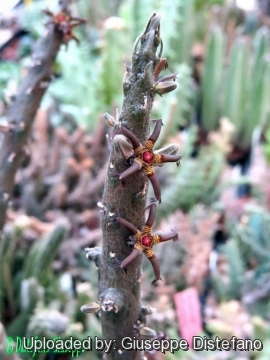 Cultivation and Propagation: It is a summer-growing species that like many of the plants of this family which comes from Arabia and East Africa is not easy to cultivate. This plant is extremely xerophytic, adapted to very dry soils and is quite susceptible to over-watering if kept in a non ventilated place.
Growth rate: Relatively fast-growing that offsets freely to form small clusters quickly.
Soil: Grow it in an open mineral, sandy-gritty cactus compost and provide a very good drainage.
Exposure: Keep in part to full shade. It has a good heat tolerance.
Watering: Water during the growing period and let dry out when it is dormant. Mature individuals easily rot and die especially after transplanting so be extremely cautious with watering. Keep dry in winter or when night temperatures remain below 10° C. Water it less than average if in bigger pots.
Fertilization: Feed them once during the growing season with a fertilizer specifically formulated for cactus and succulents (high potash fertilizer with a dilute low nitrogen), including all micro nutrients and trace elements diluted to ½ the strength recommended on the label. They thrive in poor soils and need a limited supplies of fertilizer to avoid the plants developing excess vegetation, which is easily attacked by fungal diseases.
Special need: It is suited for airy exposures. Provide very good ventilation. Nearly all problems occur as a result of overwatering and poor ventilation, especially when weather conditions are dull and cool or very humid. They must have very dry atmosphere.
Hardiness: It will not tolerate low temperatures (recommended minimum winter temperature 5° to 10° C)
Pests & diseases: These succulents may be attractive to a variety of insects, but plants in good condition should be nearly pest-free, particularly if they are grown in a mineral potting-mix, with good exposure and ventilation. Nonetheless, there are several pests to watch for:
- Mealy bugs: Mealy bugs occasionally develop aerial into the new leaves and flowers with disfiguring results, but the worst types develop underground on the roots and are invisible except by their effects.
- Rot: This species will not tolerate high humidity, frequently succumbing to fungal attacks if kept in sub-optimal conditions. If they are not watered and “aired” correctly, fungicides won't help all that much.
Propagation: Seeds or cuttings.

by Valentino Vallicelli
There are a total of 16 Photos.
Click here to view them all!
Cite this page: "Rhytidocaulon macrolobum subs. macrolobum" Text available under a CC-BY-SA Creative Commons Attribution License. www.llifle.com 14 Nov. 2005. 03 Dec 2022. </Encyclopedia/SUCCULENTS/Family/Asclepiadaceae/19560/Rhytidocaulon_macrolobum_subs._macrolobum>