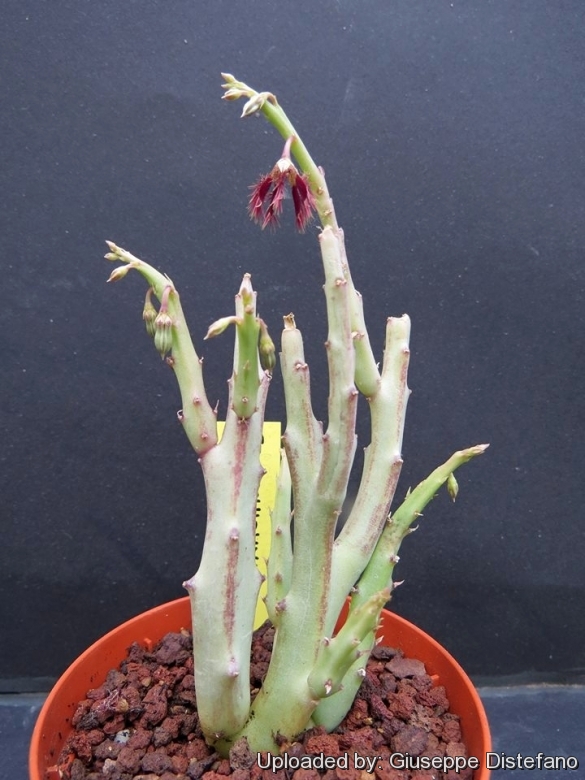 Origin and Habitat: Arabian Peninsula, North and South Yemen. Caralluma subulata is quite widespread in the western and southern coastal plains, lower foothills of the Tihama plain and and highlands from near sea level to 1500 m altitude. It occurs among Salvadora shrubs along the road between Al Lith and Adam with a single population (now extinct) near Wadi Kharar at the northern base of the Taif escarpment. Another small population, also extinct, occurred near Farasan village. It is most abundant from near the base of the Al Abna descent, (where a yellow coloured form was observed but not photographed as my camera was in the car some distance away) between Baljurshi and Namrah and at intervals along the road to Muhayl. Scattered populations also occur near Al Hagu the road to Rayth, and between Sabiya and Jabal Fayfa. Although the stems are not. grazed the plants usually shelter under acacias and in recent years many populations have succumbed to trampling and have either decreased in size or become extinct., and probably extends to Hadramout.
Habitat and ecology: Caralluma subulata grows in mainly on gravelly sand under acacias.

Description: Caralluma subulata has a superficial resemblance to Caralluma edulis but the slender erect branched stems are always bright green, are not rhizomatous and the flowering apex is not deciduous; the nodding hair-fringed flowers are a deep purple-red with apical tufts of hairs.
Taxonomic notes: Caralluma subulata from the Arabian Peninsula, and its African counterpart, Caralluma dalzielii, show a very great similarity with Caralluma adscendens var. fimbriata from India. Bruyns (1992), has already been put these three taxa into synonymy broadening Caralluma adscendens var. fimbriata geographical distribution. This could be taken to indicate that the differences such as round and acute angles varieties merit formal recognition at least as subspecies.
Caralluma subulata (Arabian populations) differs from Caralluna adscendens by:
Stems: 3 - 15 cm long, slender, erect, branched, always bright green, not rhizomatous and the flowering apex is not deciduous. The stipular rudiments reduced to lateral small bunches of trans-lucent thick minute hairs.
Flowers: Short-stalked, deep purple-red, nodding, hair-fringed. Corolla inside whitish, horizontally striped with wine-red (Yemen) or dark purple (Saudi Arabia). Corolla-tube inside finely hairy, hairs whitish, crinkled. Corolla-lobes inserted at an acute angle on the corolla (more openly spreading in Caralluma adscendens var. fimbriata) lanceolate, acuminate, narrowed towards the base, wine-red or dark purple in the middle, partly to strongly hairy, margin densely covered with long soft purple hairs. Hairs dark pink, 5 5 mm, thick, spreading, corolla tips green, glabrous; appendages of the corolla-lobes sometimes with a small tip between them. Outer corona lobes 3-toothed, the central tooth lanceolate.

Subspecies, varieties, forms and cultivars of plants belonging to the Caralluma adscendens group 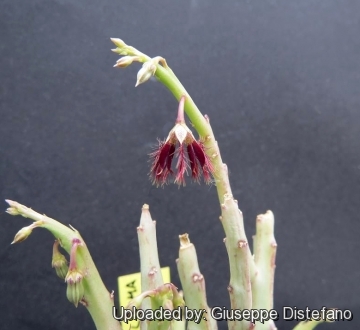 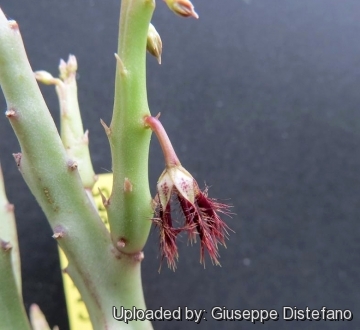 Cultivation and Propagation: Caralluma subulata is a relatively quick-growing species and not as difficult to cultivate as was originally thought. It can stand drought for quite a period, which is the only time when it loose its leaves. Keep dry in Winter. Water a little more than other succulents in Summer.