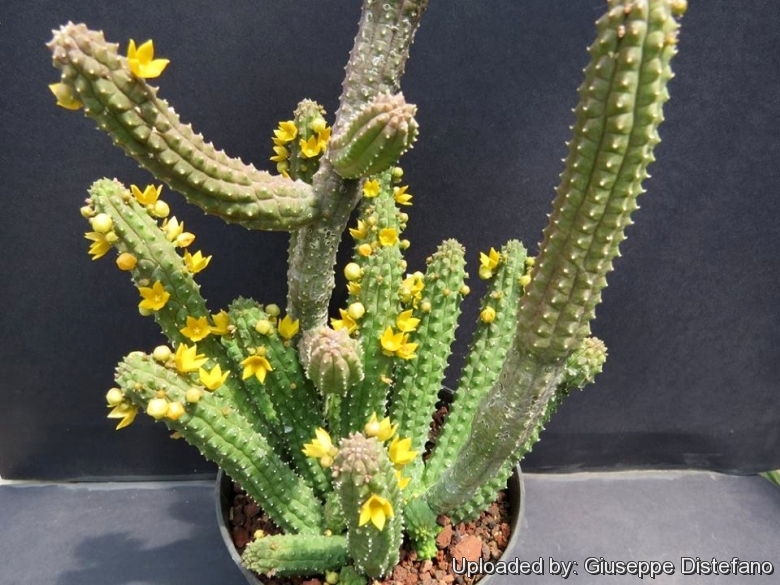 Description: Echidnopsis cereiformis is a small snake-like succulent with thin tufted cylindrical branches (as implied in its generic name which means “viper-like”). It is named “cereiformis” from its cactus-like appearance (also a good mimic of stems of Euphorbia mamillaris). Tiny lovely flowers sprout out of the entire length of each stem but mainly toward the tip in autumn, they are typically pale to dull yellow, but also brownish or dark brown-purple.
Stems: 7-30 cm (often up to 60) cm long. reclining to upright, leafless, green, dull dark green, brownish-green or reddish, rooted on the under side, round, with flatfish, tasselled ribs divided into 6-10 (usually 8) rows of broadly hexagonal, oblong, flat tubercles (podaria) each with a white central papilla (the remains of an undeveloped leaf), of a uniform bright green, firm consistence, papillose and faintly wrinkled surface. Buds from the transverse depressions on the ribs.
Roots: fibrous.
Leaves: Tiny, rudimentary, triangular, thick, finely papillose, ascending, very early Falling, borne on tubercles.
Flowers: Very small, fascicled, sessile, pale yellow to dull yellow, but also brownish or dark brown-purple, produced near the stems summits. Corolla campanulate 3-8 mm across, inner surface usually hairless, brown-purple to red-brown or bright yellow with bristles on the outer surface. Calyx tube, hemispheric. Lobes 5 triangular, acute, erect to slightly diverging, valvate. Corona bright yellow, outer lobes reduced to linear or triangular teeth in gaps between inner lobes or absent. Pollinia erect, globose, yellow.
Blooming season: Late summer to autumn.

Subspecies, varieties, forms and cultivars of plants belonging to the Echidnopsis cereiformis group 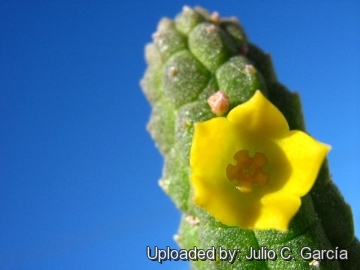 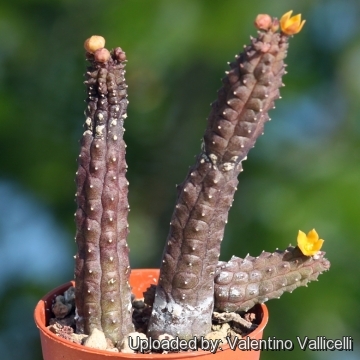 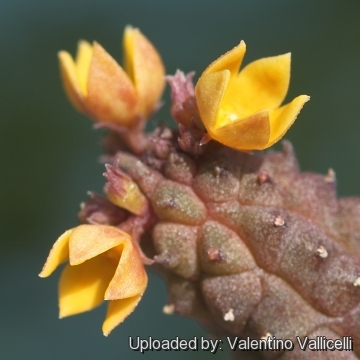 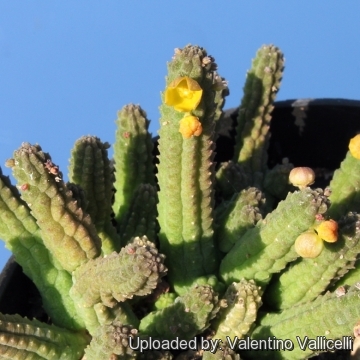 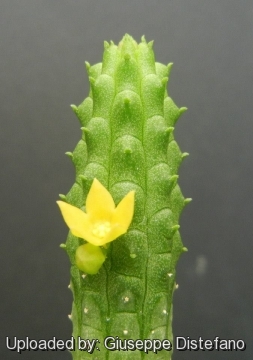 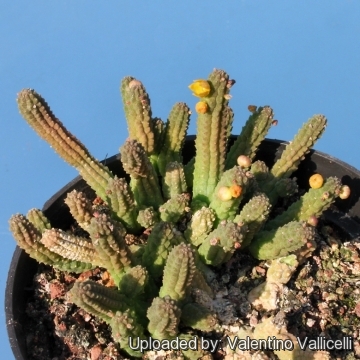 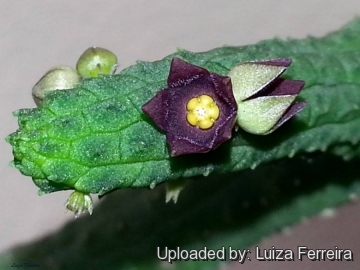 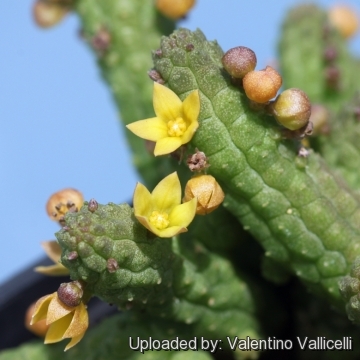 Cultivation and Propagation: Echidnopsis cereiformis is an easy obliging blooming plant, which is happy in any average succulent house. This plant is common to warrant any description, let it suffice to say that this plant is easy to grow and flower, and one which will tolerate most soils and growing conditions.
Soil: Since roots are quite shallow, use a cactus mix or add extra perlite or pumice to regular soil potting soil. A gritty, very free-draining compost is suitable, and clay pots help the plants to dry out between watering.
Watering: They require moderately watering through the growing season but enjoy plenty of water and some fertiliser in hot weather, this helps them to flower freely. Water more sparingly in winter according to temperatures. But, as with most asclepiads, it is unwise to leave them wet in cold weather.
Hardiness: Winter care presents no problems at 5°C with plenty of light.
Sun Exposure: Partial sun or light shade.
Pest and diseases: They are generally fairly easy to grow, especially if kept pest-free. They are susceptible to stem and root mealy bugs, and damage from these may well initiate fungal attack. If you do have problems with a stem or with basal rotting, you can reliably isolate the healthy parts, dry them off, and re-root them in moist compost.
Cultural Practices: Re-pot every 2 years.
Propagation: Easiest with stem cuttings. Allow cuttings to dry a day before planting. Stems must be laid (Not buried) on gritty compost and will then root from the underside of the stems. It can also be increased from seeds sowing in spring in moist, sandy peat moss. Barely cover seeds.