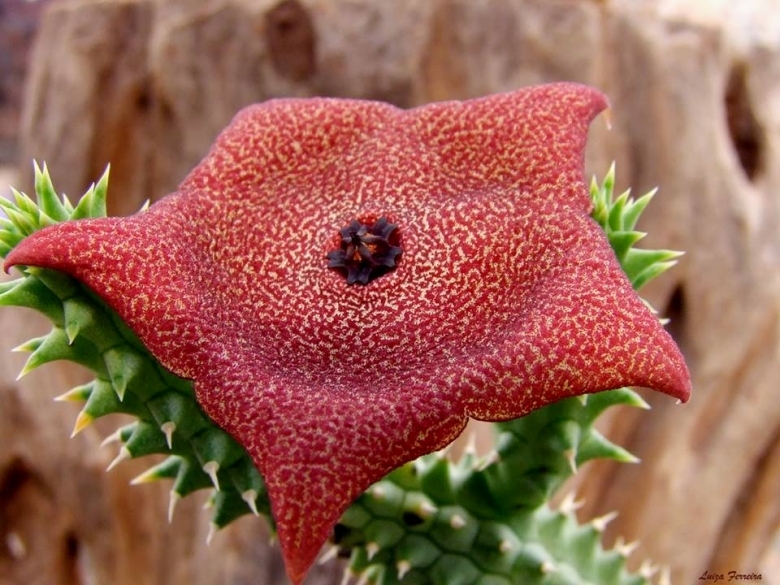 Description: Hoodiapelia beukmanii is a wild intergeneric hybrid of greatest interest involving a Hoodia sp. (possibly Hoodia gordonii) and a Stapelia sp. (Stapelia arenosa or maybe Stapelia stultitioides) as parents. It was originally described as Luckhoffia beukmannii by White & Sloane 1937 on the base of 5 plant of unknown origin collected by Beukman in 1933. This plants where clearly hybrids and differed from each other in flower. They should more properly named x Hoodiapelia beukmanii. This hybrid is free-flowering and partially fertile.
Habit: It is a perennial succulent shrub, up to 60-75 tall and broad, with 30-40 stems branched from near ground level.
Stem: 75 cm tall and 1 cm thick, ribbed, grey-green and hairless.
Ribs: About 8 straight or somewhat curved, prominent, divided in firm, conical tubercles, separated by deep valleys which almost interrupt ribs continuity. The knobbly surface helps to scatter the sun's radiation, minimising the amount of heat they absorb.
Inflorescence: 1-3 flowered.
Flowers: Saucer-shaped 6-7 cm across, on stalks to 3 cm long, strictly 5-lobed with a central depression. Corolla lobes triangular, slightly recurved and acute, finely palillose orange-brown to dark purple paler toward the centre and more or less spotted. Tube very small. Outer corona-lobes 2 mm long, dark brownish purple, truncate to linear lanceoalate and recurved at the tips. Inner corona lobes horned approx 3 mm long, fused basally with the cup-shaped outer corona between the lobes. Anthers covered by short wool. Seed-raised plants in cultivation show considerable variation in flower-size and colour.
Blooming season: Late summer.

Subspecies, varieties, forms and cultivars of plants belonging to the Hoodiapelia beukmanii group 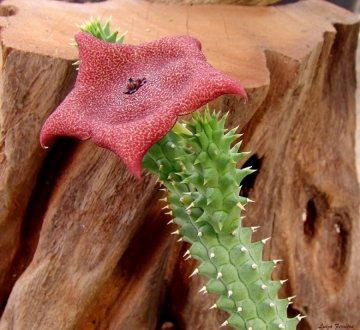 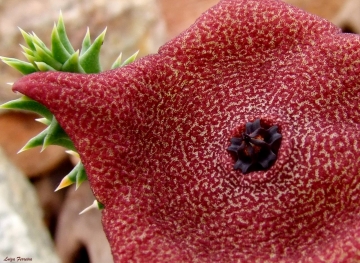 Cultivation and Propagation: It is one of easiest species to grow but prone to root rot due to overwatering and lack of fresh air.
Growth rate: Vigorous.
Potting medium: Since roots are quite shallow, use a gritty, very free-draining compost. Extra perlite or pumice is suitable, and clay pots help the plants to dry out between watering.
Moisture: Water normally in the growing season, sparsely in the winter.
Spring: In the spring leaving them out in the rain may provide them with the water they need.
Summer: In the summer months they will grow well in full sun or partial shade and tolerate heavy rain, but will be just as happy if the season is dry.
Winter: It is usually recommended to over-winter them in warm conditions (at 10° C), but despite their African origins they seem to grow well and flower without the extra heat which one might have thought necessary, and occasional temperatures near 0°C (or less) are tolerated, if kept dry.
Note: Indoors only in brightest position.
Crested growth: Unlike 'monstrose' varieties of plants, where the variation from normal growth is due to genetic mutation, crested growth can occur on normal plants. Sometimes it's due to variances in light intensity, or damage, but generally the causes are unknown. A crested plant may have some areas growing normally, and a cresting plant that looks like a brain, may revert to normal growth for no apparent reason. Any normal shoots should be removed to promote the growth of the crest.
Propagation: Propagation is usually best from seeds, but it can be done from cuttings too, but with uncertain results as the severed ends very rarely form a callus from where roots will eventually form. It is often grafted on Stapelia gigantea.