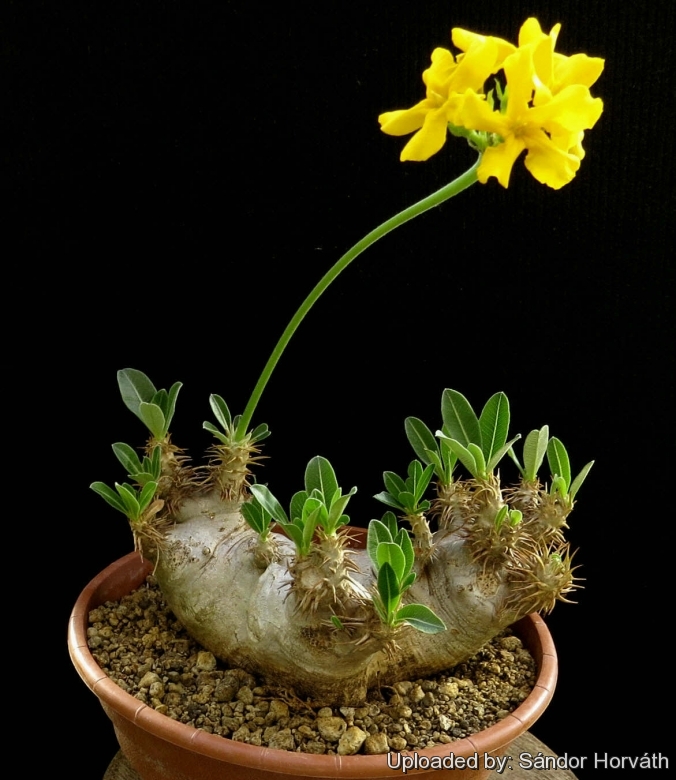 Origin and Habitat: Pachypodium densiflorum var. brevicalyx comes from a separate area, slightly north west of the south-central locus of var. densiflorum on sandstone at an altitude of about 200 metres.

Subspecies, varieties, forms and cultivars of plants belonging to the Pachypodium densiflorum group 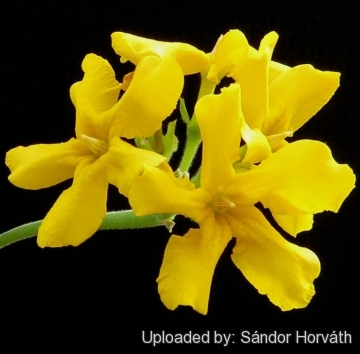 Cultivation and Propagation: Pachypodium densiflorum var. brevicalyx is one of the most attractive species in the entire genus that can be grown both indoors, as well as outdoors in warm climates. It’s a moderate grower and an impressive caudex can be steadily developed. In the winters it is deciduous, except in very tropical areas.
Frost resistance: It is tender and should not be exposed to frost (USDA Hardiness zones: 10 – 11).
Soil: Needs a draining cactus potting mix
Water: It requires regular water when the plant has leaves, contrary to popular belief, it likes a lot of water in the warm summers, as long as it's planted in a very well draining soil and considerably less water in the cool months. Indoors it is best to keep it on the dry side, or it is prone to rot. Do not let this specimen sit damp in cool weather.
exposition: It like full sun to light shade.
Maintenance: This Pachypodium will not require any pruning to look like a very interesting and unusual bonsai, but after several years it can outgrow its indoor location, requiring a 'pruning'. It has amazing regenerative properties.
Repot: Repot the plant every 3 years; this is quite tricky given all the spines. The best way is to wrap several layers of newspaper around the trunk where it is to be handled.
Warning: This plant has spines use caution when handling.
Propagation: Seeds or (rarely) cuttings. Fresh seeds results in a remarkable yield of new plants, perhaps 90% and seedlings grow fairly easily. Soak seeds in warm water for 24 hours before sowing in a 5 mm deep, sterile, moist sandy medium (4 parts fine and 4 parts coarse river sand 1 part sieved, well-rotten compost; 1 part perlite; 1 part vermiculite. Keep the mix moist and at a temperature of 27–35°C to ensure rapid germination. Seed start sprouting in just 3-4 days ( but continue to germinate erratically for about 6 month) they are also propagated by removal of branches from old plant (if they need to be pruned). They should be allowed to dry for 5 to 8 days before potting up, however the cuttings often fail to root.