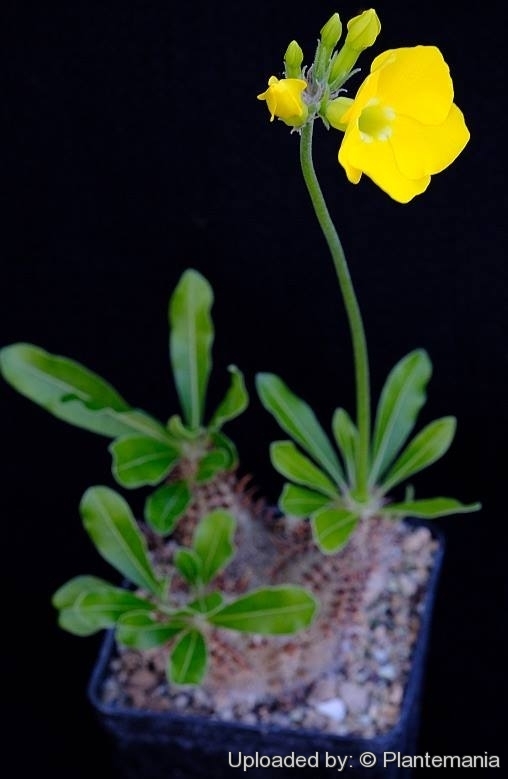 Origin and Habitat: Native of the massif of Makay, in the Menabe, Tulear province, South of Madagascar.
Habiata and ecology: Pachypodium makayense on grows step sandstone mountains.

Description: Pachypodium rosulatum subs. makayense (firstly described as Pachypodium makayense by Lavranos 2004) is a local or morphological form of the widespread and variable Pachypodium rosulatum. It has a large shining yellow flower with a white ring around the tube. However the distinguishing characteristics of P. makayense, appear to fall within the natural variation of P. rosulatum and it should be synonymized with the latter. 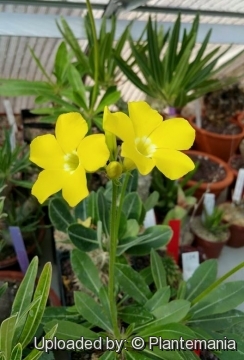 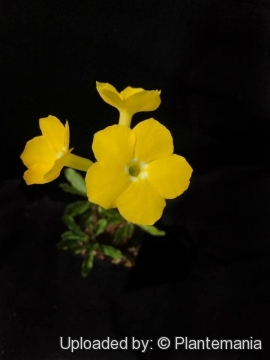 Cultivation and Propagation: It is one of the most attractive species in the entire genus that can be grown both indoors, as well as outdoors in warm climates. It’s a moderate grower and an impressive caudex can be steadily developed. In the winters it is deciduous, except in very tropical areas.
Soil: Needs a draining cactus potting mix.
Watering: Water sparingly in summer and give extra well-drained soil to avoid waterlogged conditions, no water from November to March. The watering program will change depending on temperatures and stage of growth, but it is best not to let this plant dry out completely for any length of time. Indoors it is best to keep it on the dry side, or it is prone to rot. Outdoors it must be protected from the rain in winter. Do not let this specimen sit damp in cool weather. The older it gets the less water it must receive!
Hardiness: It is sensitive to cold and should be kept totally dry in winter at or around 4°C. Protect from frost. It tends to lose its leave and go dormant in winter (USDA Hardiness zones: 10 – 11).
Exposure: It like full sun to light shade.
Maintenance: This Pachypodium will not require any pruning to look like a very interesting and unusual bonsai, but after several years it can outgrow its indoor location, requiring a 'pruning'. It has amazing regenerative properties.
Repot: Repot the plant every 3 years; this is quite tricky given all the spines. The best way is to wrap several layers of newspaper around the trunk where it is to be handled.
Warning: This plant has spines use caution when handling.
Propagation: Seeds or (rarely) cuttings. Fresh seeds results in a remarkable yield of new plants, perhaps 90% and seedlings grow fairly easily. Soak seeds in warm water for 24 hours before sowing in a 5 mm deep, sterile, moist sandy medium (4 parts fine and 4 parts coarse river sand 1 part sieved, well-rotten compost; 1 part perlite; 1 part vermiculite. Keep the mix moist and at a temperature of 27–35°C to ensure rapid germination. Seed start sprouting in just 3-4 days ( but continue to germinate erratically for about 6 month) they are also propagated by removal of branches from old plant (if they need to be pruned). They should be allowed to dry for 5 to 8 days before potting up, however the cuttings often fail to root. Seedlings grow fairly slowly compared to other Pachypodium species. Young plants have more conical spines and begin early to swell nicely, branch and even flower.