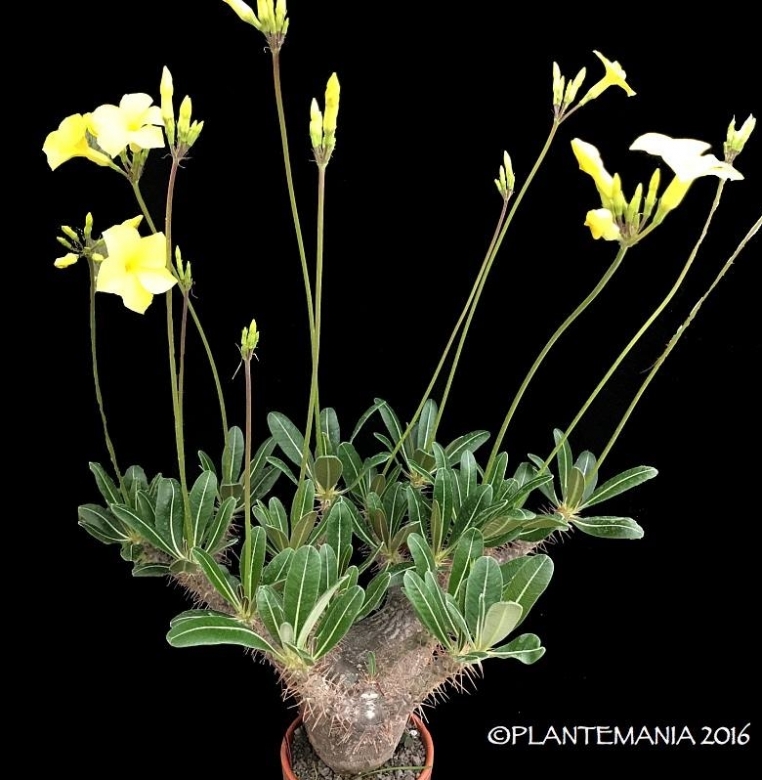 Origin and Habitat: Madagascar. Pachypodium rosulatum was the first of the Malagasy species to be described. It is widely distributed on the central plateau.
Habitat: Usually found in sunny positions on stony places where they are associated with other representatives of the flora of dry areas. This species can tolerate subzero temperatures in its natural environment in winter. They are found in xeric habitats and are naturally well adapted to the hot and dry environment in which they grow. The succulent stems act as water stores and enable the plants to survive the harshest conditions. The thick tuberous underground stems also help the plants to survive long periods without water. They can therefore withstand intense heat and long periods of drought.

Description: Pachypodium rosulatum is a wide spread and variable shrubby caudiciform species with several recognized forms and variety. It has (usually) the classic bottle-shaped trunk and is heavily thorned like most other pachypodiums.
Stem: The base (caudex) is smooth or with leaf scars, greenish silver, mostly spineless, bottle shaped and becomes quite swollen (10-15 cm wide and 25-30 cm tall) It develops stout forked branching mostly upright with some branching occurring from the lower base. Branches 9-12 cm in diameter, branchlets, often thin pale-brown and pubescent at the apex. The cylindrical "arms" are covered with stout paired conical spines, crown up to 3 x 2 m. Branching occurs where the plant has flowered.
Leaves: Petiolate (petiole 1-10 mm long) narrow oblanceolate, ovate or elliptical, cuneate at the base and dark green with a bit of a glossy look on the upper face, pubescent, coriaceous, deciduos. The leaves have a lighter middle vein and form a rosette around the tips of branches.
Flowers: The type plant has vivid yellow, oddly shaped , no scented flowers in clusters on long peduncles towards the top of the stems. The blooms can exceed 7 cm in diameter and are very attractive.
Blooming season: Blooms when young from February 'til May, even small 1 or 2 year old plants may flower.
Remarks: Pachypodium cactipes may merely represent a southerly form of the Pachypodium rosulatum complex but for now it is preferred to recognize it as a distinct species until further research clarifies its affinities. Its rich green glossy foliage, showy yellow flowers and ease of culture make it one of the more rewarding of the genus. 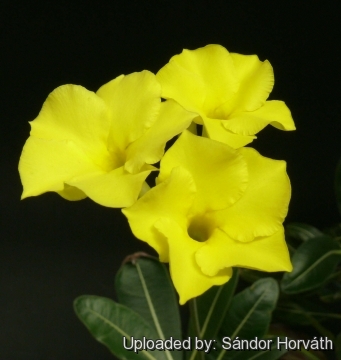 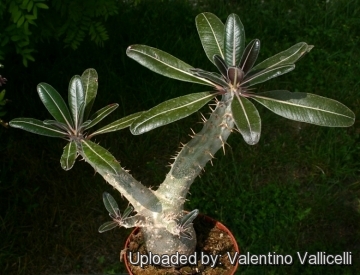 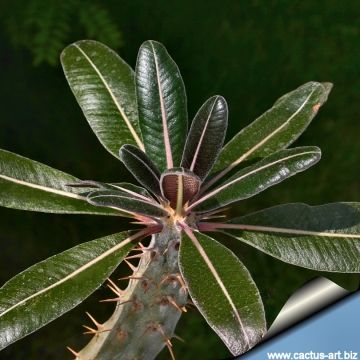 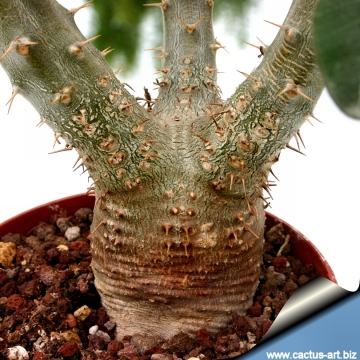 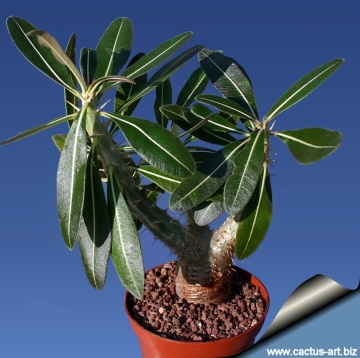 Pachypodium rosulatum Photo by: Cactus Art
Send a photo of this plant.

Cultivation and Propagation: Pachypodium rosulatum is one of the most attractive species in the entire genus that can be grown both indoors, as well as outdoors in warm climates. It’s a moderate grower and an impressive caudex can be steadily developed. In the winters it is deciduous, except in very tropical areas. Pretty cold sensitive- supposedly prone to rot if wet in winter cold. It may be grown as a specimen among rocks and low-growing plants in a hot rockery. It may also be grown in a heavy container on the sunny patio.
Soil: Needs a gritty, porous cactus potting mix that's not strongly acidic.
Watering: Water sparingly in the heat of the growing season to encourage new growth, foliage and flowering, and give extra well-drained soil to avoid waterlogged conditions, no water from late autumn to mid-spring. The watering program will change depending on temperatures and stage of growth, but it is best not to let this plant dry out completely for any length of time. Indoors it is best to keep it on the dry side, or it is prone to rot. Outdoors it must be protected from the rain in winter. Do not let this specimen sit damp in cool weather. The older it gets the less water it must receive!
Hardiness: It is sensitive to cold and should be kept totally dry in winter at or around 10°C, but it demonstrates some cold resilience if dormant and the soil is bone dry in winter. Protect from frost. It tends to lose its leave and go dormant in winter (USDA Hardiness zones: 10 – 11).
Exposure: It like full sun to light shade.
Maintenance: This Pachypodium will not require any pruning to look like a very interesting and unusual bonsai, but after several years it can outgrow its indoor location, requiring a 'pruning'. It has amazing regenerative properties.
Repot: Repot the plant every 3 years; this is quite tricky given all the spines. The best way is to wrap several layers of newspaper around the trunk where it is to be handled.
Warning: This plant has spines use caution when handling.
Propagation: Seeds or (rarely) cuttings. Fresh seeds results in a remarkable yield of new plants, perhaps 90% and seedlings grow fairly easily. Soak seeds in warm water for 24 hours before sowing in a 5 mm deep, sterile, moist sandy medium (4 parts fine and 4 parts coarse river sand 1 part sieved, well-rotten compost; 1 part perlite; 1 part vermiculite. Keep the mix moist and at a temperature of 27–35°C to ensure rapid germination. Seed start sprouting in just 3-4 days ( but continue to germinate erratically for about 6 month) they are also propagated by removal of branches from old plant (if they need to be pruned). They should be allowed to dry for 5 to 8 days before potting up, however the cuttings often fail to root. Seedlings grow fairly slowly compared to other Pachypodium species. Young plants have more conical spines and begin early to swell nicely, branch and even flower.