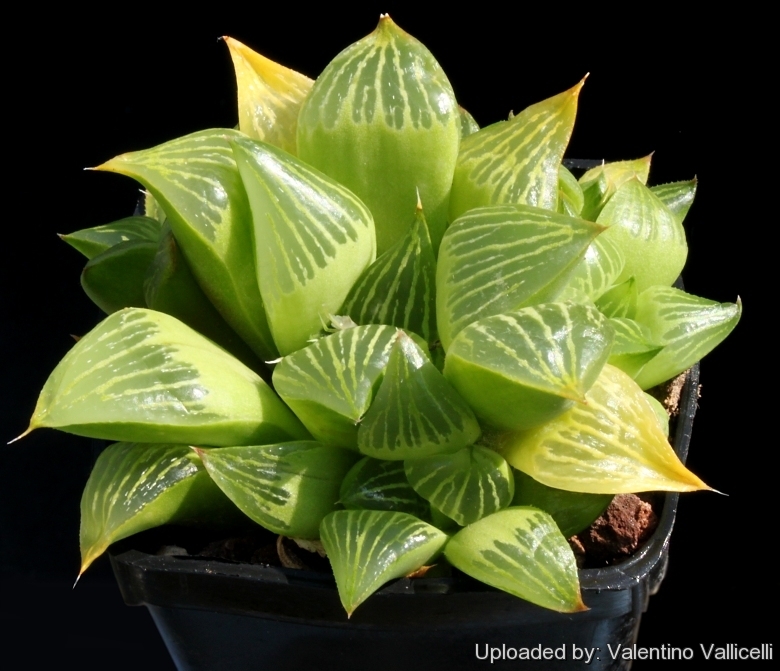 Origin and Habitat: Cape Province (Heidelberg to Riversdale), South Africa
Habitat: It grows on clayey hills, under bushes or among stones in undisturbed places where original vegetation is remaining. It overlaps and intergrades with Haworthia turgida, Haworthia mutica and Haworthia retusa var. nigra. On several places it grows near to Haworthia magnifica, in few cases natural hybrids were observed.

Description: Haworthia retusa is a well known succulent with shiny, green star-shaped rosettes which was introduced into cultivation at the beginning of the eighteenth century. The top surface of its leaves is smooth, with nearly translucent "windows" and veining, giving a very odd look to the plant. In its native habitat it is often buried in the ground up to the leaf part with the window. Most retusas in the field are not prolific and stay solitary or forms few branched groups. The opposite is true of the nursery bench, where most plants offered as "retusa" sucker freely and have the ability to form huge clumps. (These are often not even Haworthia retusa, but instead are Haworthia turgida) This plant is one of the most morphologically variable taxon of the genus and comprises many forms where each form is linked to others by populations of plants with intermediate characteristics. In cultivation both dark and light green forms may occur.
Stem: The leafy stem is very short.
Rosettes: Star-like, short and plump, with 10 to 15 leaves. Individual rosettes 5-10(-15)cm across.
Leaves: 2,5-4(-8) cm long, about 1-2 cm broad and 8-12 mm thick in the centre, fleshy, with stored water, multifarious, ovate triangular to deltoid, somewhat abruptly flattened on the upper half of the face and reflexed in the upper third (slightly recurved at tips), cuspidate with terminal bristle 3-6 mm long, rounded on the back and keeled in the upper half. Margins and keel with or without sparse fine white teeth. Leaves are smooth without spines or tubercles on both surfaces, lime green to glossy green, brownish-green or with purplish hue in bright light. The terminal end-area is more or less retuse (flat), and marked with dark windows with clear green vertical stripes.
Inflorescence: Flower-stalk up to 30 cm tall, single, unbranched, erect and wiry; raceme lax about 15 cm long; pedicels very short; bracts small, deltoid.
Flowers: 20 to 30 tiny, short-lived, small, inconspicuous, white with greenish-brown veins, and not especially attractive. Perianth about 2 cm long; limb half as long as the tube.
Blooming Time: In late spring to summer. Flower fairly readily (indoors too), once they're a certain age, and may even flower more than once in the same year.
Note: Of interest to botanists are the translucent windows that illuminate the interior photosynthetic areas of the leaves. These are called "window leaves" and represent a xerophytic adaptation.

Subspecies, varieties, forms and cultivars of plants belonging to the Haworthia retusa group

Notes: Haworthia retusa is a choice example of the window-leaf ( fenestrate leaf) adaptation found in many other succulent species like Peperomia columnella, Fenestraria rhopalophylla, Lithops karasmontana, Ophthalmophyllum friedrichiae, etc. These windowed plants usually grows buried in the ground with only the upper truncated portion of the thick, succulent leaves visible. Both the coalescent leaf pair of Lithops (shaped like an inverted cone) and the leaves of the other windowed plants have a more or less upright position with the leaf tips at the soil surface or protruding only a little from the soil. The leaf tips either are rounded or flattened. This windows leaf tip is free of green pigments. The greater part of the photosynthetic leaf surface, the mantle, is not exposed directly to sun light since the leaf is embedded into the soil and the solar radiation is transmitted by the colourless water storage tissue to the assimilatory tissue, so the photosynthetically active mantle gets light only from inside the leaf and not across the epidermis. Moreover this light is more or less evenly dispersed over the whole assimilatory tissue since the water storage tissue disperses the solar radiation. All species of Lithops and Ophthalmophyllum have coloured windows that matches with the colours of the soil and the pebbles of the plant's habitat. While other window plants such as Haworthia maughanii have dark green pigmented window areas. This green colour, however, does not result from a pigmentation of the window area but is the result of light that penetrates the window and is transmitted across the water storage tissue. 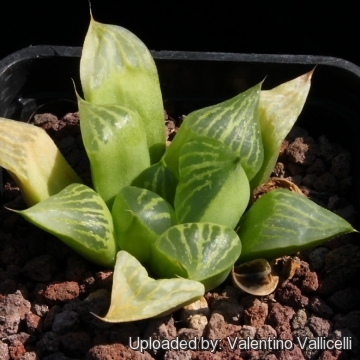 Haworthia retusa Photo by: Valentino Vallicelli
Send a photo of this plant.

Cultivation and Propagation: Haworthia are of easy cultivation and relatively low maintenance, which makes them a good houseplant, and can be an excellent subject for the beginning succulentophile (they can grow easily on window sills, verandas and in miniature succulent gardens where they are happy to share their habitat with other smaller succulent plants, or in outdoor rockeries). Haworthias are winter growers and are dormant in the hottest summer months.
Growth rate: They are relatively fast-growing plants that offsets freely to form small clusters quickly.
Soil: They are tolerant of a wide range of soils and habitats, but prefer a very porous potting mix to increase drainage. A non-acid soil is ideal. You can grow a plant in a 10-15 cm pot for years and have perfectly happy plants. For best results, use a shallow pot.
Exposition: The plant needs light shade to shade, but will take full sun part of the day. (with some sun exposure the leaf develops a nice reddish tint and remains compact).
Watering: During the hot summer months, the soil should be kept moist but not overly wet. During the winter months, water only when the soil becomes completely dry. Wet soil quickly causes root and stem rot, especially during chilly winter months. No water should ever be allowed to stand around the roots. Low ambient humidity is always needed.
Fertilization: The plants are fertilized only once during the growing season with a balanced fertilizer diluted to ½ the recommended strength.
Hardiness: Although the plant will survive mild frost if kept dry (hardy as low as -5° C) it should be protected from severe cold and prolonged frost conditions.
Rot: Rot is only a minor problem with Haworthia if the plants are watered and “aired” correctly. If they are not, fungicides won't help all that much. Care must be given in watering, keeping them warm and wet while growing, and cooler and dry when dormant.
Remarks: Haworthias are best planted in a shaded and airy part of the greenhouse, and not too close to the glass roof or sides of the house as the plants can overheat during hot spells.
Propagation: Haworthia are easily propagated by the removal of offshoots or by leaf cuttings in spring or summer. To propagate by leaf cuttings, remove a leaf and let it lie for about one month, giving the wound time to heal. Then lay the leaf on its side with the basal part buried in the soil. This leaf should root within a month or two, and small plants will form at the leaf base. They can also be grown from seed.