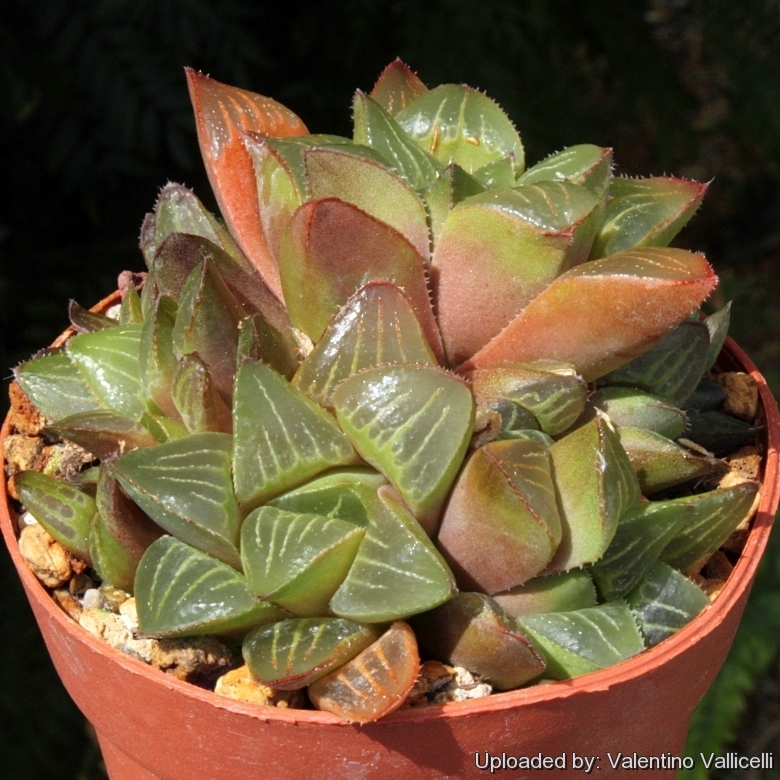 Origin and Habitat: South Africa (Western Cape: Overberg)
Habitat: Haworthia mutica grows almost buried in the ground on rocky shale ridges often in crevices. It shares its distribution area with Haworthia maraisii, Haworthia russouwii, Haworthia modesta, Haworthia heidelbergensis var. minor and Gasteria carinata. In many other embedded plant forms, including Bulbine mesembryanthemoides and many species of Opthalmophyllum and Lithops, light reaches internal chloroplasts in the buried leaf through windows of unpigmented cells on the exposed leaf tips. Small succulents resemble the soil, stones or dung of their habitats, or the shadows and woody stems of the shrubs that shelter them. Individuals that escape predation may be remarkably long-lived, up to 95 years in the case of Lithops plants.

Description: Haworthia mutica is one of the retuse-leaved haworthias, with compact flattened rosettes of prominently windowed leaves. It is mainly a non-proliferous species that do not offsets or offsets slowly, but most of the plants in cultivation derives from very prolific clones and form soon dense clumps. It is a variable species sometimes difficult to distinguish from to Haworthia retusa and Haworthia pygmaea.
Leaves: Thick geometric, truncated and triangular at apex, glaucous grey-green or glossy dark green with a characteristic bluish-brown colouration, often developing purplish cloudiness and striped in subtle shades of green. The tips are transparent and act like windows, allowing sun to enter inside of the leaf for chlorophyll processing.
Flowers: Small, two-lipped, greenish-white with pale purplish veins.
Blooming season: Mainly in Summer but it may flowers in any favourable season.

Subspecies, varieties, forms and cultivars of plants belonging to the Haworthia mutica group 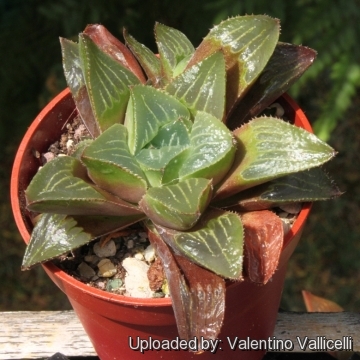 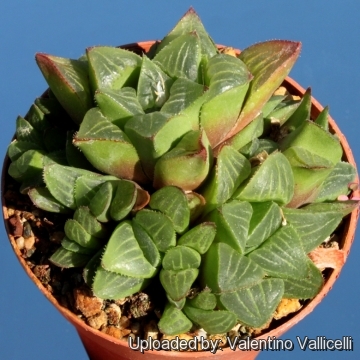 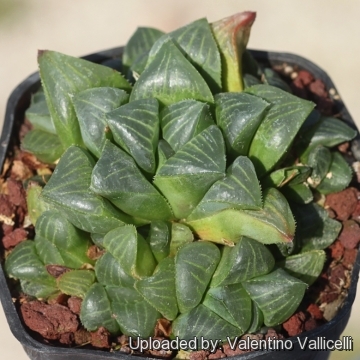 Haworthia mutica Photo by: Valentino Vallicelli
Send a photo of this plant.

Cultivation and Propagation: Haworthia mutica grows best in bright but indirect, or moderate light or redden nicely in full sun. It grows without any major problems in cultivation and is an ideal small indoor plant. Outdoors it suit in rockeries, but avoid frost.
Soil: They are slow growing and prefer a porous, well-draining soil.
Moisture: They need regular water, but don't let the soil be constantly moist or soggy and while not wanting to be excessively wet, they will be equally unhappy if the soil is kept dry for long periods.
Hardiness: They do best in warm dry climates. Frost Tolerance: -1.C° (or less for short periods).
Propagation: They should be propagated by seeds or vegetatively by leave cuttings or division of larger clumps.