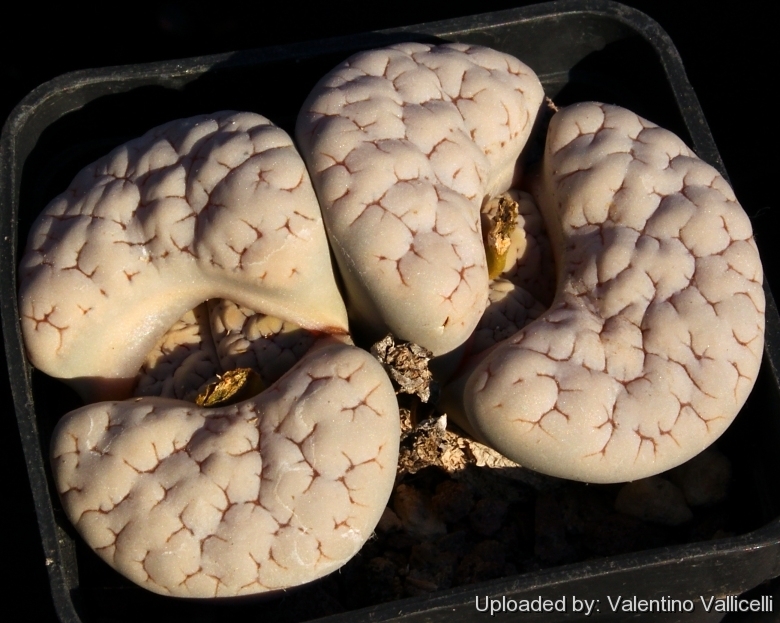 Origin and Habitat: Swakopmund, Namibia
Altitude: 300-400 metres above sea level.
Habitat: Lithops gracilidelineata var. waldroniae grows almost completely buried on pockets of windblown sand that gather in hollows between bigger blocks of marble and ironstone on the mountains. The soil is stabilized by a very thin crust, and is very friable when this crust is brocken.and look so much like the surface of ground that no one would suspect they of being plants, except when they produce their showy flowers. It strives in a very a arid area with less than 100 mm rain/per annum, but the extreme aridity is attenuated by the frequent, often dense costal fog (the humidity of the ocean furnish part of the water needed by this plants). The nocturnal condensation is also an important and conspicuous source of humidity, that (especially in winter) may wet the ground down to 2 cm in depth. The root system of the Lithops is sallow and allows them to uptake the maximum of this humidity.

Description: Lithops gracilidelineata var. waldroniae is a distinct variety of Lithops gracilidelineata easily recognizable for the clear pastel body and knobbed top with fine brown lines. The network of thin brown lines, which is the prominent feature of the top surface shows a is quite uniform in the way it anastomises and also in its colouration. Its face is very clear in colour and has one of the most opaque windows to be found in the genus.
Habit: It rarely forms more than a single head or, if branched, forms only few bodies in a clump. It is variable, but conforms to the typical Lithops morphology: two thick, fleshy windowed leaves separated by a crack from which a yellow flower appears. The windowed part allows light into the inner portion of the leaf where the process of photosynthesis is carried out. Old leaves persist for one year usually, often for two years.
Bodies (paired leaves): Top-shaped, truncate in profile, more or less convex, 30-50 mm 1ong, 20-38 mm broad; fissure shallow, faces flush, round to mostly elliptic, window opaque; top knobby, various shades of creamy-white or greysh-white. Windows very opaque an not evident, Rubrications usually a network of brown lines, mostly set in a fairly regular network of shallow valleys, margins not clearly distinguishable
Flowers yellow 20-45 mm in diameter. Sepals 8 mm long, 2-3 mm broad.
Fruits: 6(-7)-chambered, profile rotund to boat-shaped, top convex to peaked, faces broadly elliptic. 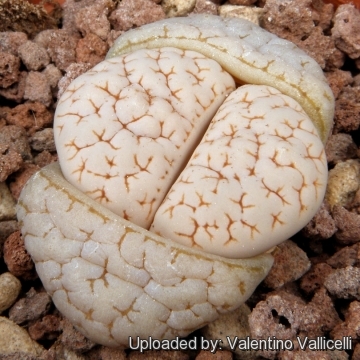